Day 5 in Rīga and I’m still trying to figure out why it is different than Tallinn.

The Old Town of Tallinn had a lovely, postcardy, medieval movie set feel contained within the walls. Cross any of the busy streets circling it, and it could have been any city with some big buildings and downtown malls.

Rīga has a larger Old Town, but it feels like people live and work here too. And you are pulled into Central Rīga by a statue and beautiful promenade to a gilded church and amazing architecture. 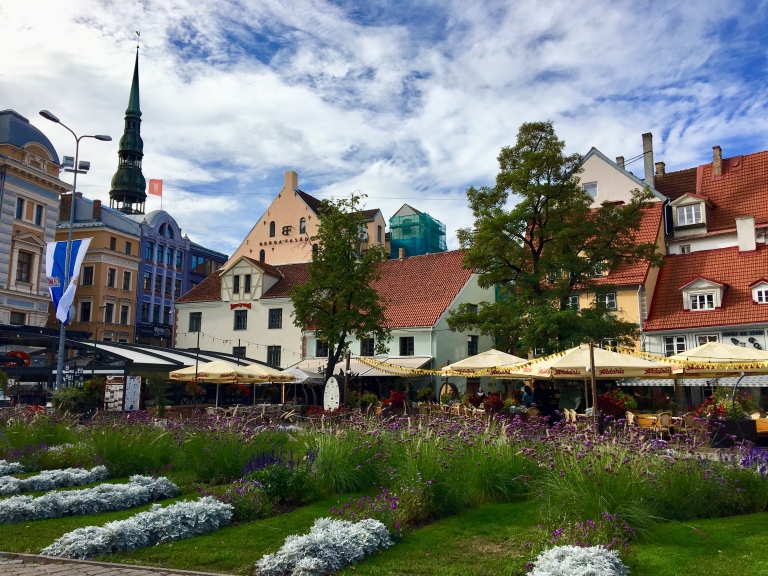 St Peter’ Church is about 800 years old, so one of the oldest medieval buildings in the Baltic

The only decoration inside are the large heraldic shields and art displays, including weaving and traditional Latvian mittens 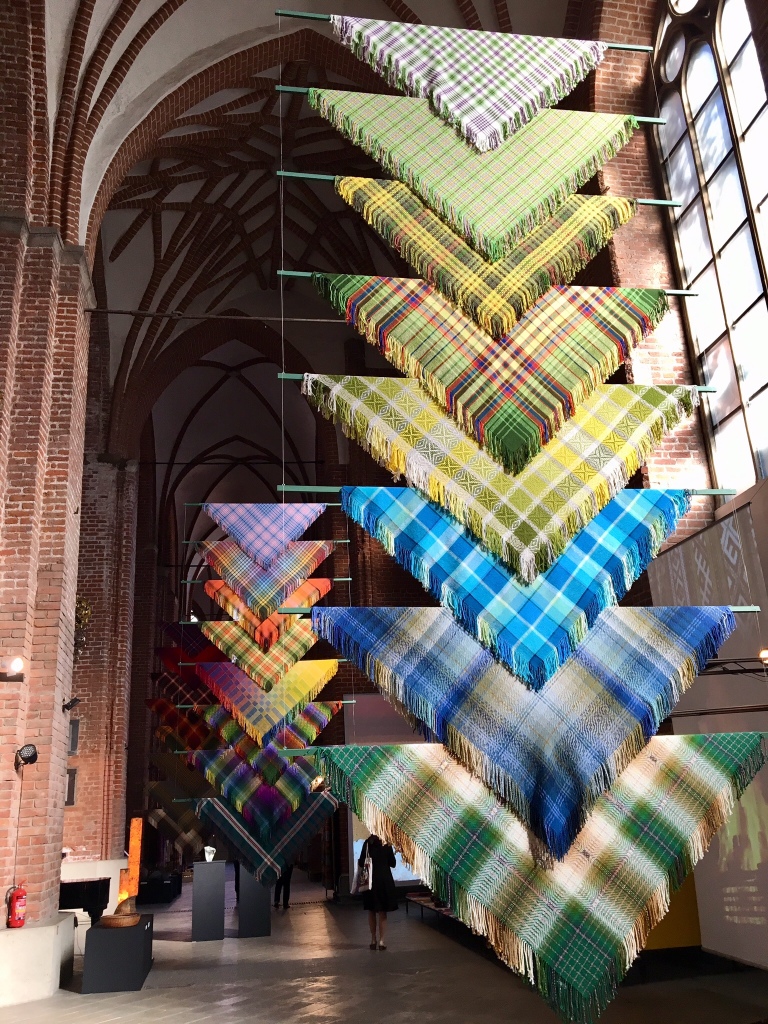 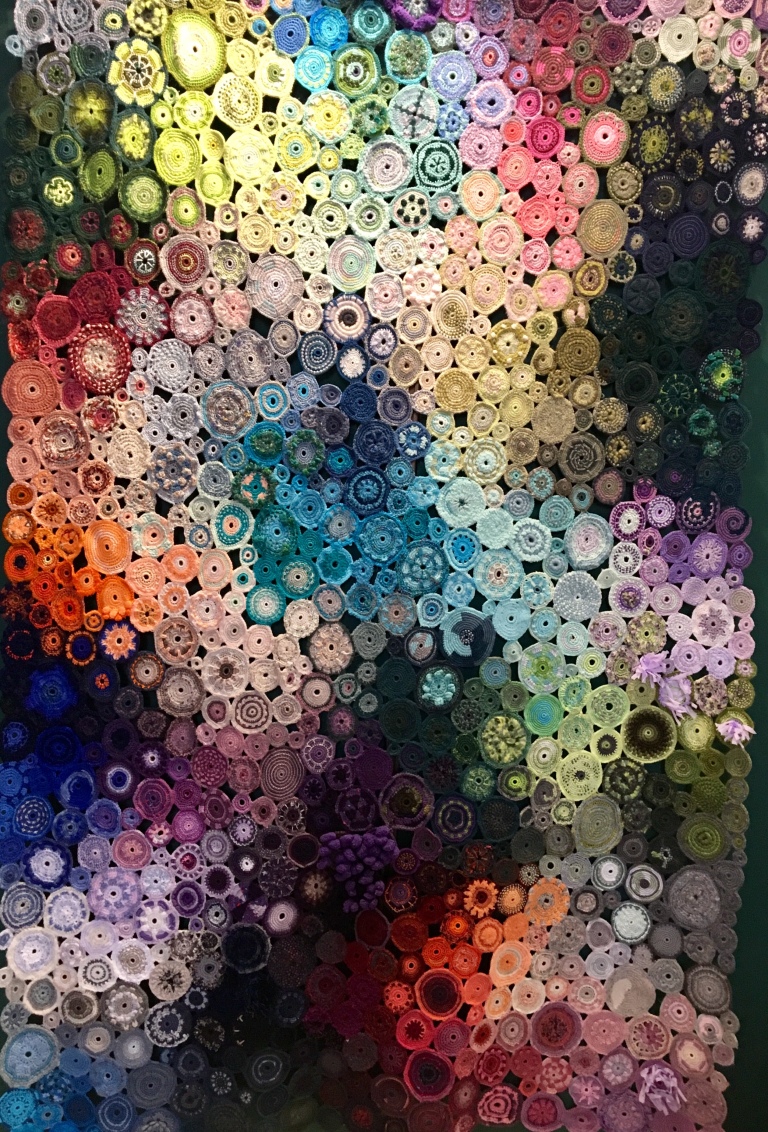 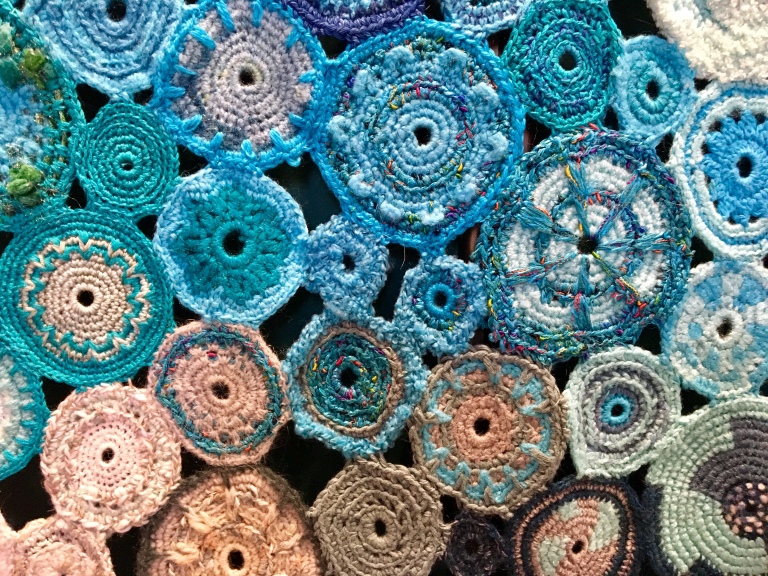 Church straight ahead is the Dome cathedral

Dome Cathedral founded in 1211 with Romanesque, baroque and gothic architecture added on from the 13th to 18th centuries. Was Catholic but now Evangelical Lutheran.

Straight ahead is the Latvian Academy of Science. The four WW1 Zepplin hangers (bit right and down) are now the City Market. The TV Tower is on the right. 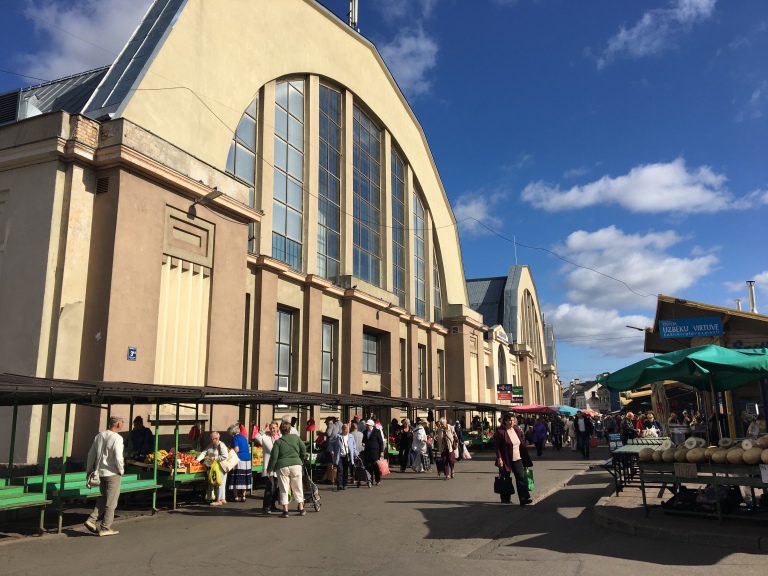 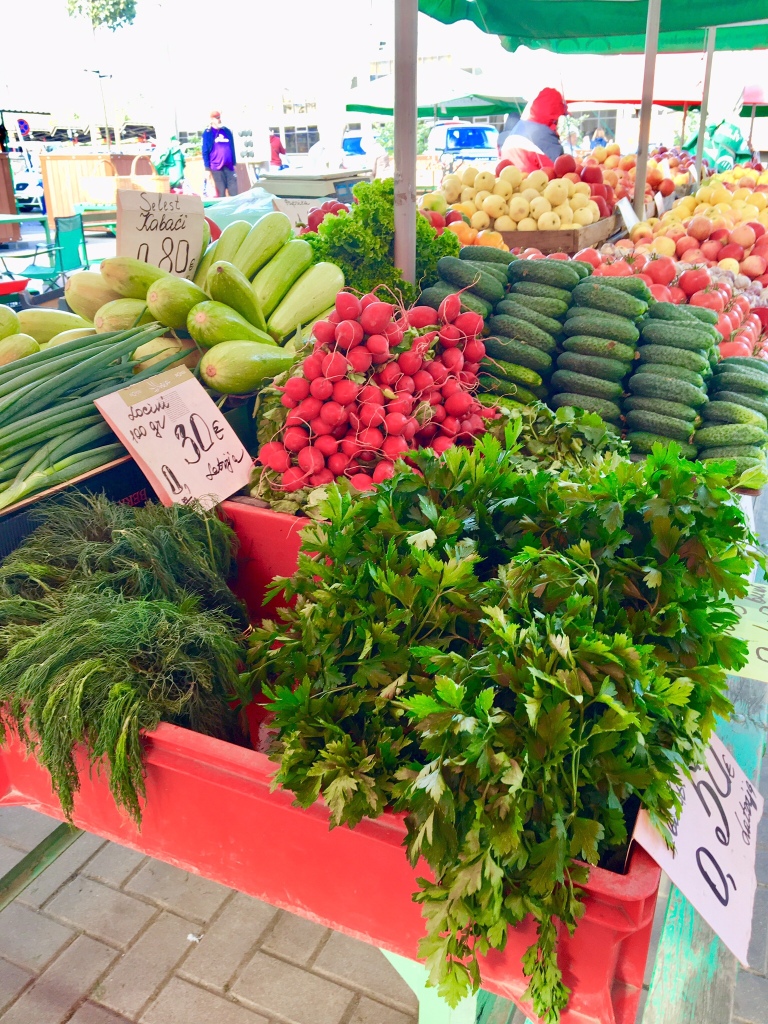 Blackhead’s House was originally built in 1344 as fraternity house for the Blackhead’s Guild of unmarried German merchants. It was destroyed but from the blueprints it was rebuilt in 2001 for Rīgas’s 800th birthday.

Next door is the Museum of the Occupation of Latvia 1040-1991. It is closed for a major rebuilt.

I was very impressed by a like museum in Tallinn, and the history of Estonia, Latvia and Lithuania is very similar for that period.

During the Nazi occupation the 30,000 Jewish people of Rīga were contained by barbed wire in a small area behind the City Market, then marched 10 km to a forest area where they were killed and buried in mass graves. 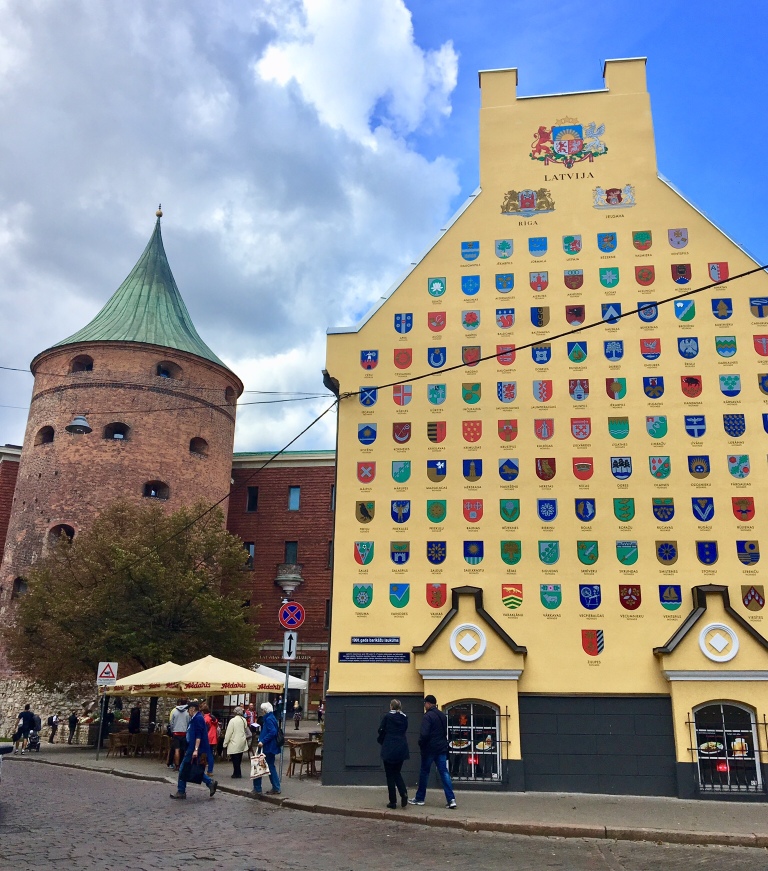 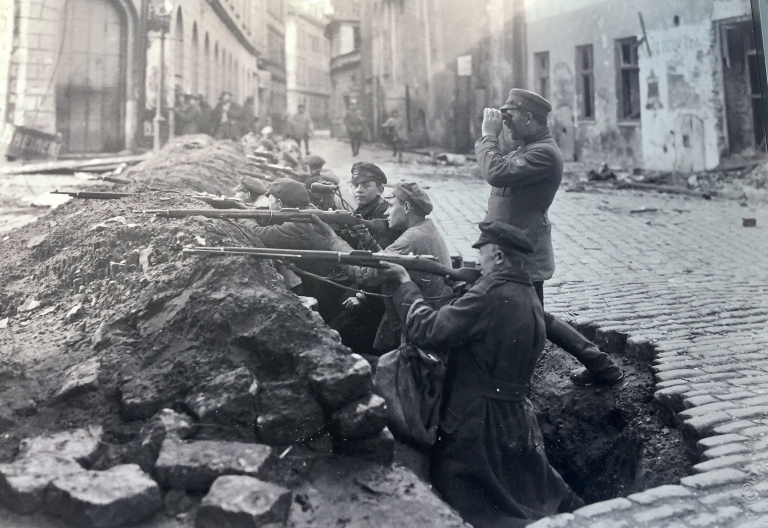 The Freedom Monument draws you to a wide promenade that flows from the Old Town to the new.

It crosses over a river and a huge green space, and leads you to the Nativity Cathedral and Alberta Iela. 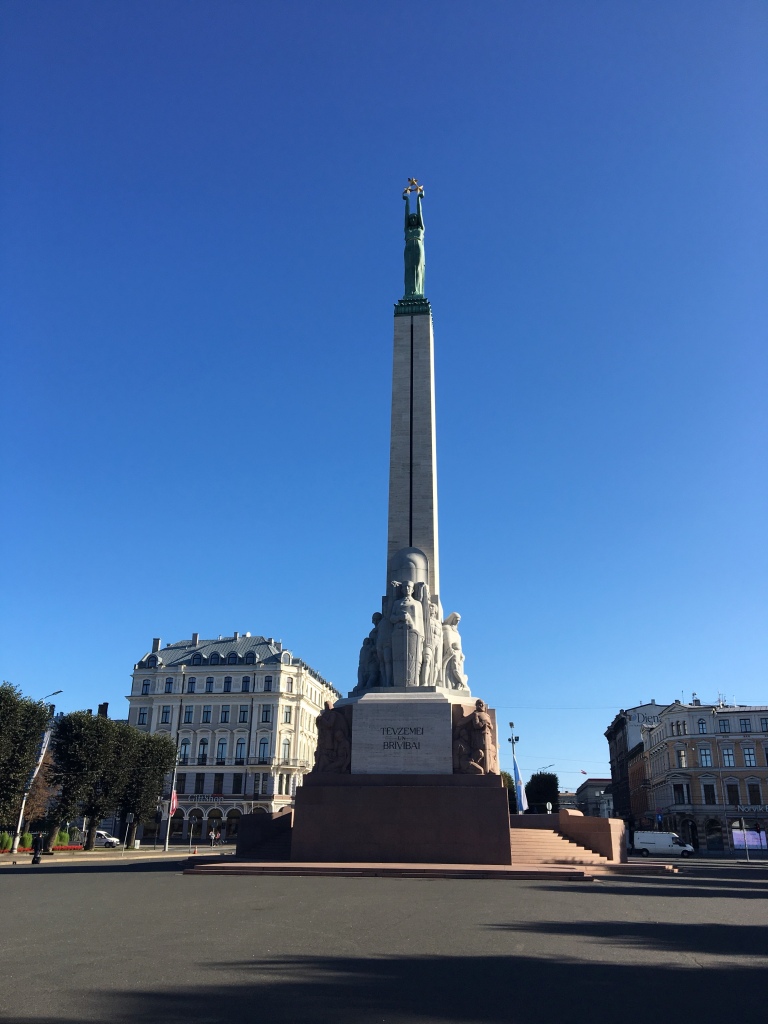 The first version of Old Saint Gertrude (patron saint of travellers) Church was built in 1478 outside the town walls so visitors arriving after the gates were closed could still give thanks for a safe journey.

Not sure about the reason for a Canadian flag… 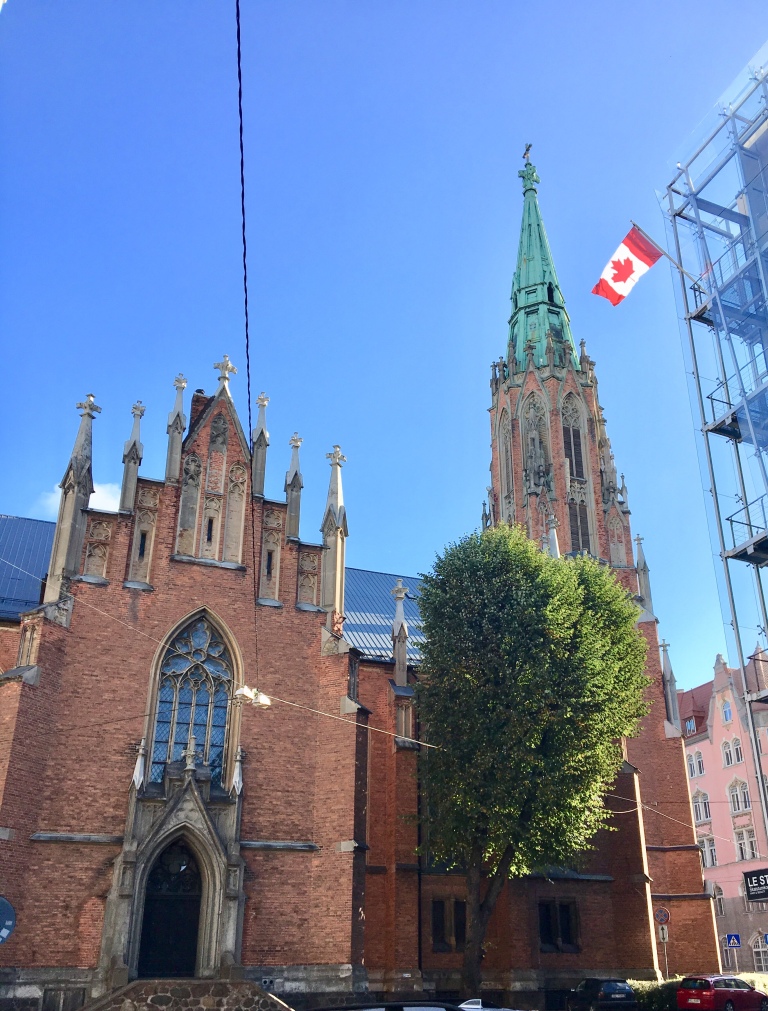 Rīga has the greatest number of buildings in the Art Nouveau style. I read over 750 buildings, or one-third of Rīga. This was because at the peak of the style’s popularity in late 19th/early20th century, Rīga was at a peak of a financial boom.

This is not the Art Deco of the 1920’s, but slightly older version called ‘Jugenstil’ or youth style. Most the buildings are multi-floor, and Alberta Iela (Albert Street) is pointed out for it’s collection. 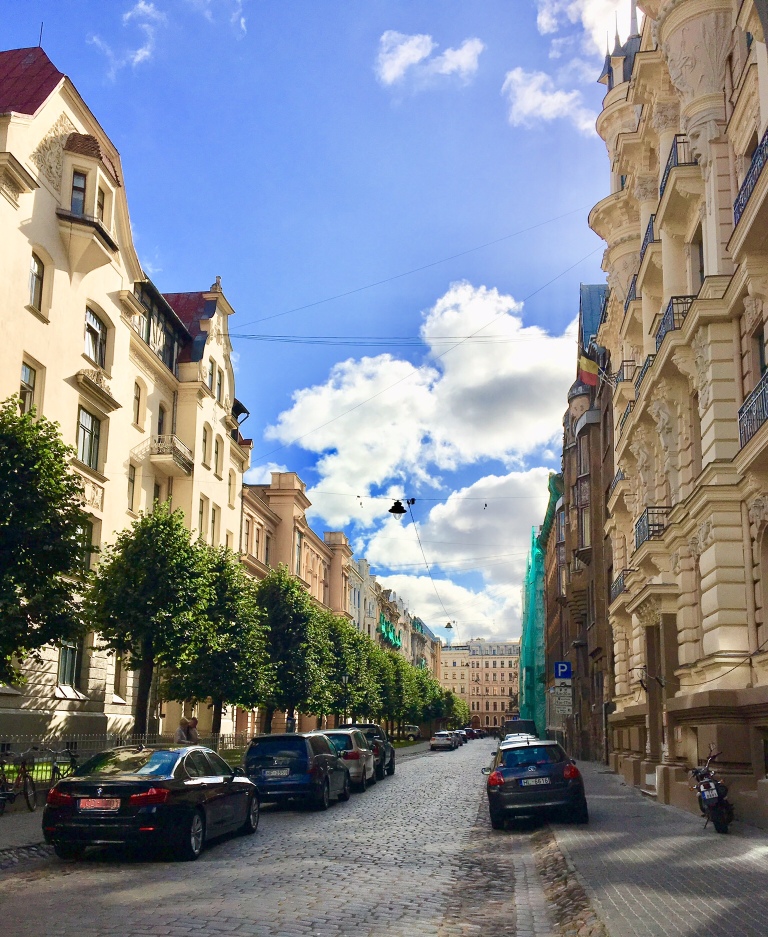 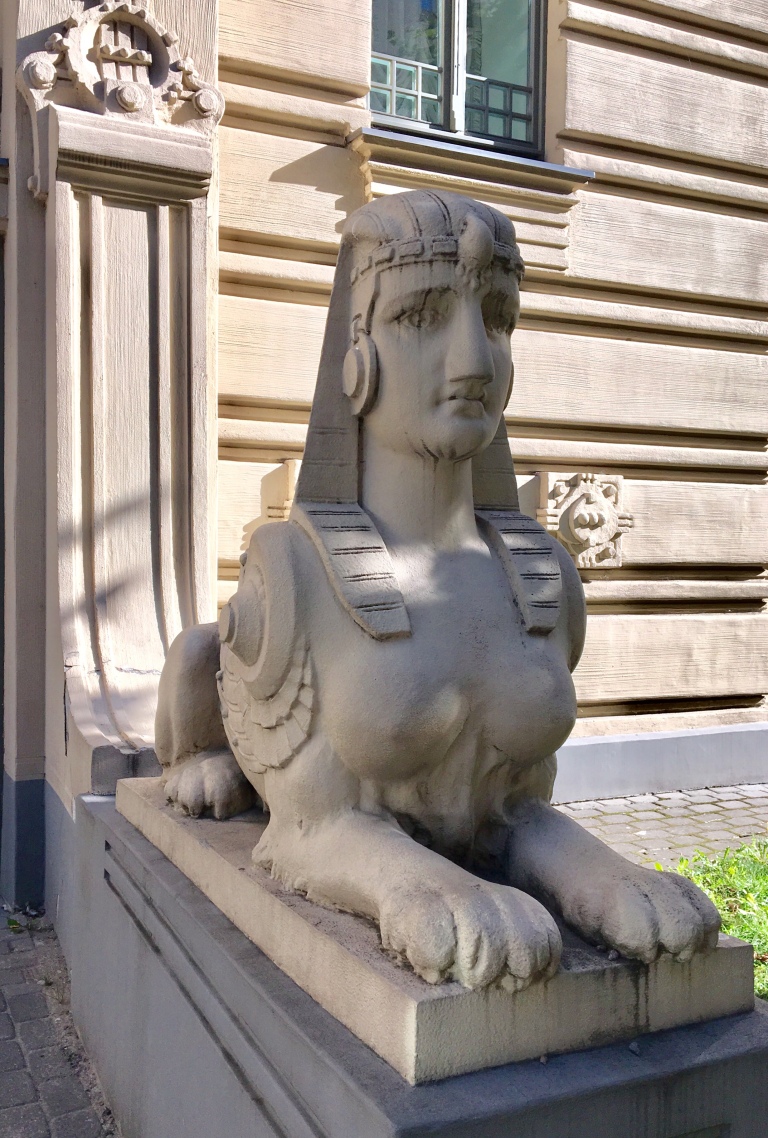 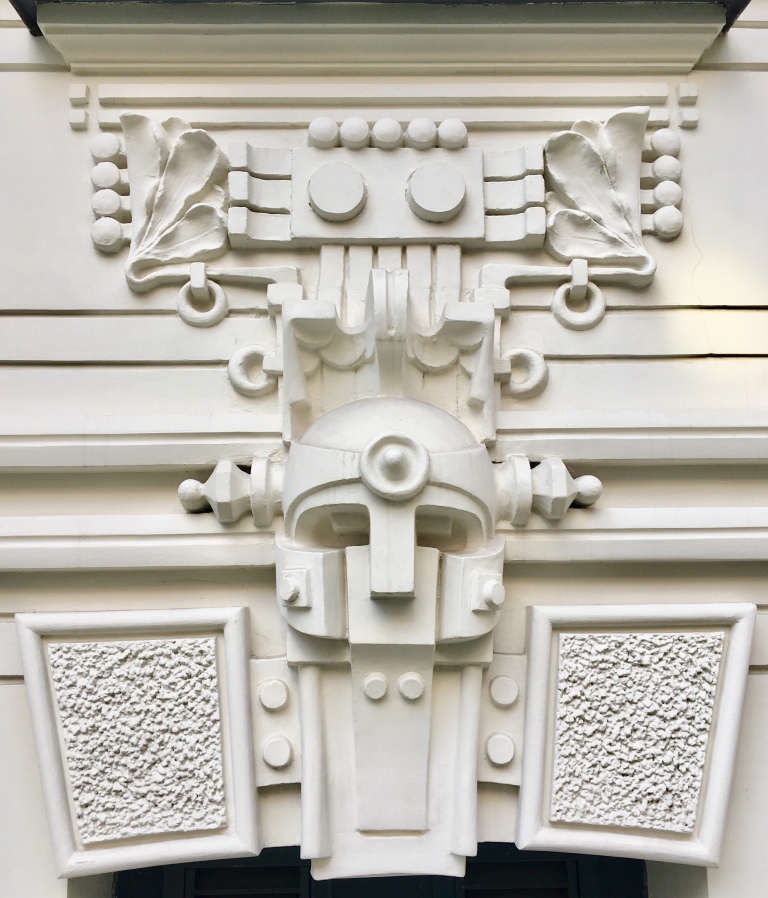 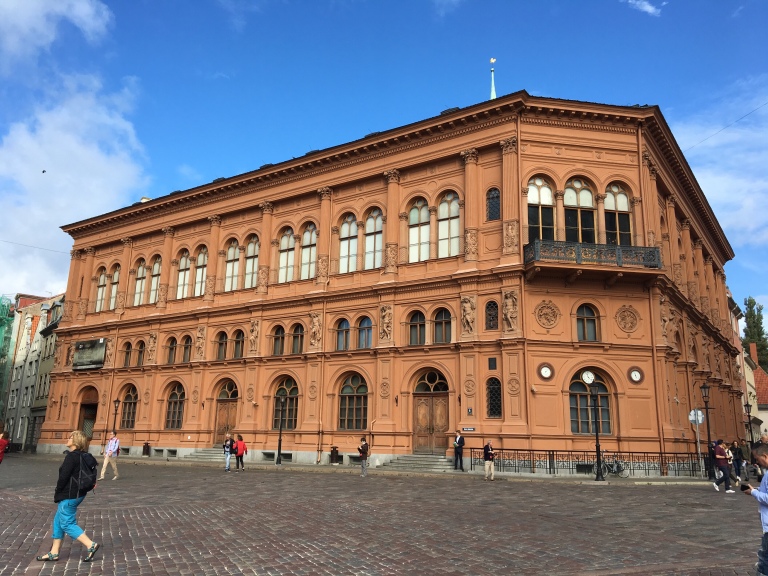 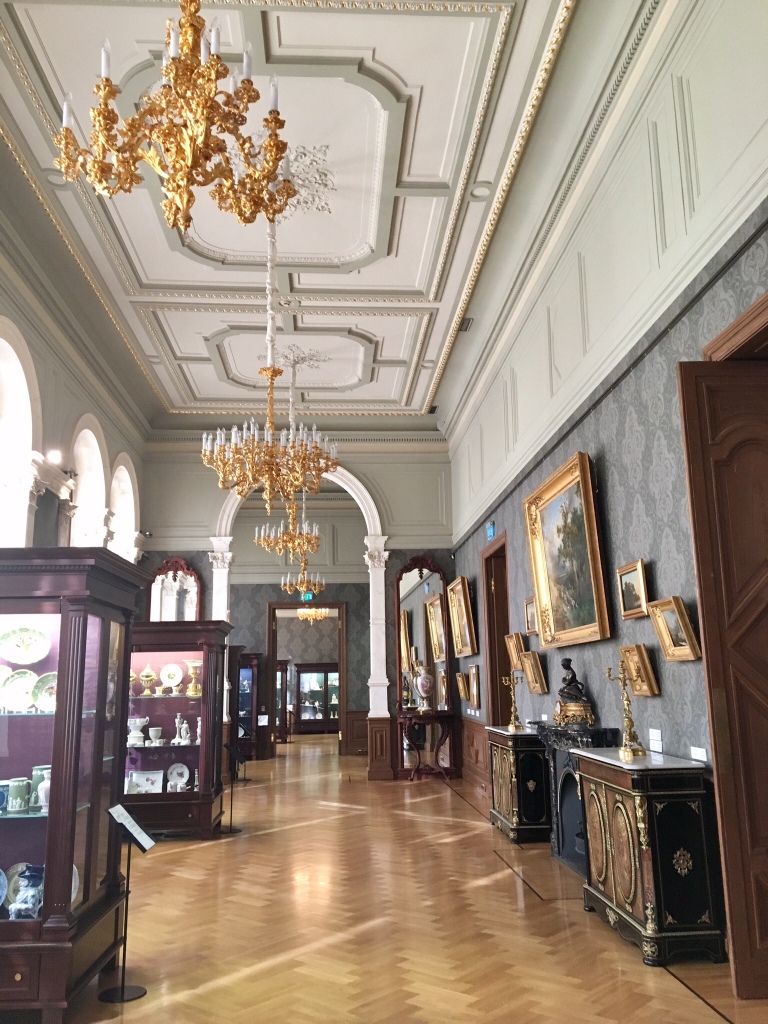 The new buildings are exciting too, though I’m seeing maple leaves everywhere! 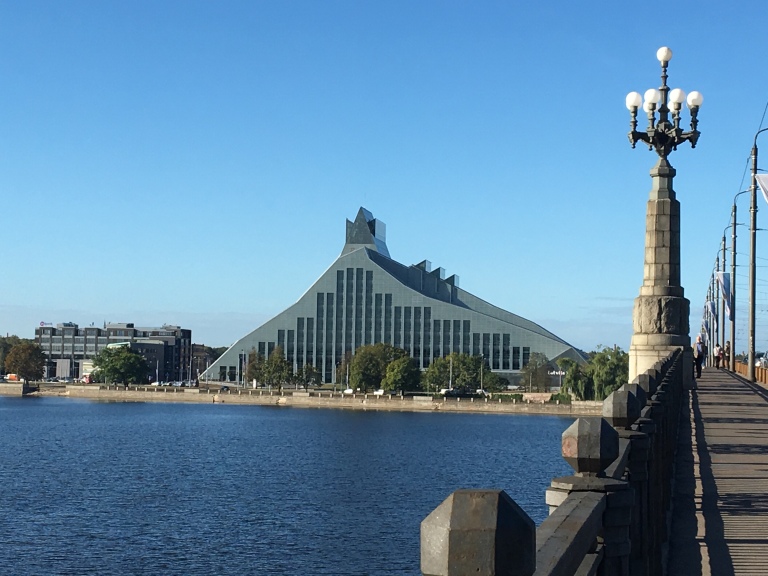 Rīga Art Space, though it appears just the roof with bells is new? 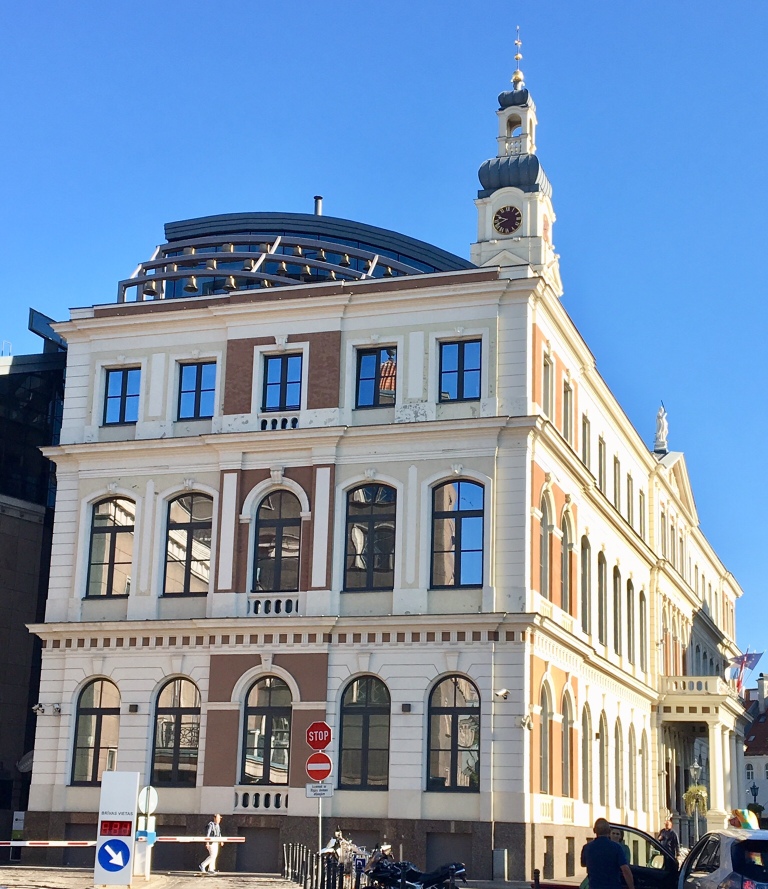 Latvian food is pretty rib-sticking and I’m starting to see the eastern influences. They did spend fifty years behind the Iron Curtain with Georgia and Armenia.

‘Shashlik’ or shish kebab is common with chicken, pork or salmon. And very delicious, especially with sauerkraut! 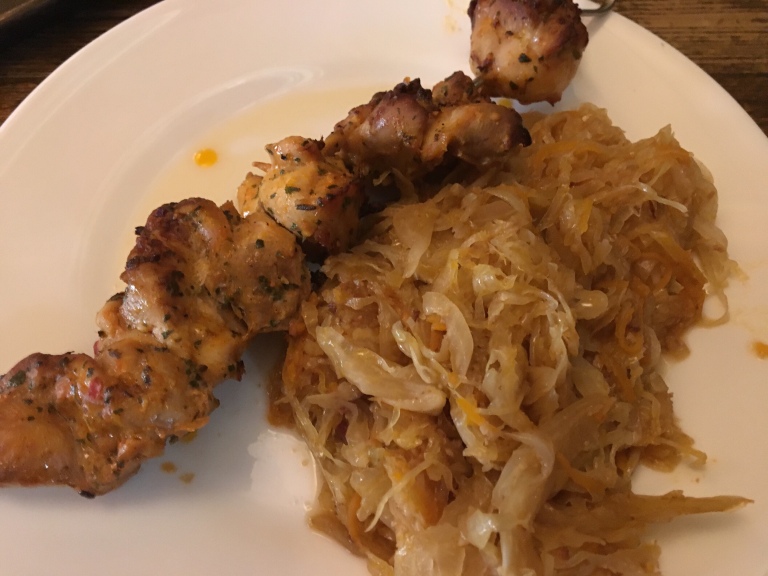 Salads are good too. Lots of beets, mushrooms, cabbage 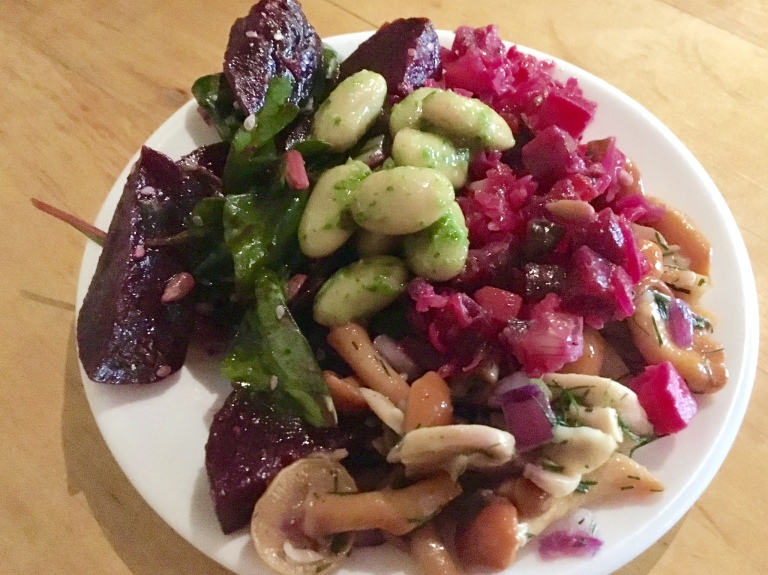 They like their heavy bread too. I bought these for my travel tomorrow as I think they will hold me over!

Black Balsam is a local speciality – a 45% alcohol made from bark, herbs that is supposed to ‘cure what ails you’ but looks like used motor oil….

So what did I decide about Rīga? I loved the charm of Tallinn but Rīga is bigger and definitely has a wider variety of architecture. Yes, too many wooden and amber shops, but I liked that it felt like a living and evolving city.

Tomorrow I’m off to Vilnius, my third Baltic city, with a one day stop in Siauliai on the way. See you in Lithuania!

Hopefully the cobblestones are softer there!