After Jodphur it was off by train to Jaisalmer. It was supposed to be 18:00-23:25 but we were two hours late. Thankfully my guesthouse owner still cheerfully picked me up!

Jaisalmer! Called the ‘ Golden City’ because most buildings are made from yellow sandstone. It has a gorgeous warmth and glow.

Jaisalmer! It’s all about the fort! But it is very different than Jodhpur.

First, it is living fort with 4000 residents along with guesthouses, restaurants and souvenir shops for the tourists.

This is an aerial view I borrowed to try and show you the size. 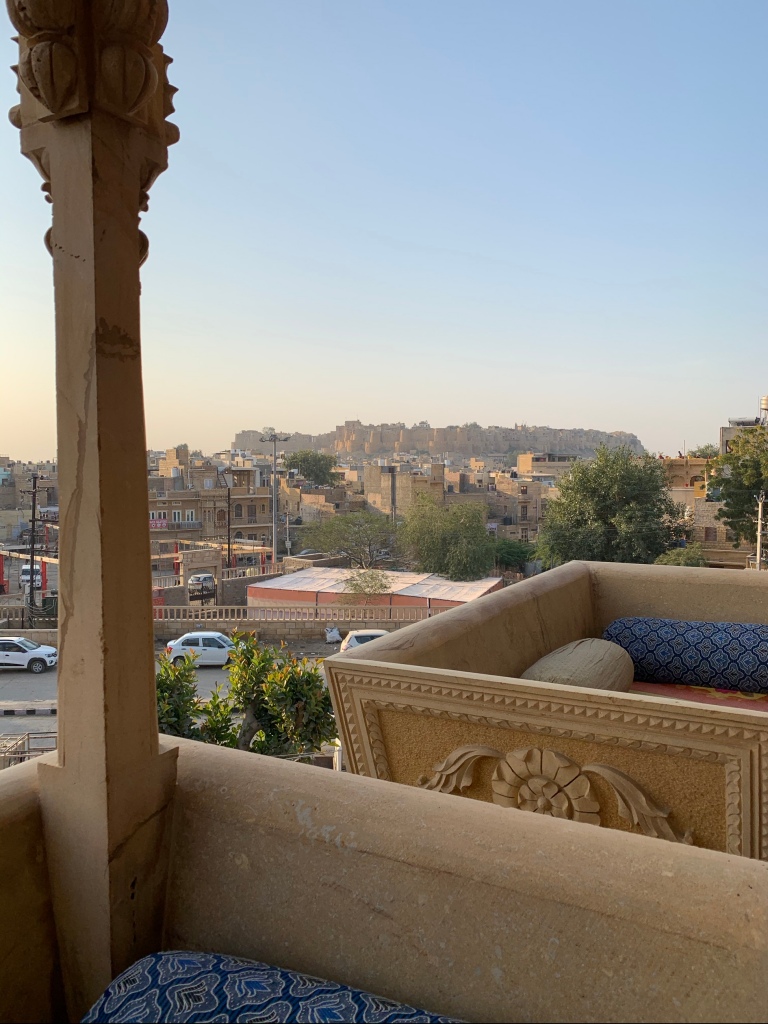 It was built in 1156 by the ruler Jaisal. It’s 5 kilometres around with 99 ramparts that were used for lookouts.

And I keep seeing giant sandcastles!

Inside is a maze of little streets with resident homes, shops, restaurants, guesthouses and temples. 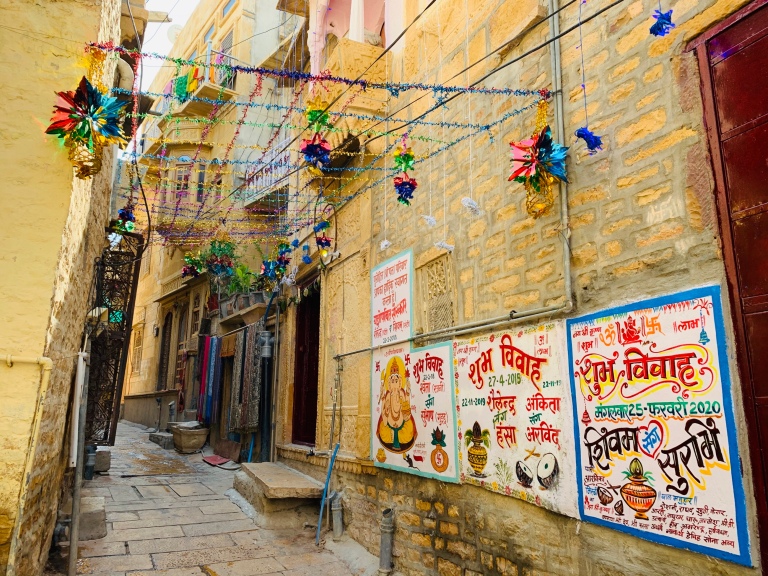 There is also a small palace in one corner. 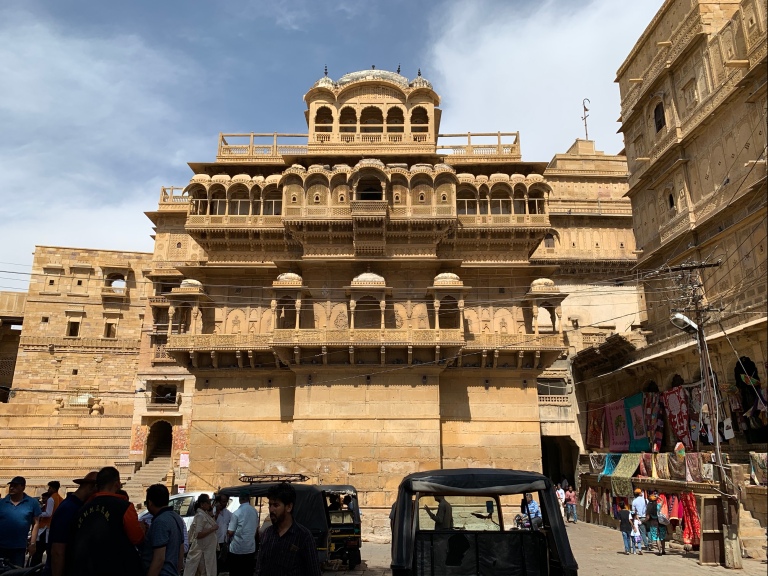 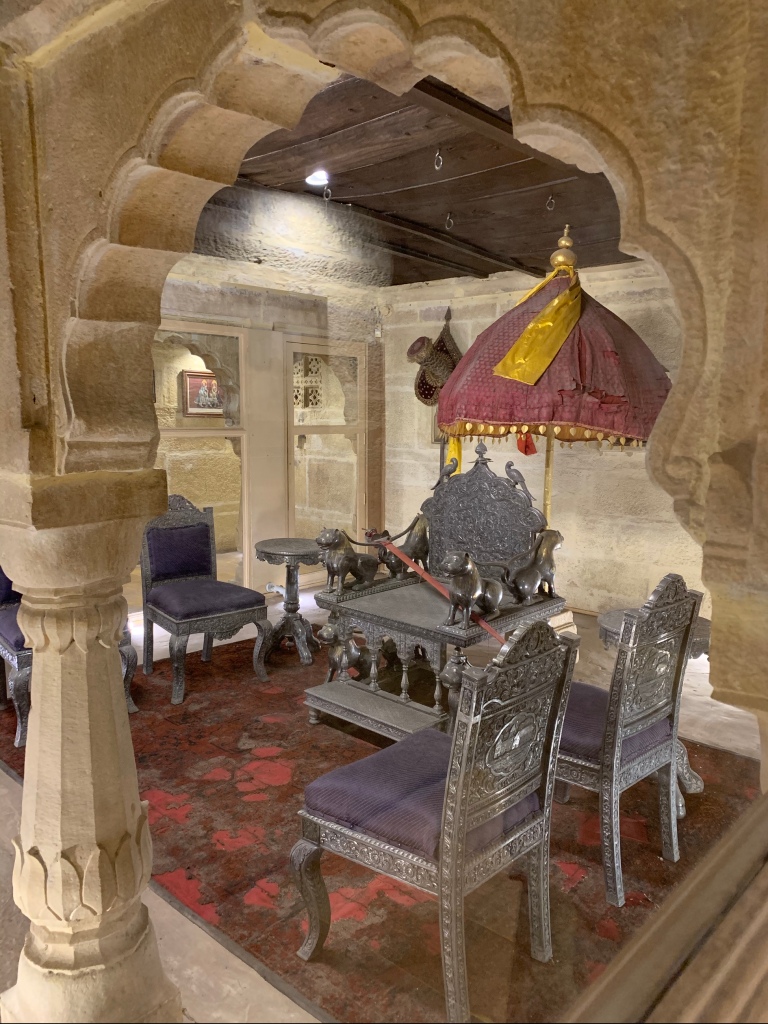 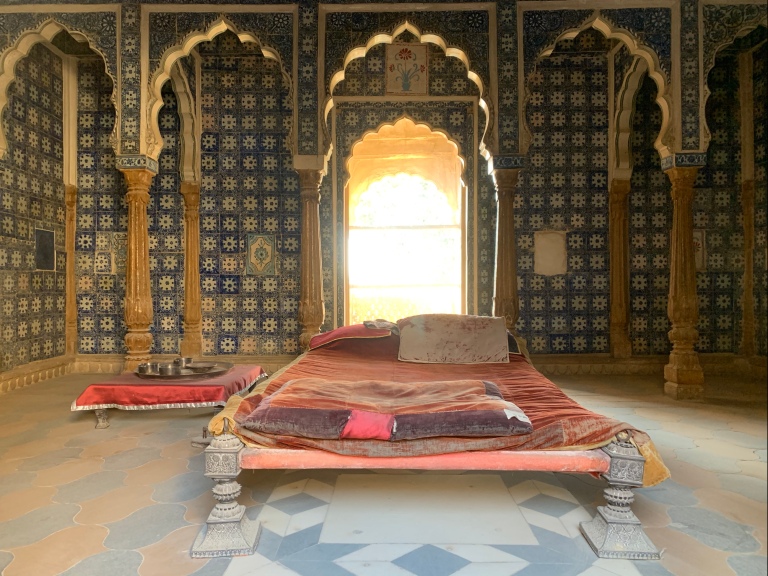 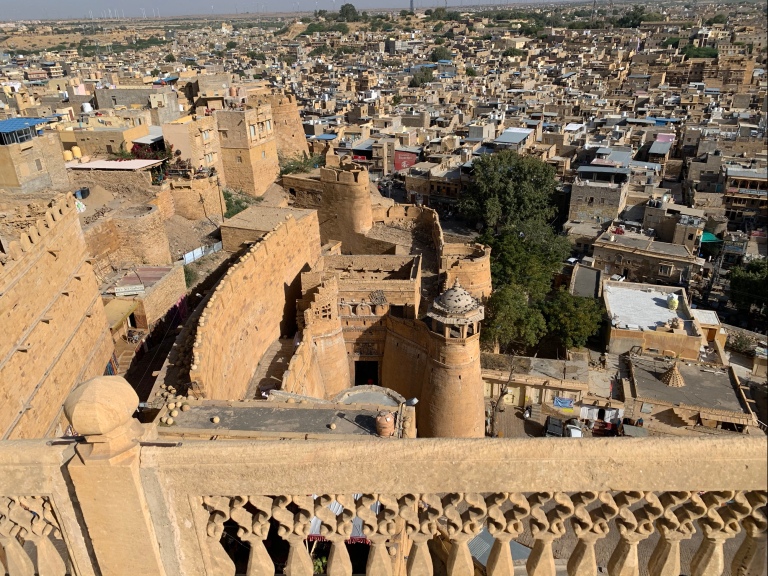 There is also major carving of the yellow sandstone in the Jain temples. Jainism is a religion for about 2% of the population but have acquired wealth through their banking and business. They built seven temples within the fort. 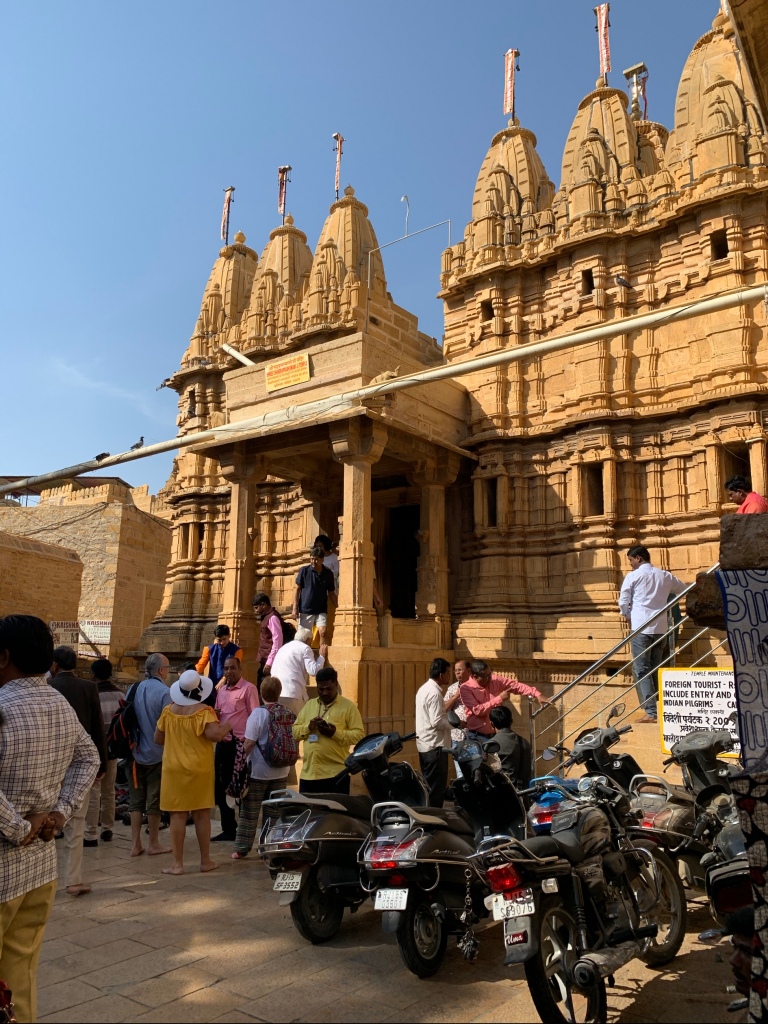 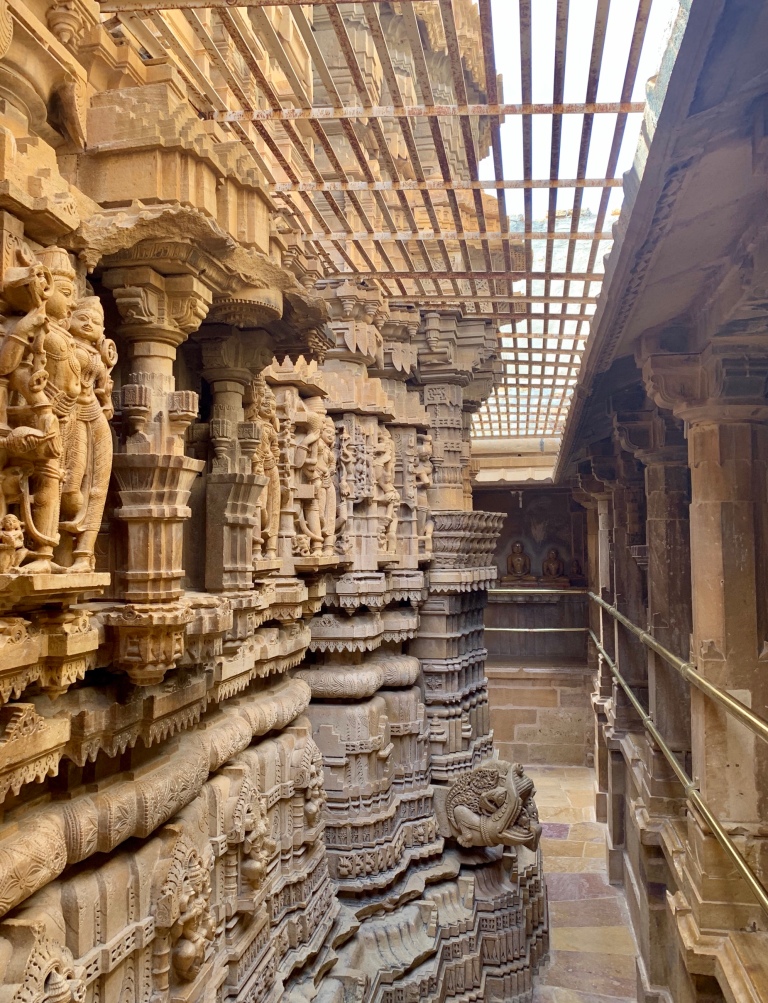 Five Jain brothers also built a huge family complex Patwa-ki-Haveli. The backside isn’t the most beautiful but you can see the scale. 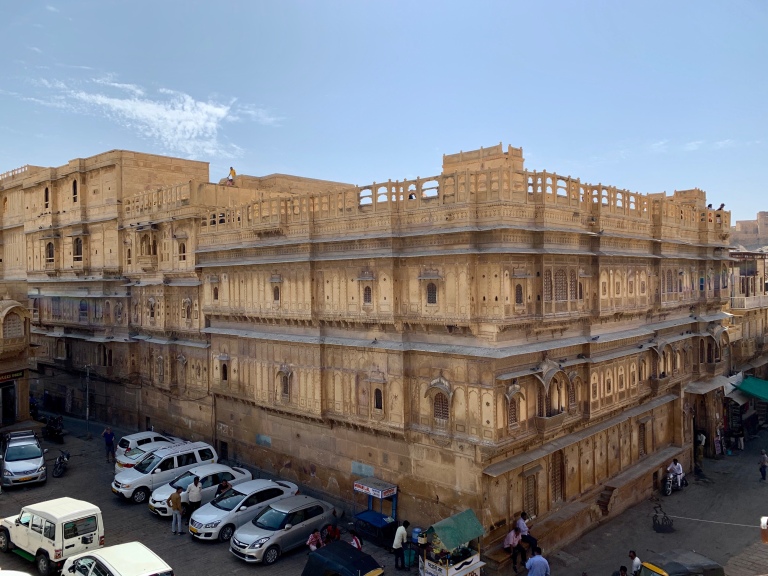 More buskers. This is a harmonium or pump organ. The accompanying singing is like a cross between serenading and melodic wailing…

And of course, turbans! The souvenir stand was doing a good business in the traditional colour of Jaisalmer.

I liked the t-shirts too! Especially ‘father & daughter’ pairs! 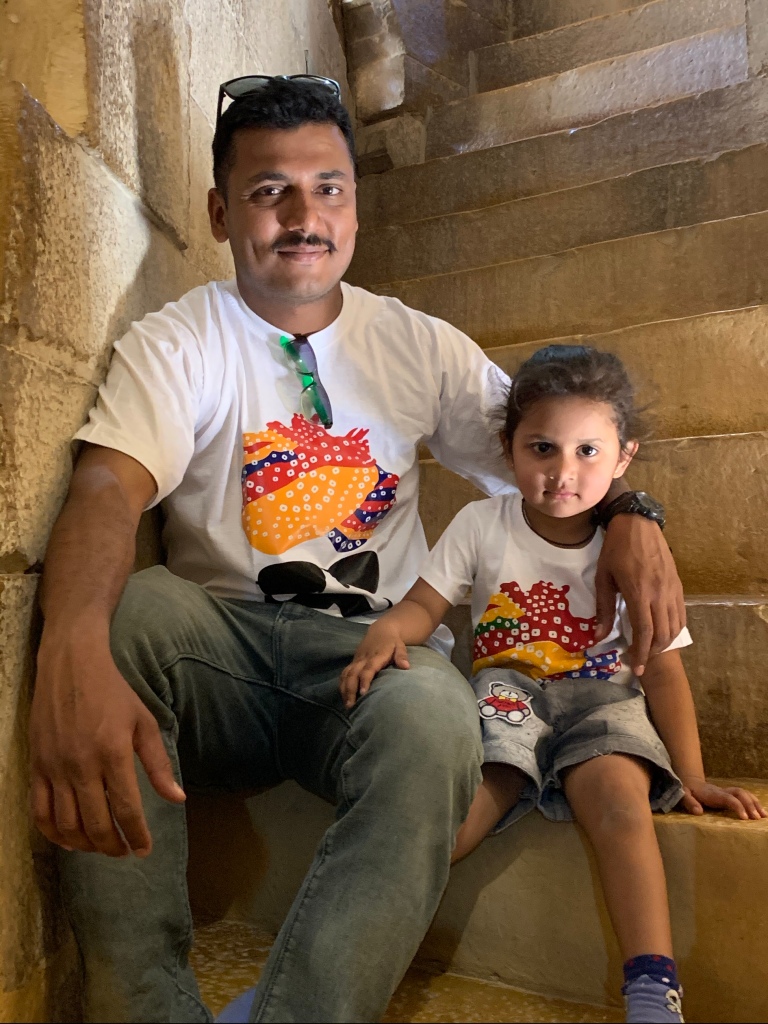 Food has the steady diet of curried veg and naan, but I threw in some Korean Bibimbab for a change.

Why have Nutella pancakes for breakfast when there is spicy stuffed paratha and curd (yogurt)!

For my last night in Jaisalmer I went on a camel safari. It was fun with a family from France as we travelled into the desert with a Jeep with our driver Nadu

We then met up with Sambu and the camels. 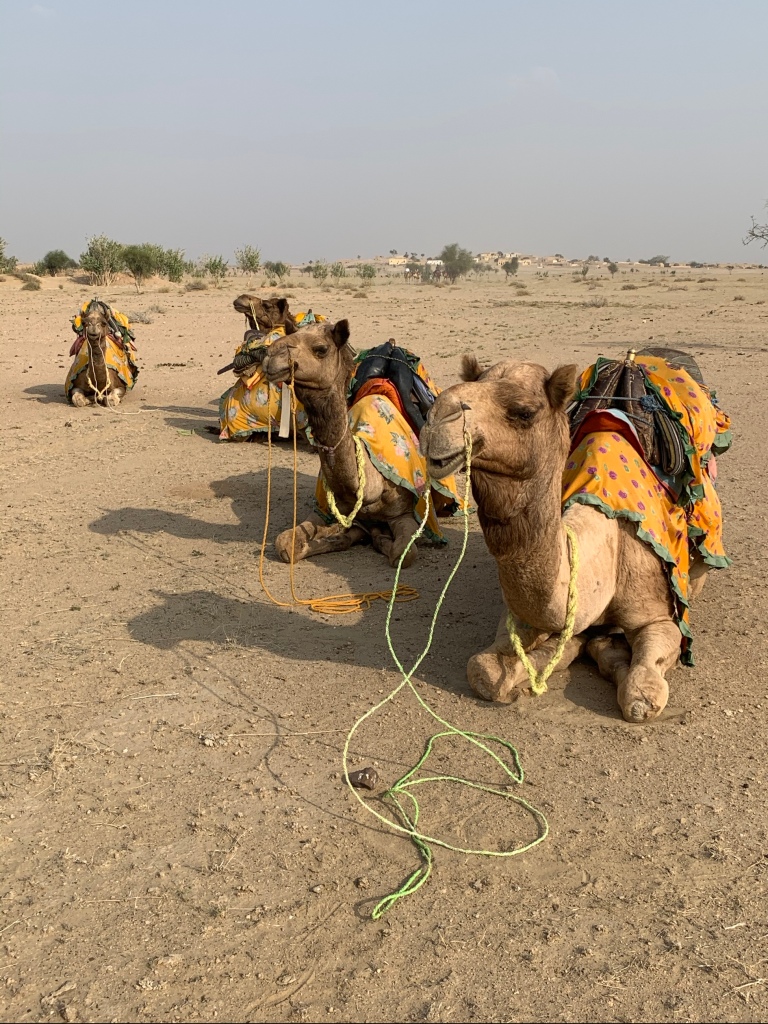 When we arrived at our private sand dune, Nadu had chai ready and dinner started. 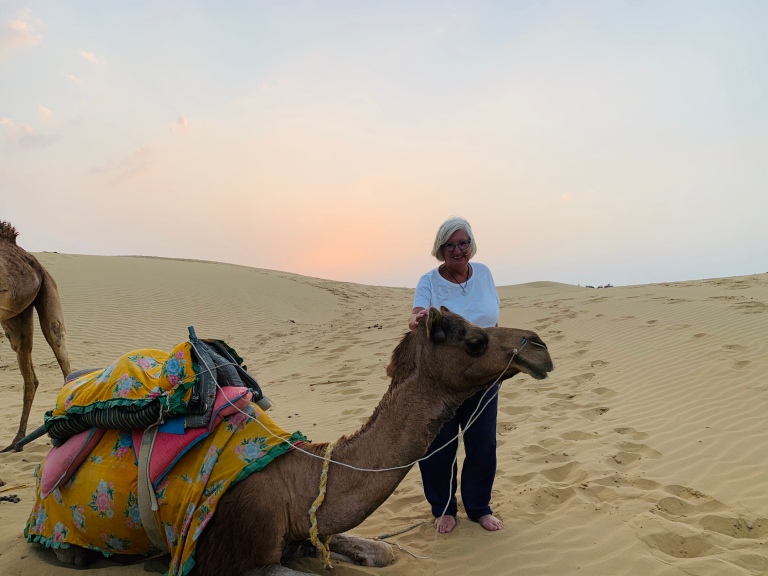 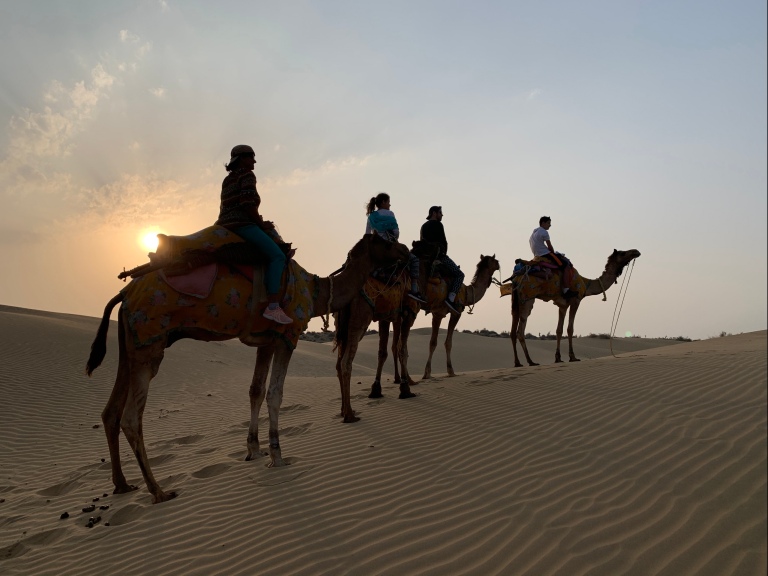 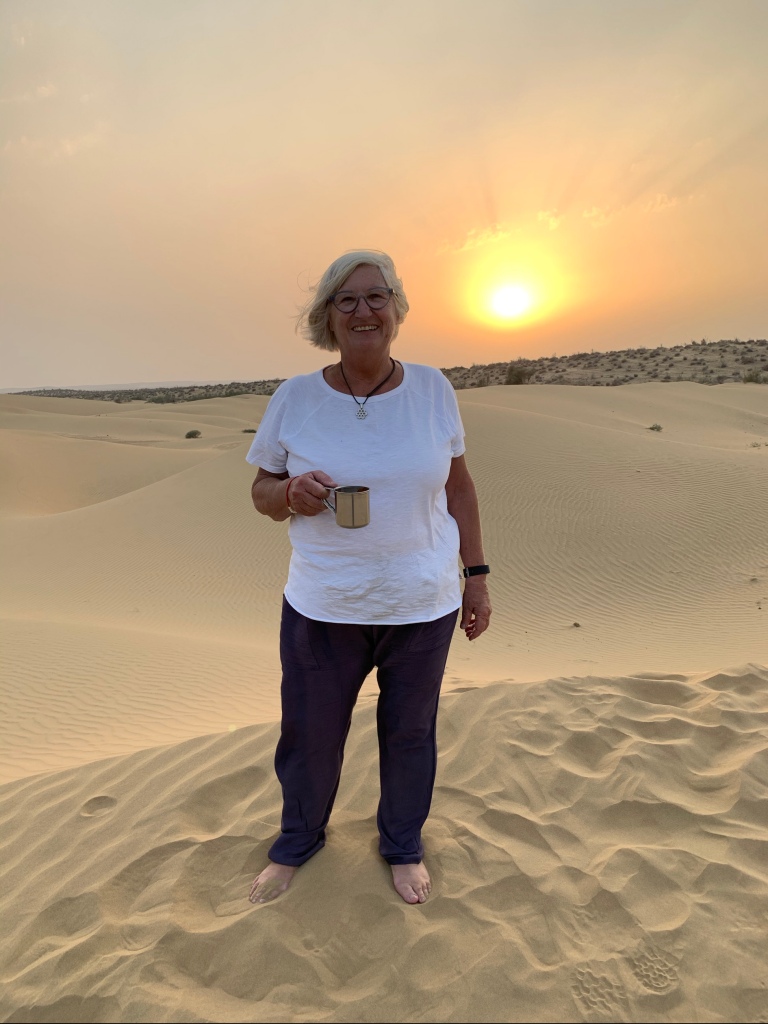 Finally, our cots were ready with a thick quilt. This is the ‘morning after’ as it was really dark at bedtime! It was a clear night full of stars! Amazing! 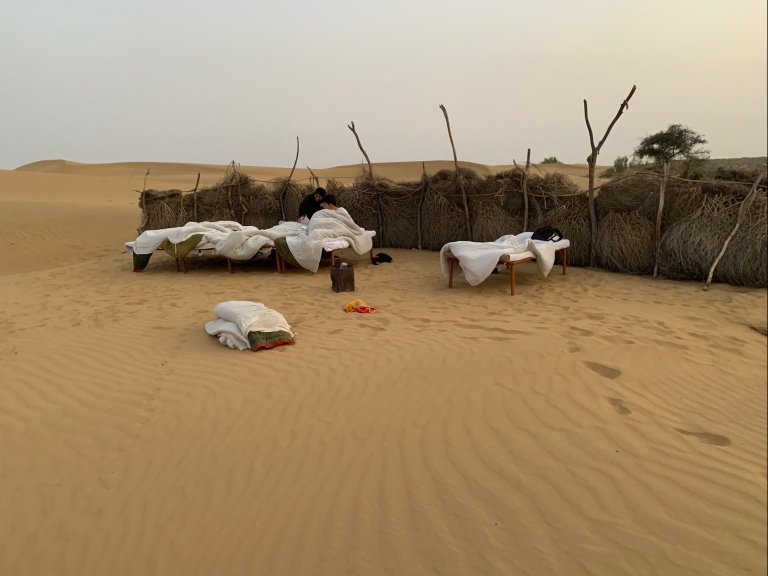 So then reversing the trip back to the hotel, a quick shower and to the airport for a flight to Jaipur.