I flew from Sri Lanka to Trivuvananthhapuram (anglicized to Trivandrum) so ended up in the south province of Kerala, India.

Kerala follows the lower left coast with beautiful beaches and abundant seafood! And coconut, as you will see later in the food photos!

My two days in Trivandrum were consumed by finding a functioning ATM and local SIM card. I’ve usually found these at the airport by Arrivals, but all I managed to do was exchange US$20 for some rupees for the taxi.

The SIM card, when I was finally ‘approved’, was only CA$11 for 84 days with tons of data and talk. So it was all worth while!

I also went to Napier House museum, but it was closed for Independence Day. The outside was beautiful. 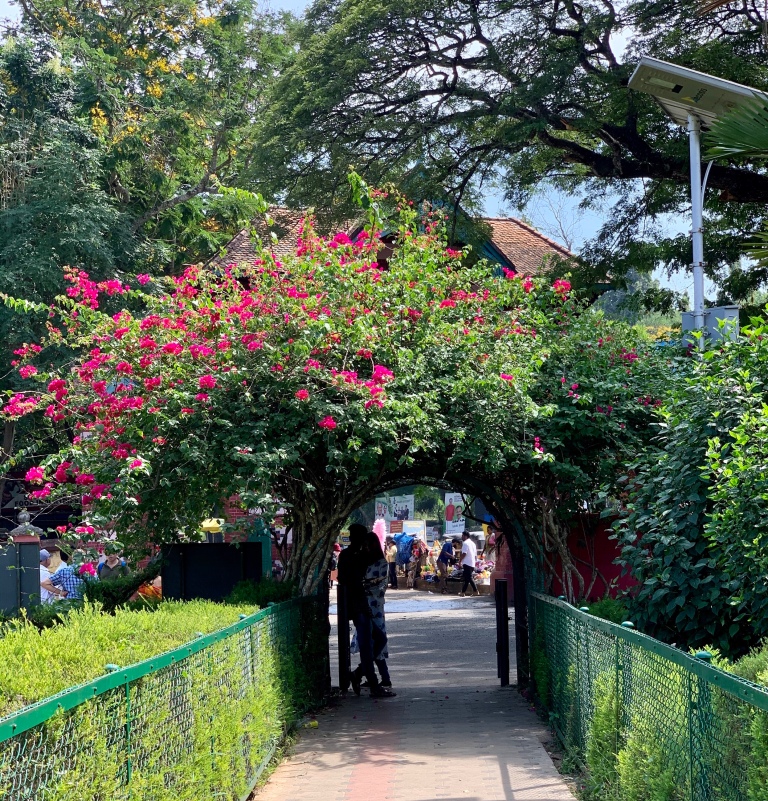 Beside the museum was a zoo which was cool and shady, and busy with families on a Sunday afternoon. 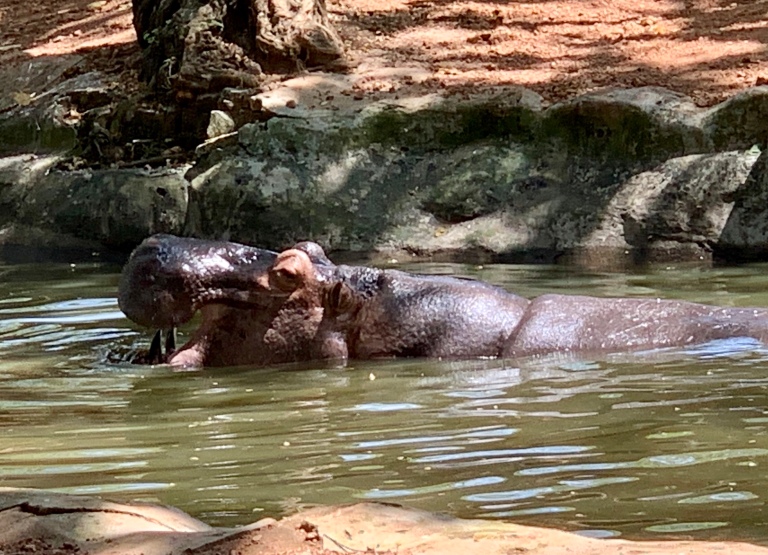 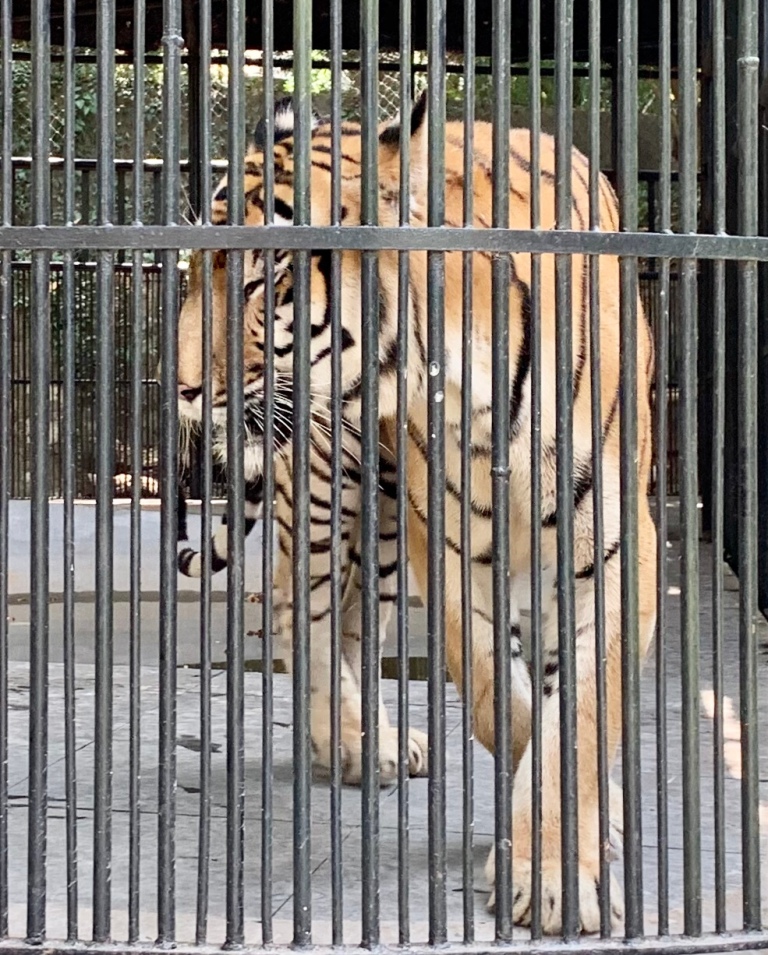 Then it was a 30 minute train ride north to Varkala. It was rather strange to be in ‘Sleeper’ class but the train was headed to Delhi – a 50.5 hour journey!

The back of seat behind the girl lifts up to create the third bunk. Porters were distributing blankets and little pillows. 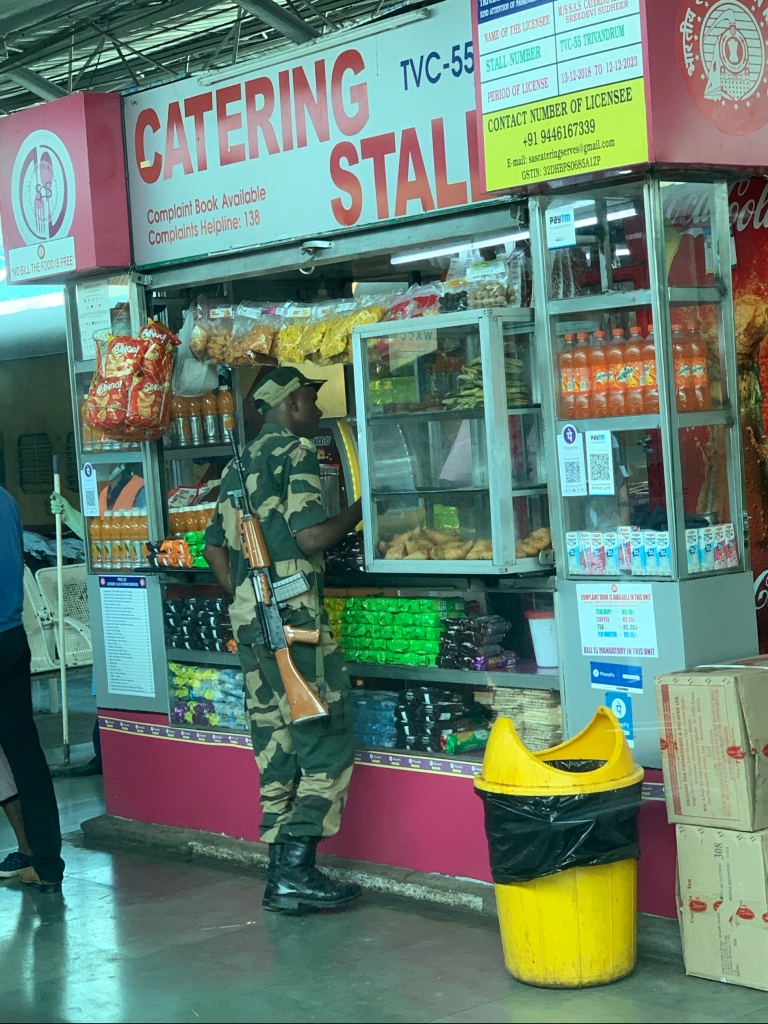 Varkala is a ‘beach town’. This is looking down from the South Cliff where my guesthouse was. Six minutes down, eight minutes up!

My rented lounge chair with the cliffs behind.

It was a perfect balance of quiet with enough tourists to keep a selection of beach restaurants in business.

The fishermen went out every evening at sunset. And the fresh fish was delicious! 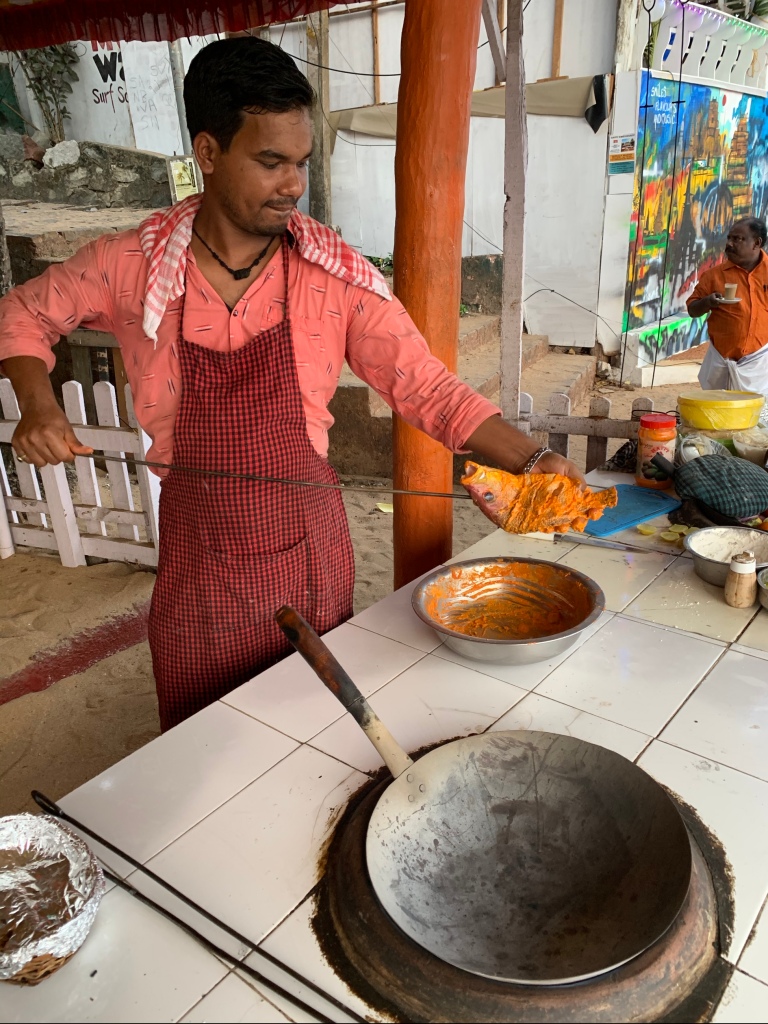 And lots of veg curries. One interesting one from Kerala was ‘Thoran’ made with grated vegetables sautéed with fresh grated coconut and crispy curry leaves. This version had carrots and green beans. 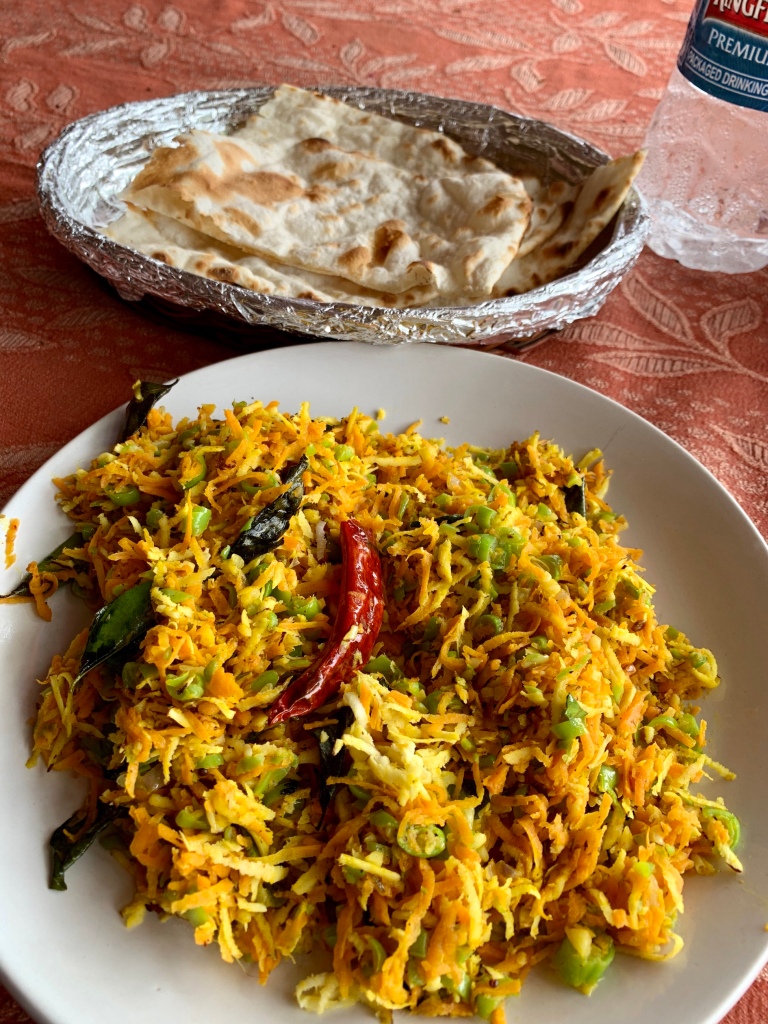 Alcohol is pretty well limited to a few tourist bars and hotels, but can sometimes be bought ‘discreetly’. My fav was the ‘teapot’ beer 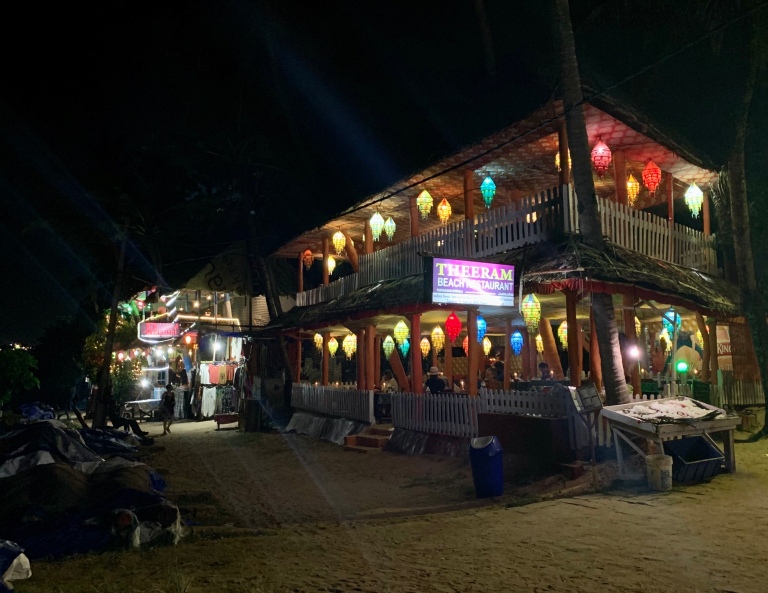 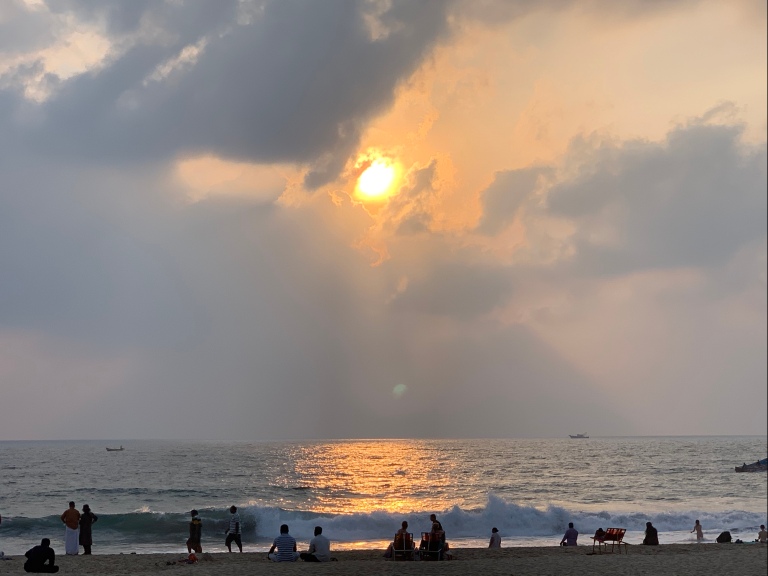 I had two great beach days but also took a walk into the town, in search of an ATM😏

Bought fresh roasted cashews and raisins for my snack bag! 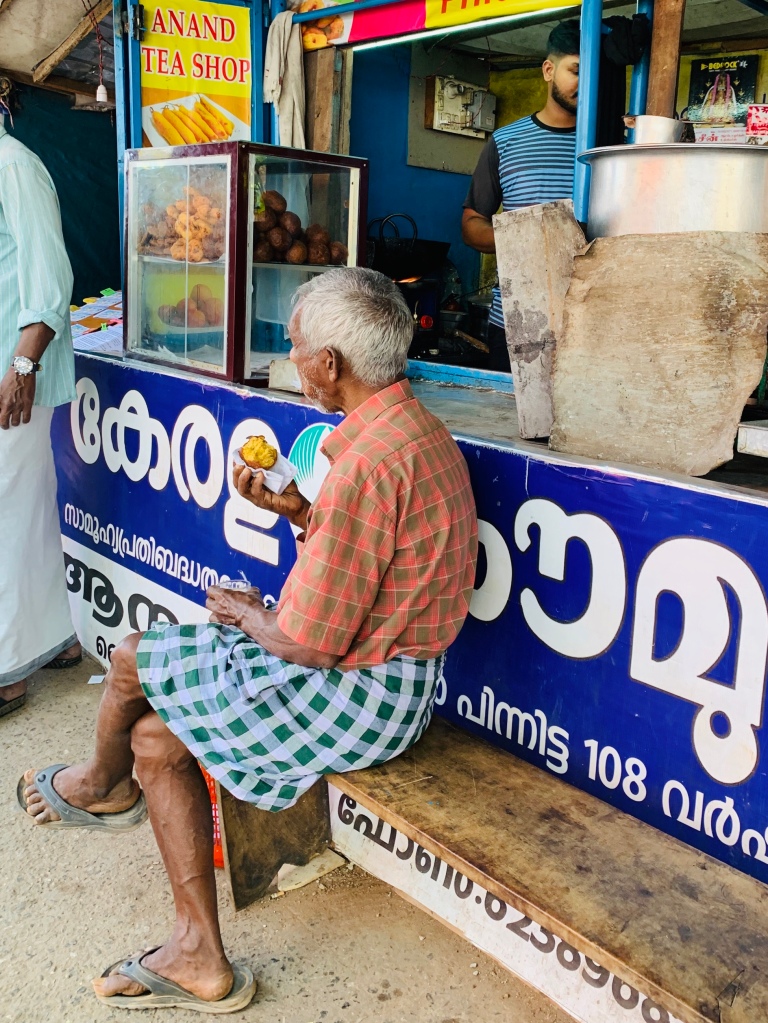 Then it was an hour taxi to Kollam where I took a ferry to Alappuzha (Alleppy). It was an eight hour ‘tourist’ boat through the backwaters paralleling the coast. It was a combination of lakes and canals. 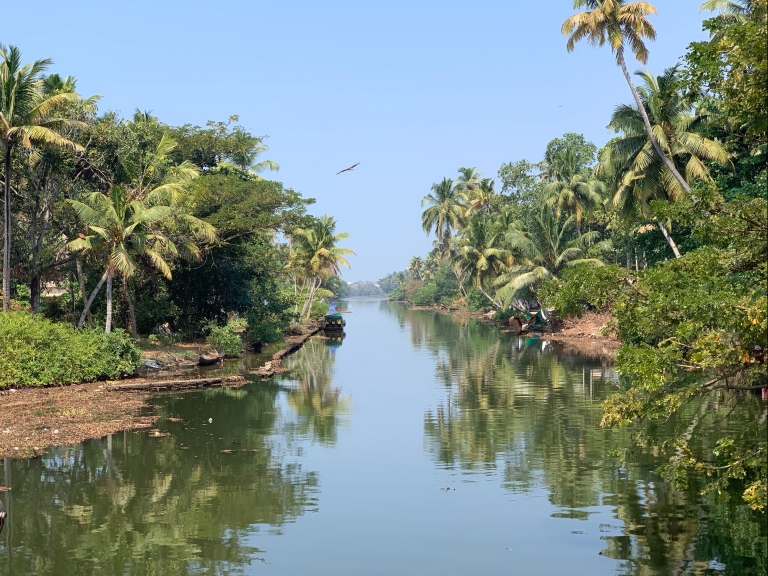 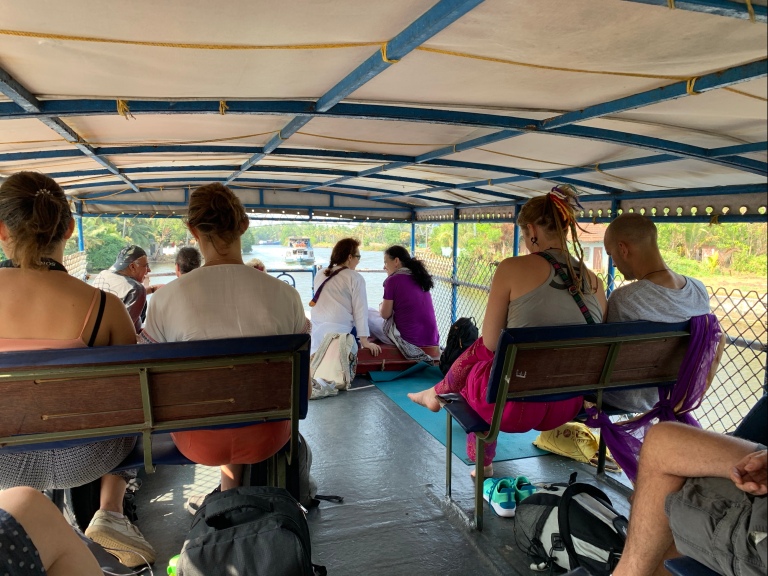 We stopped for lunch

And ‘tea time’ with fresh from the fryer banana and apple fritters! There is only one boat a day from each direction so they can time it perfectly! And only 10 rupees ($0.20 CDN each.

We also saw many houseboats that people rent for one or more nights. 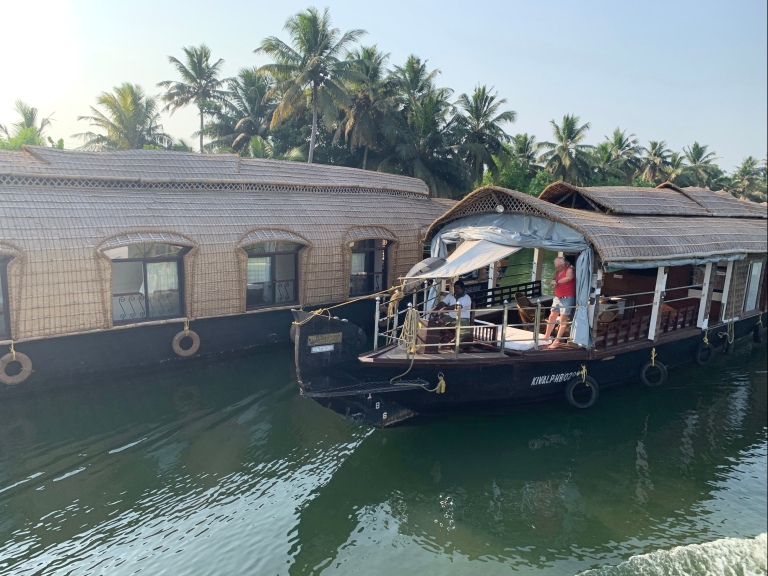 I met an interesting woman, Sirkku, from Finland on my boat trip, and we walked around Alleppy the next day.

Old pier, lifeguards on their phones… 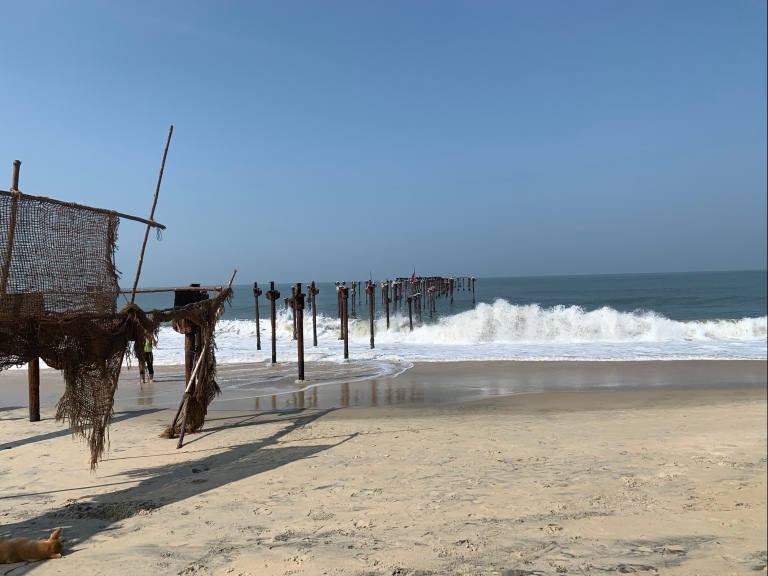 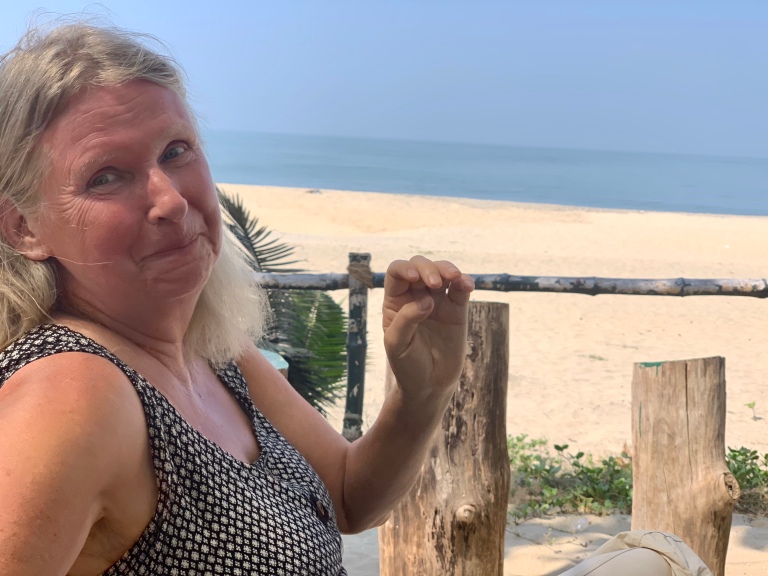 Then I booked a night in an old colonial hotel and took a ‘vacation’ day by the pool. 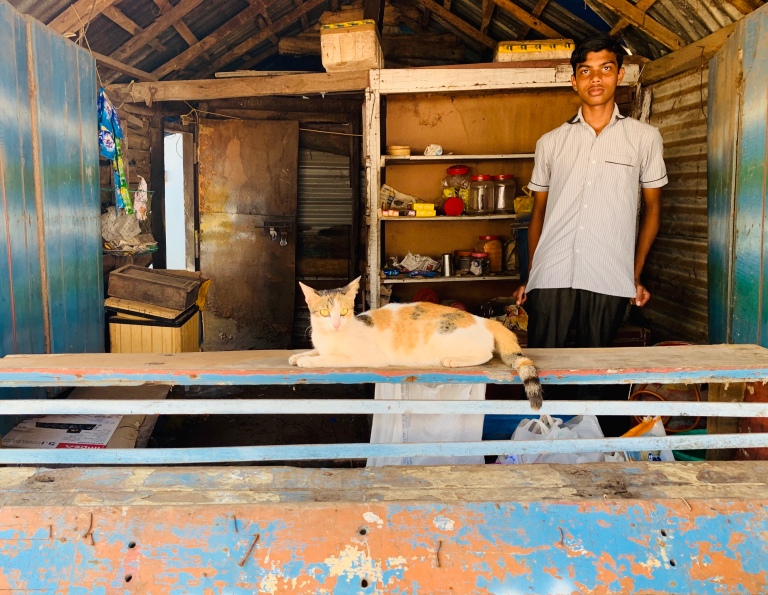 Next was Kochi (Cochin). It’s an island off of the city of Ernakulum. Fort Kochi and Mattancherry are the main areas of tourist interest with Dutch, Portuguese and Jewish history.

I was surprised at the strong Catholic presence here. I’ve seen so many churches here (many very large) that I felt I was around Rome!

Santa Cruz Basilica in Fort Kochi is from 1505

There are many tourists, and many shops, and many ‘auto’ drivers. (In India, tuk tuks are known as ‘auto-rickshaws’ but that is shortened to ‘auto’)

The problem is that shops will give the auto drivers rice, petrol or whatever, if they can get you in their shops. They are always asking for a ‘favour’. It’s hard to be ‘hard’.

Chinese fishing nets need a whole crew to launch them. 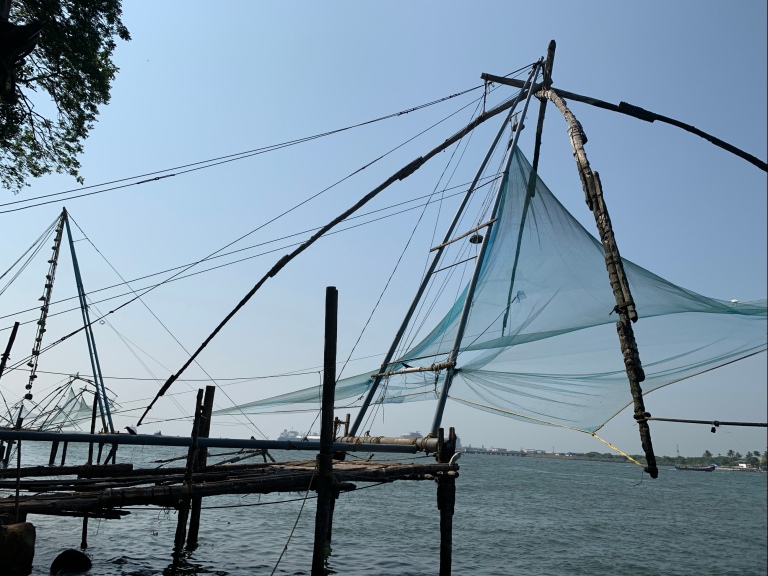 Tata, of India, makes a little car that isn’t much bigger than an auto 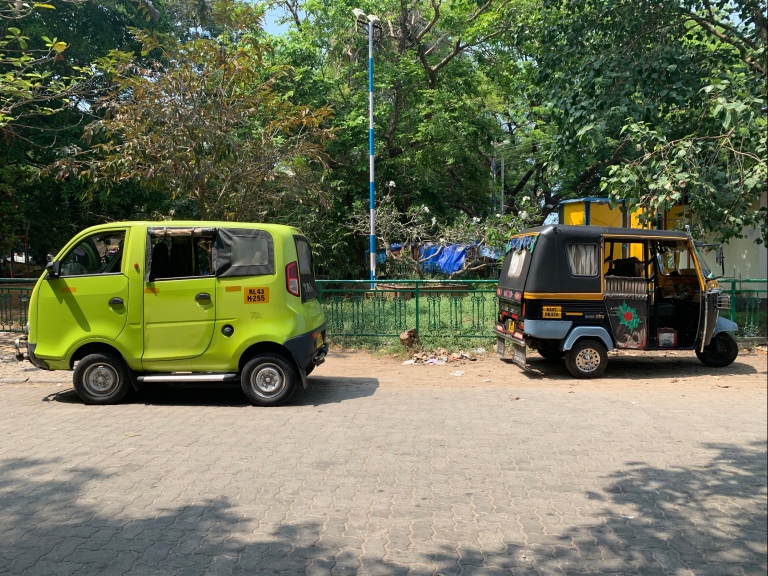 Promenade around the water 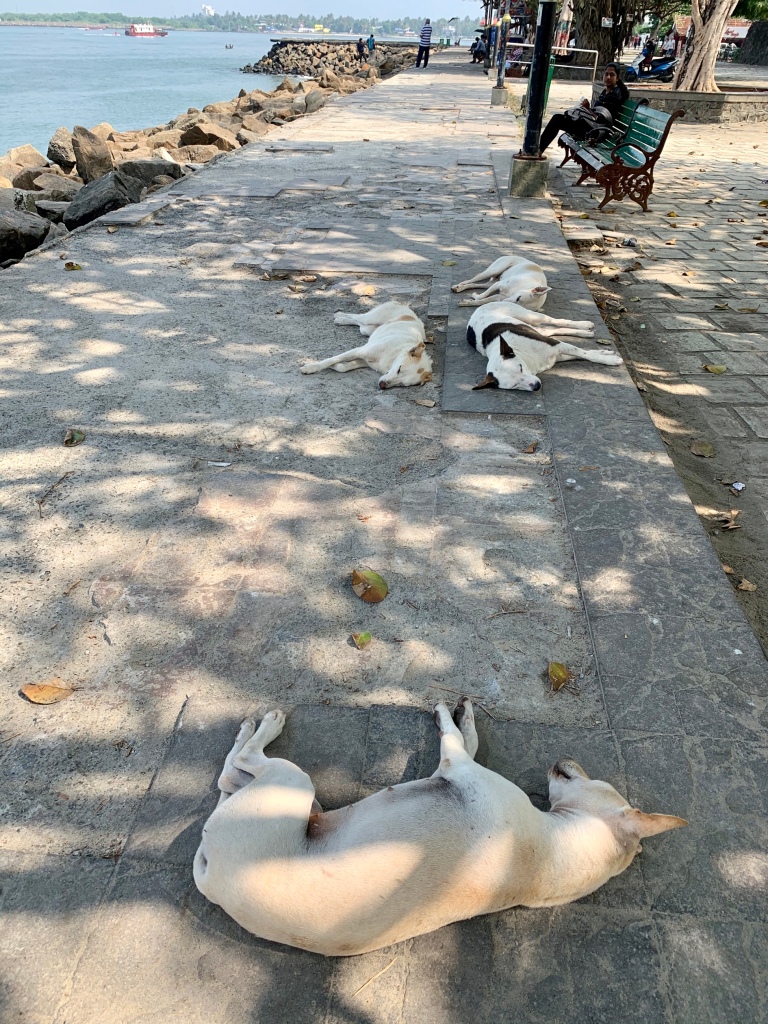 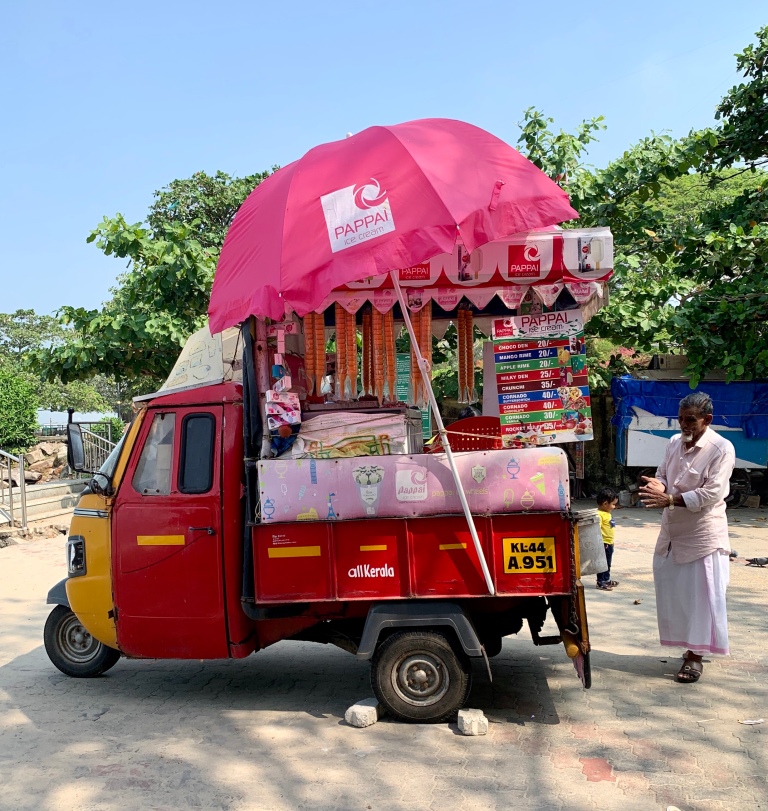 Litter is an issue here, like many countries, but I could see public campaigns promoting change. Having a garbage can, and then garbage pickup and recycling, all takes tax-payer rupees. Travel makes you very aware of what you may take for granted. 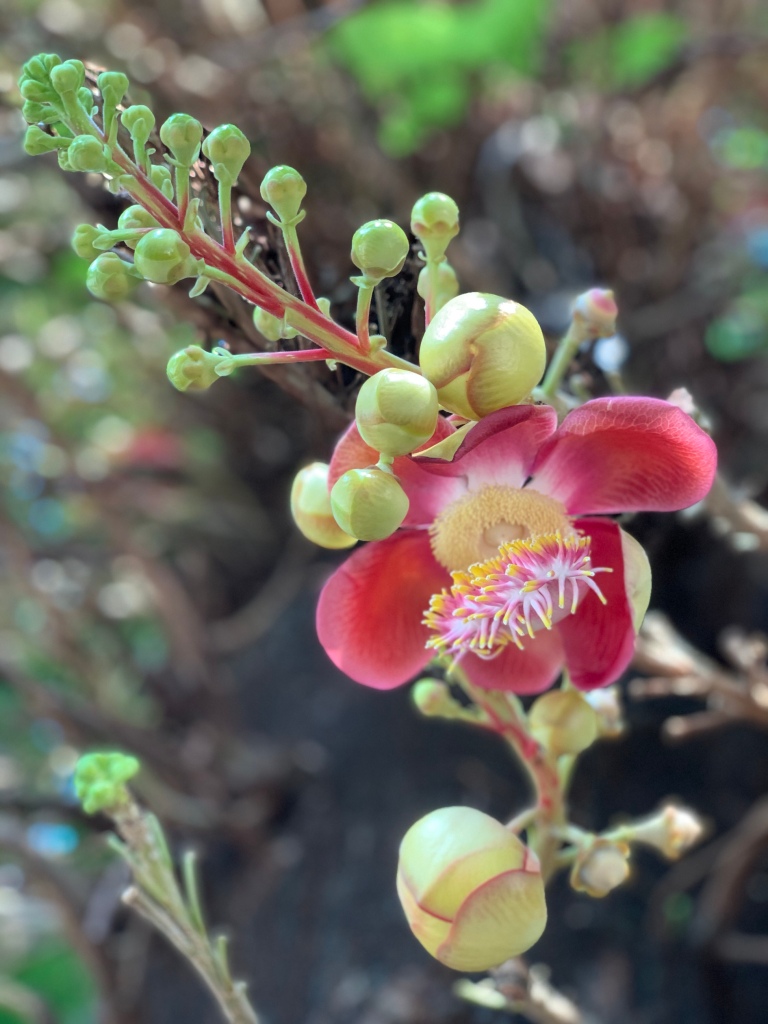 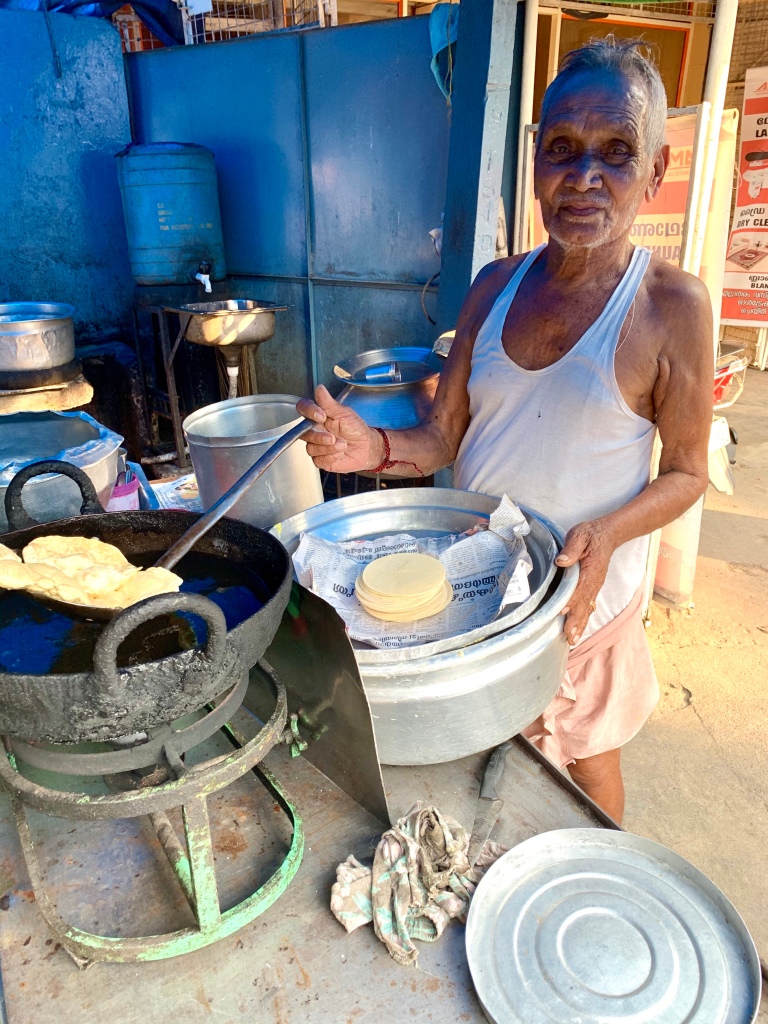 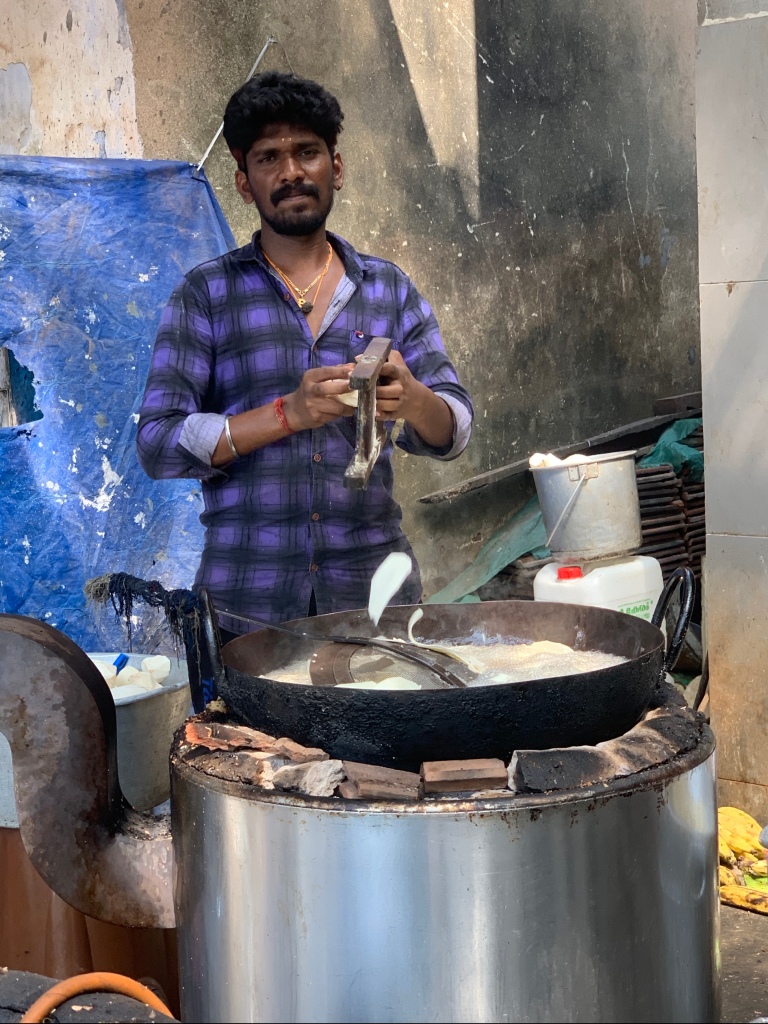 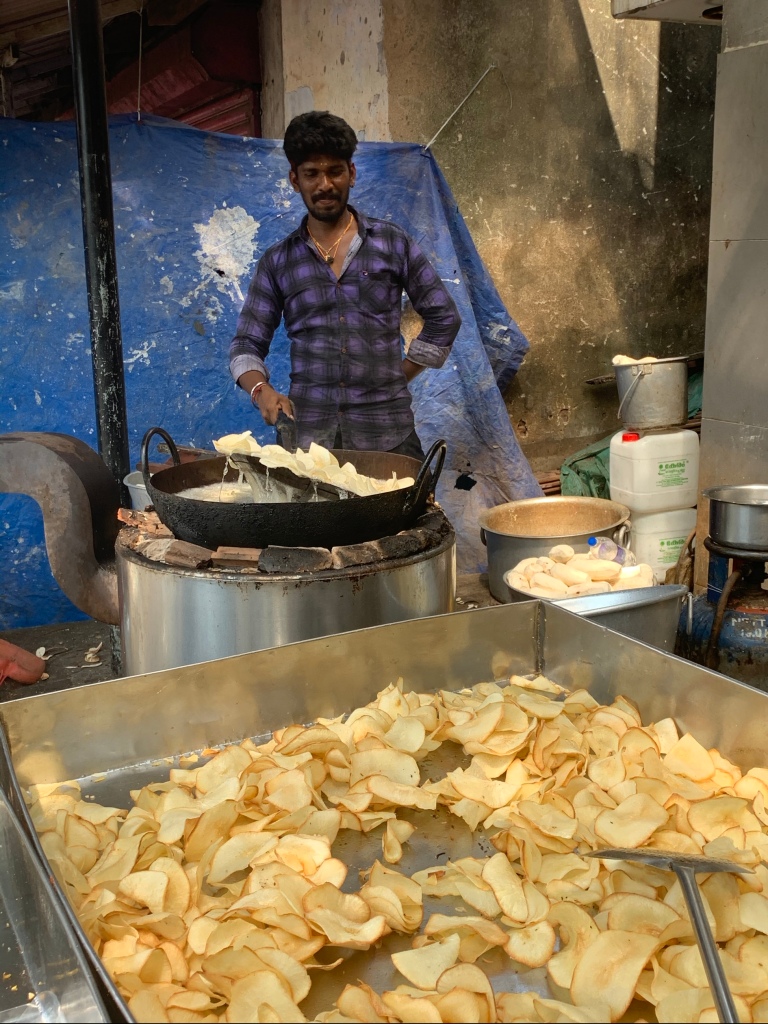 Day trip to Cherai Beach by ferry and bus, home by auto 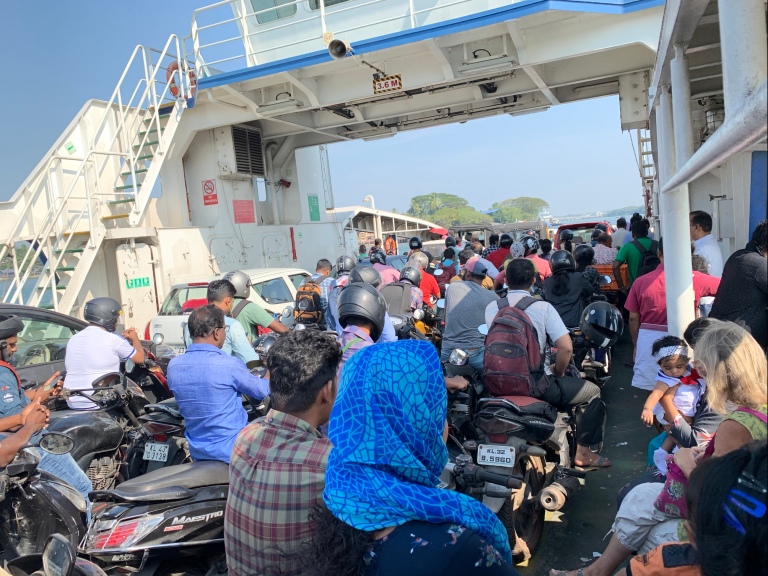 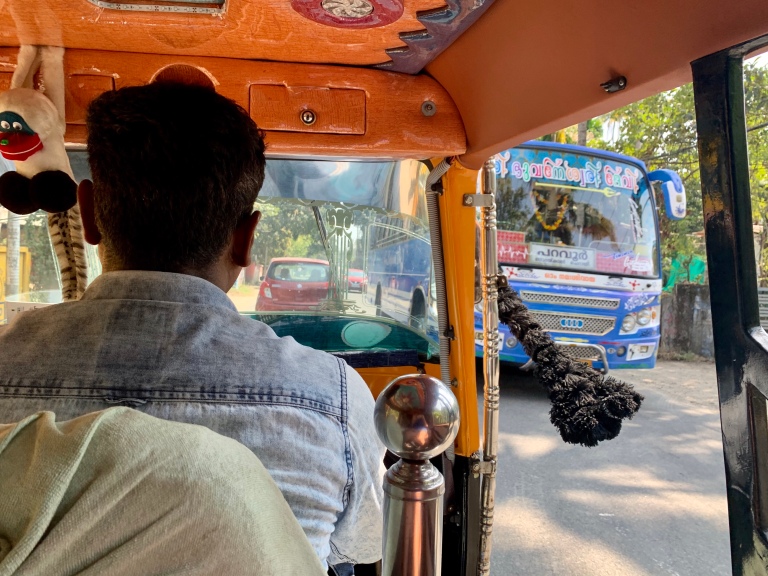 And of course, lots of good food.

This combo meal of curried fish, prawns and veg with rice and chapati was enough for two meals with my hot-weather appetite, but it was nice to have a mix for a change. It was still only 400 rupees ($7.50 CDN) and there was a generous piece of fish under that sauce.

I have another day in Kochi but am going to take advantage of the good wifi today and post early.

Sunday I’m headed out on the overnight bus to Mysuru (Mysore). Its supposed to be a ‘nice’ bus with aircon, semi reclining seats and is faster than the train. I’ll let you know how that pans out!