The fall of communism in Western Europe began in Gdańsk in 1970. Strikes were prompted by food shortages and price hikes imposed by the communist government. The army responded with a massacre.

Things simmered but in 1980 the shipyard workers formed a new union called Solidarity. With their leader Lech Wałęsa, it expanded into a series of strikes that lasted over 16 months. They gained international support but then marital law was imposed.

My favourite example of resistance was of the Polish people going for walks when the government propaganda television replaced regular programming.

The memorial towers for 1970 are beside the European Solidarity Centre, a fantastic new museum. 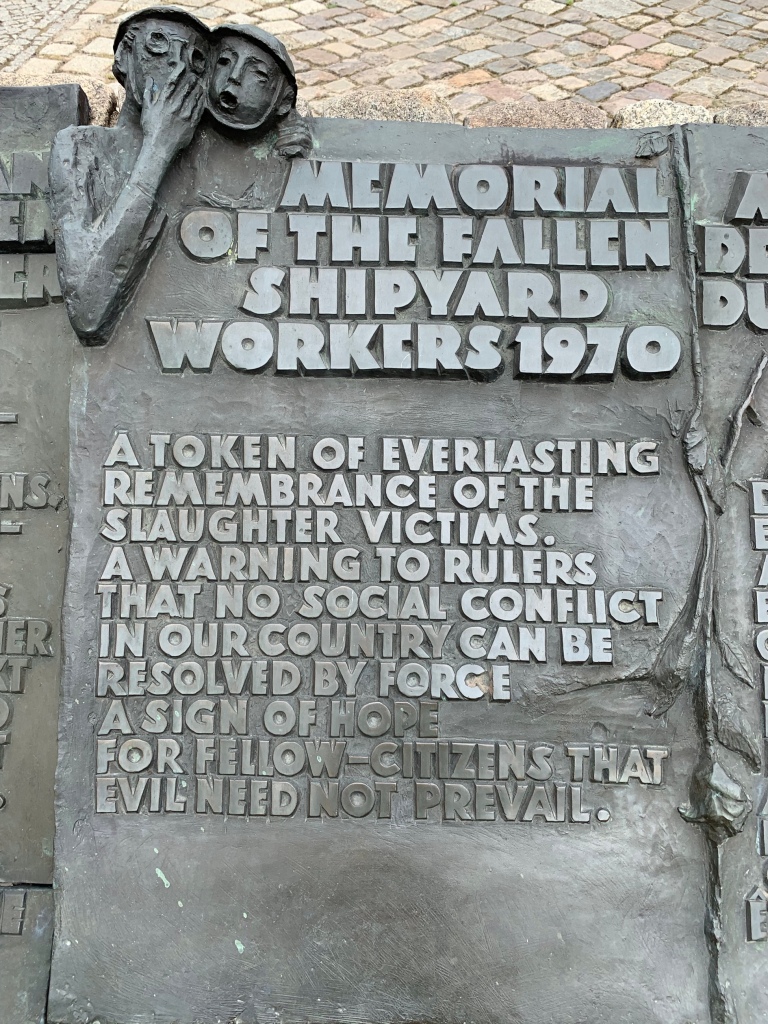 The rusted steel and ‘hull’ design is intentional.

Gates from the shipyard. 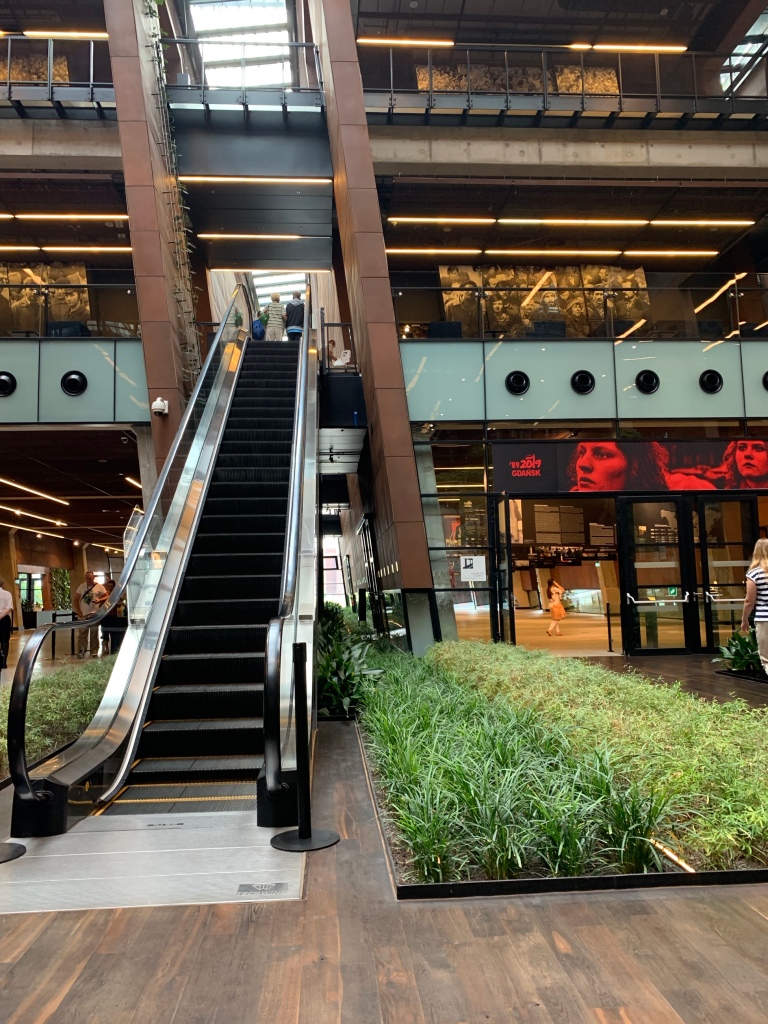 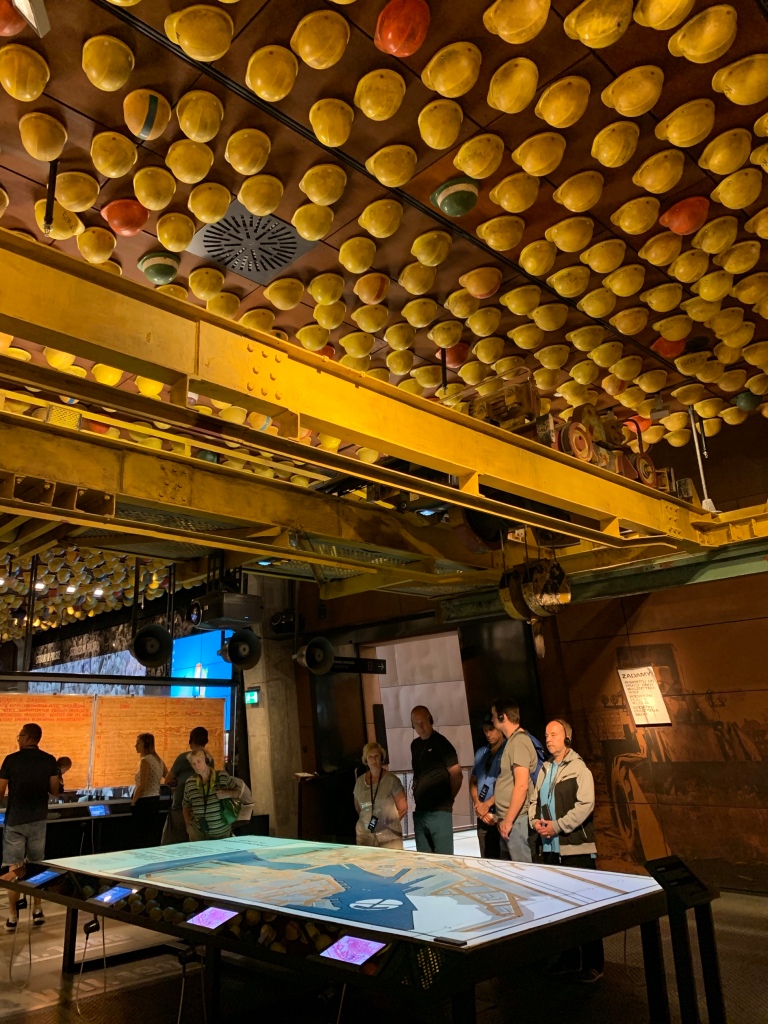 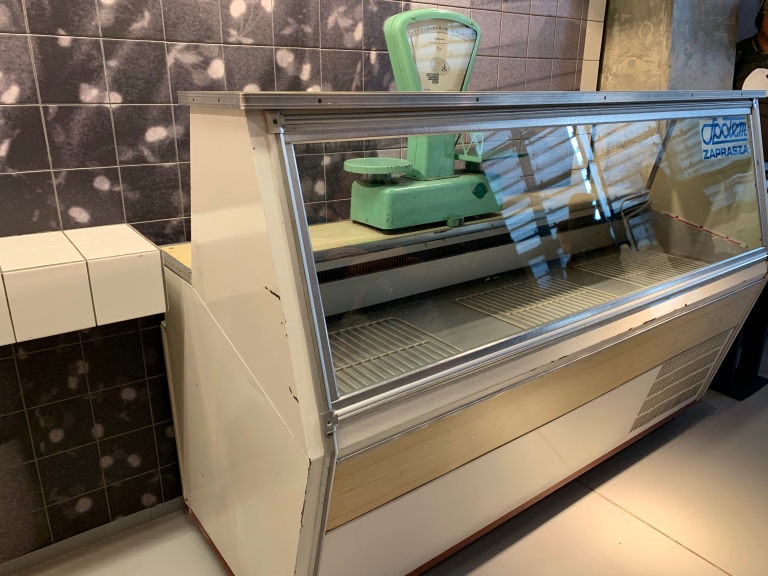 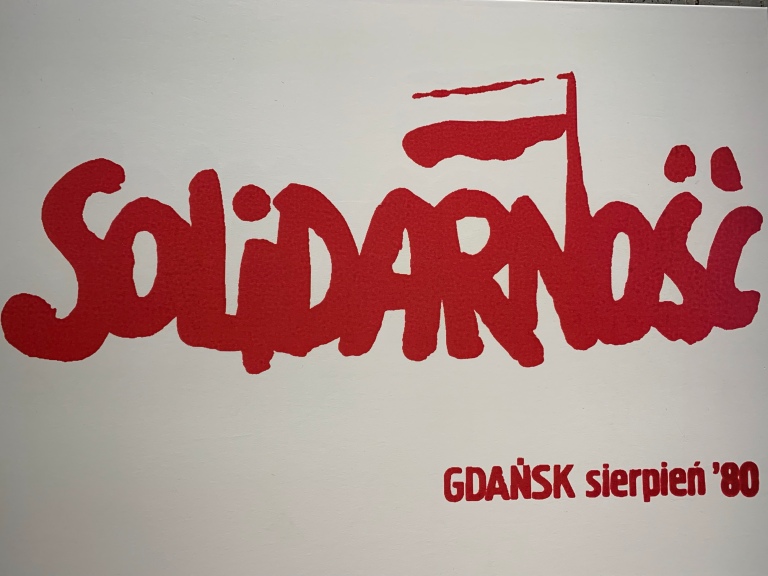 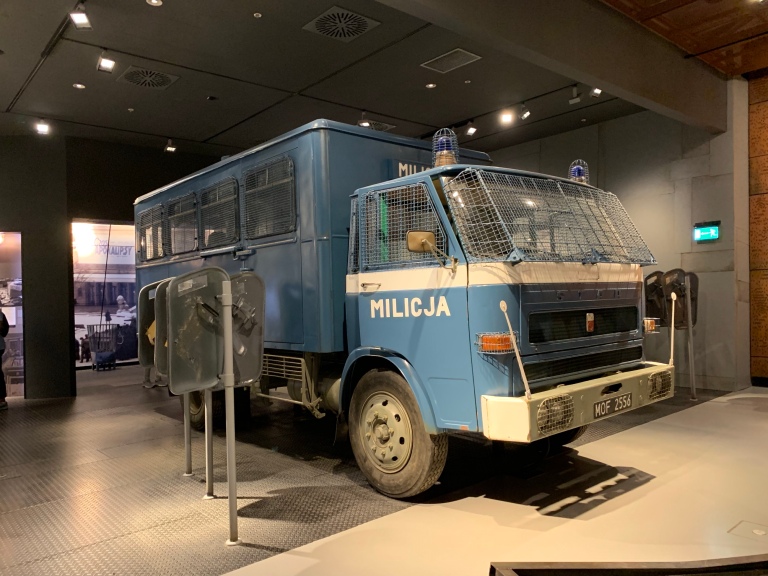 Yes, another museum outlining the brutal destruction of the Nazis/Communists who stopped at nothing for power…

But with Trump playing footsy with Putin (and admiring Kim Jong Un in North Korea), along with the rise of the right wing in Europe, it makes me worry about the future of democracy. Men drunk on power….

But Gdańsk has a long history of surviving. In it’s 1022 years, it’s had many rulers. But it has always been a welcoming trading port, and known for its multicultural diversity.

The trading wealth is evident in the buildings, though most have been rebuilt after 1945. 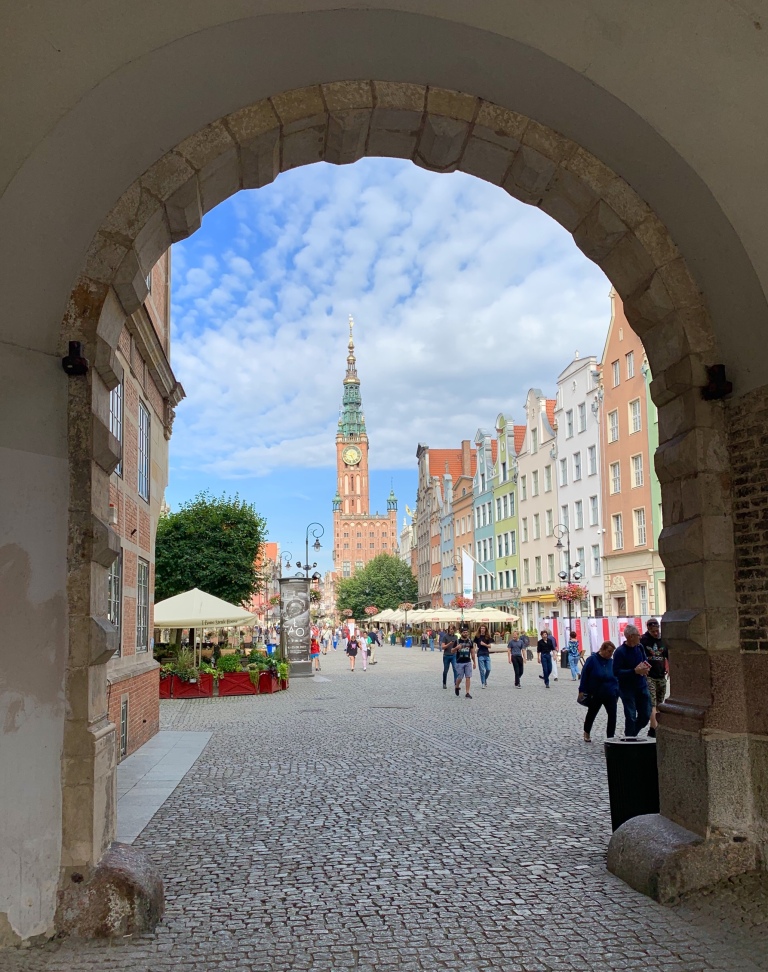 The houses on the canals are like Amsterdam, skinny and deep because they were taxed on width.

Grain awaiting shipment was stored in granaries. Many were destroyed in 1945 but some have been renovated. My apartment is just out of the Old Town on Granary Island, and construction is fast and furious. 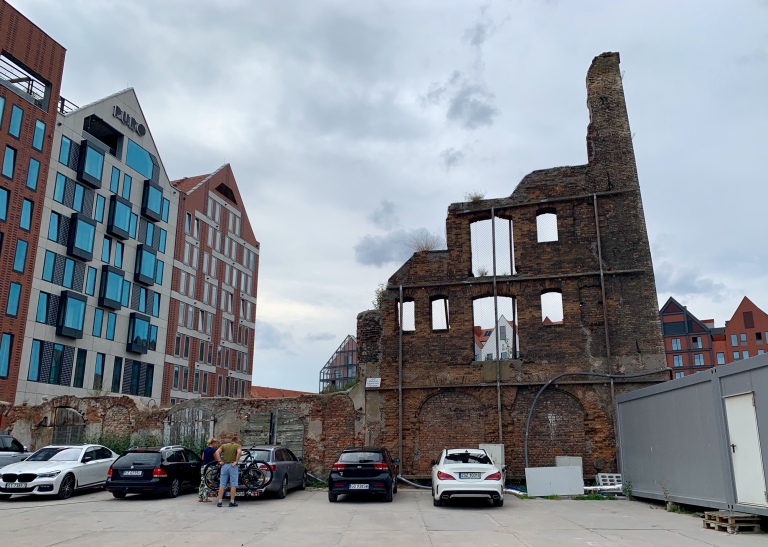 The Crane is really a 15th century crane! It was driven by human power with a clever mechanism using treadmill cages. It could lift two tones up to 27 metres. 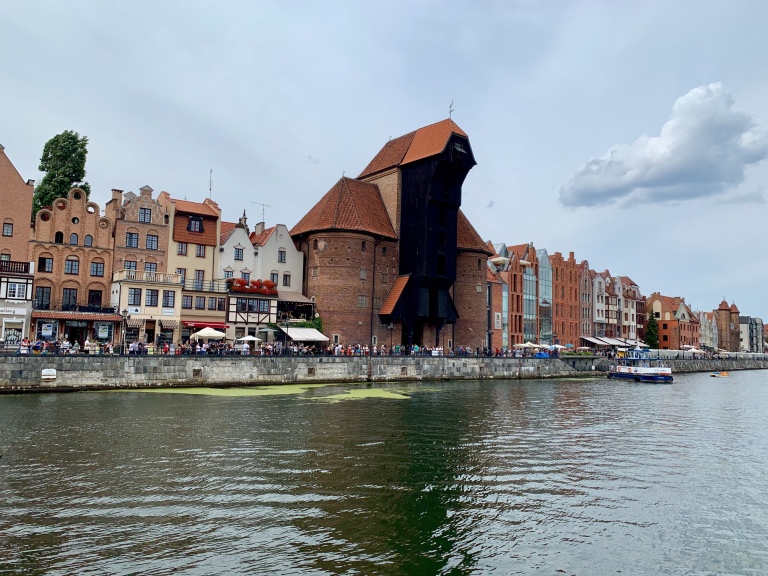 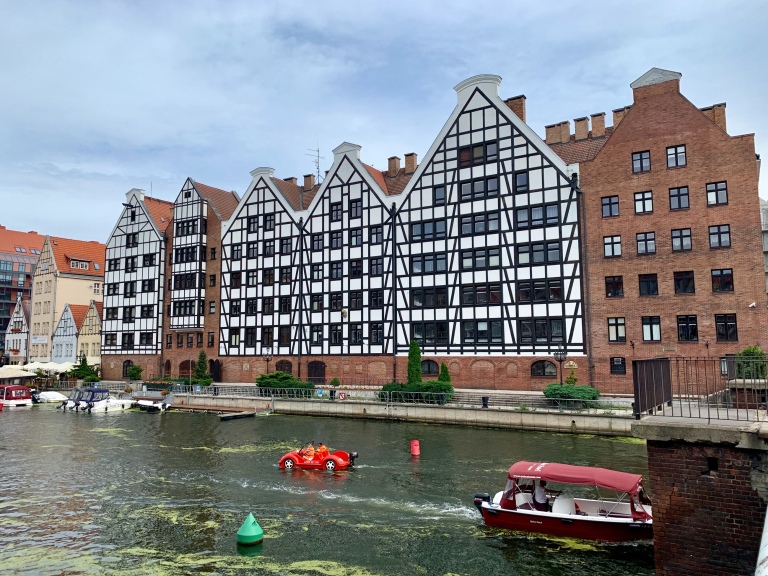 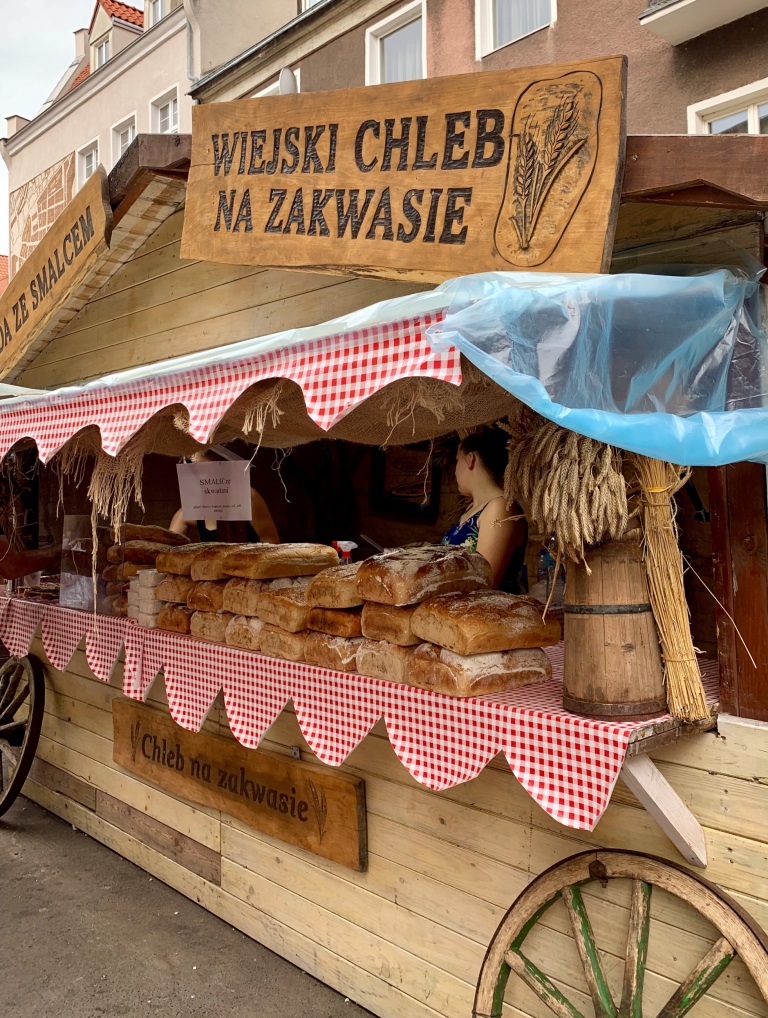 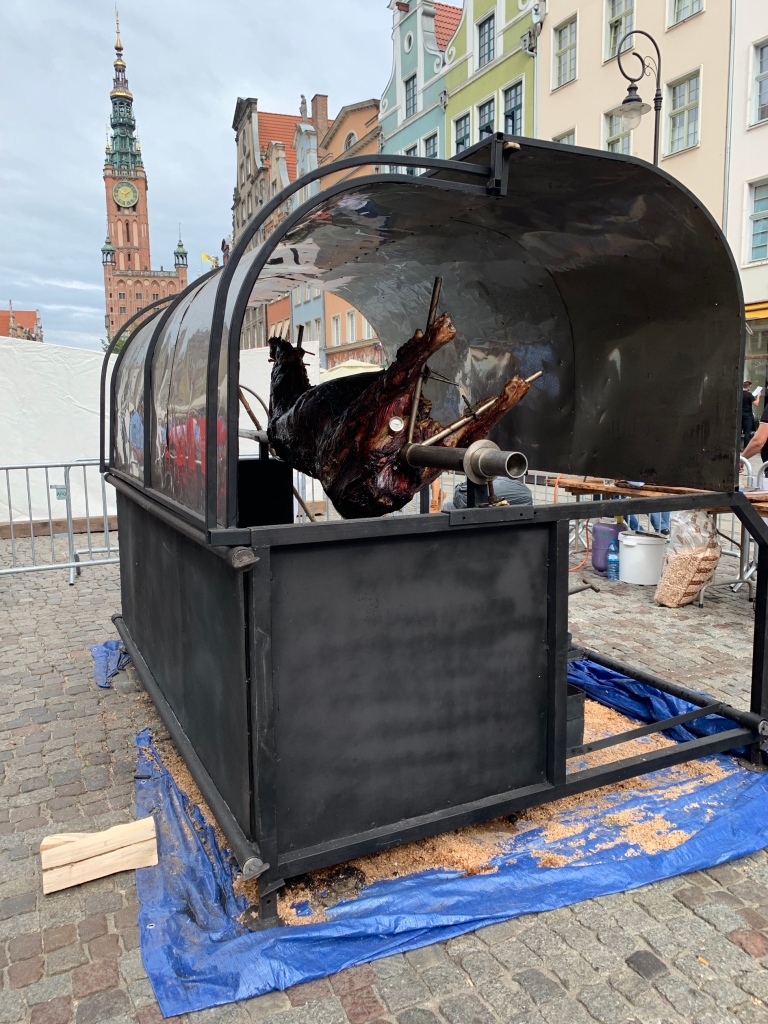 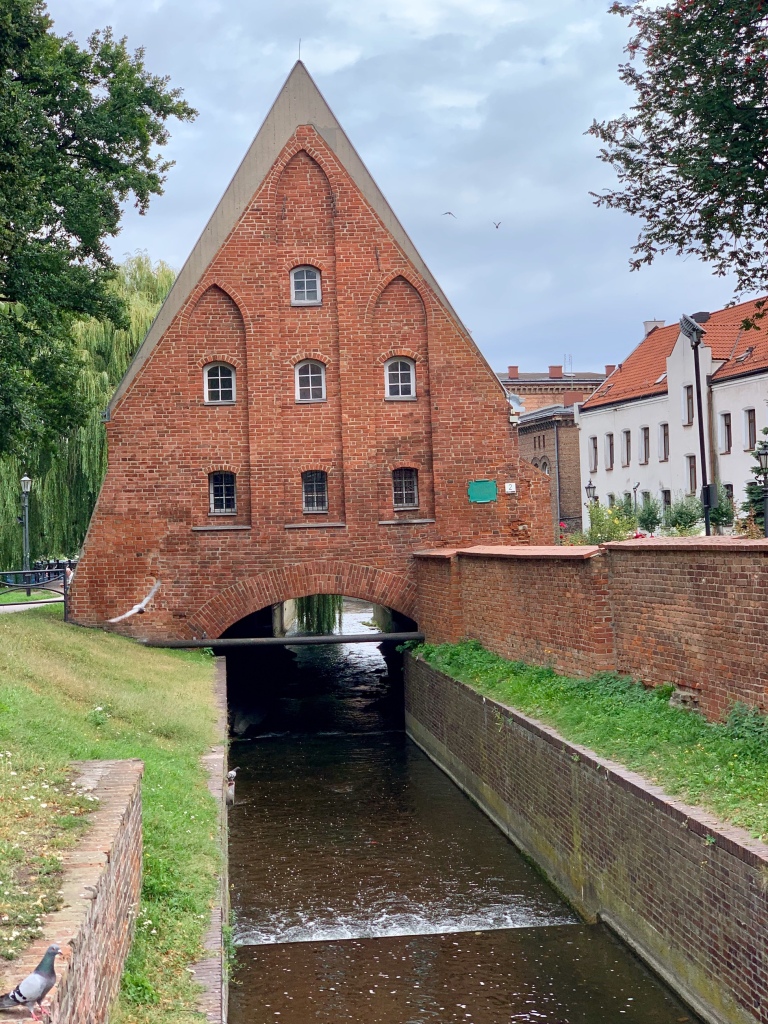 The coastal town of Sopot was only a 20 minute train ride, but first I had to find the station! It wasn’t the main station, and thankfully I had help as I would have never found the stairs down in the middle of an overpass!

The Molo, or pier, is 500 meters long. Nice sand but water looked a little weedy. Town is known for being ‘ritzy’, but all I felt was ‘crowded’. 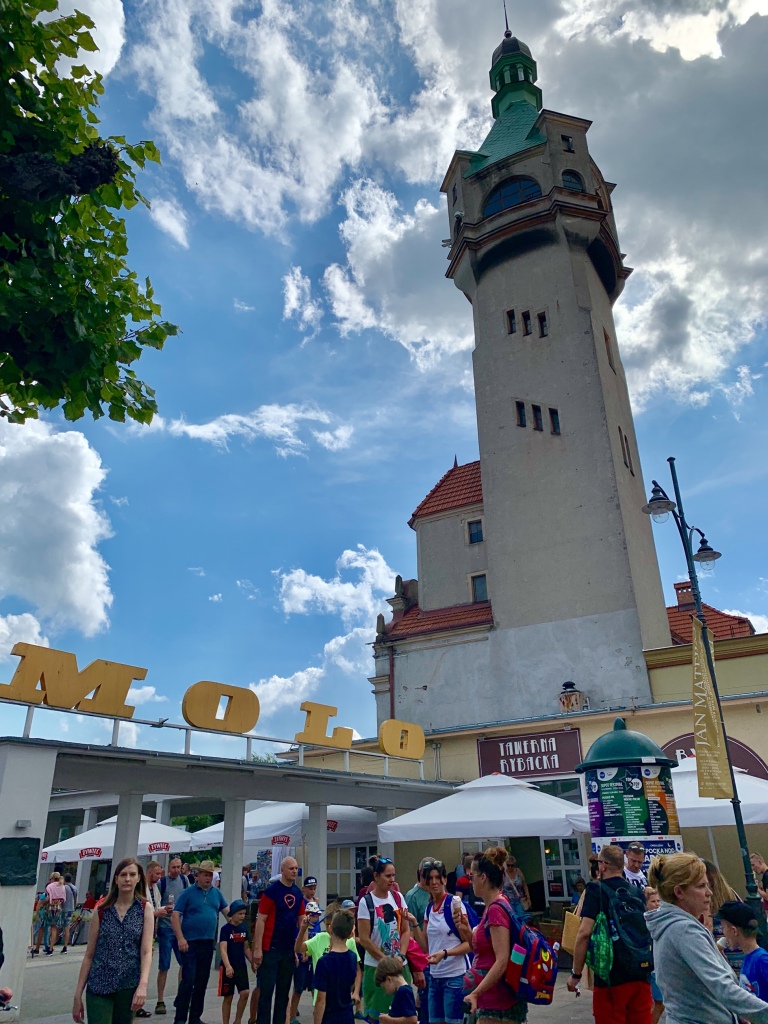 And food! I found a lovely little restaurant which does the ‘Local’ thing. Their Vege Breakfast was a wonderful mix of flavours and textures, and only $10. 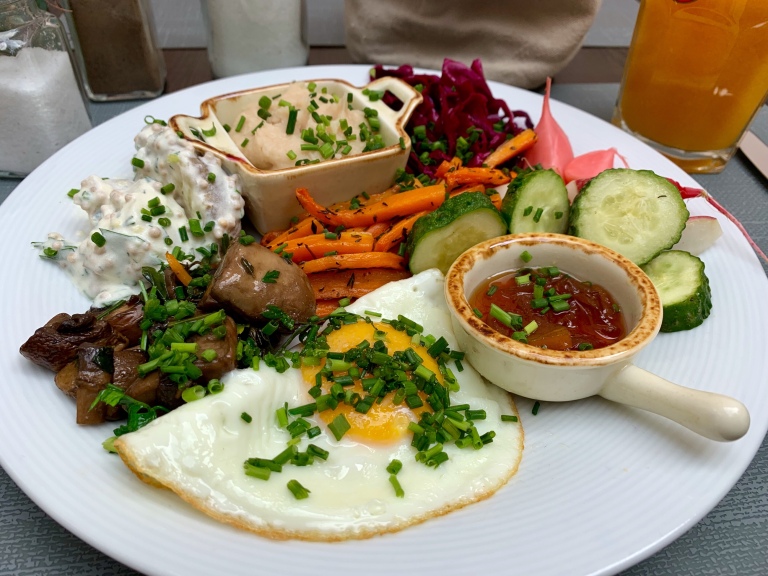 Being a coast town, fish is always a good choice. I had a generous piece of halibut

The nice part of having an apartment is the ability to do some cooking. My favourite breakfast just needs a fridge, but it nice to have real dishes.

One more night in Poland. It was a great time, and I’m happy with the three cities I chose. Though all the s, c, and z’s are still overwhelmingly!

I have a morning flight to Denmark where I’ll stay with friends for a few days. 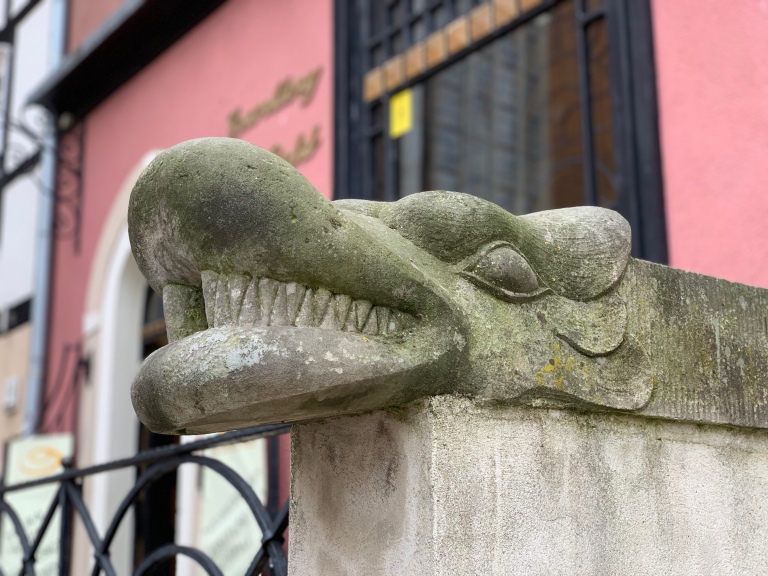