Phnom Penh is a contrast of poverty and opulence. As soon as we’re passed the Cambodia border from Vietnam, the roads were shockingly bad. They were under construction, but dusty and full of huge potholes.

Happy to see the Independence Monument when arriving in the city. It was advertised as a six hour bus trip but took eight. 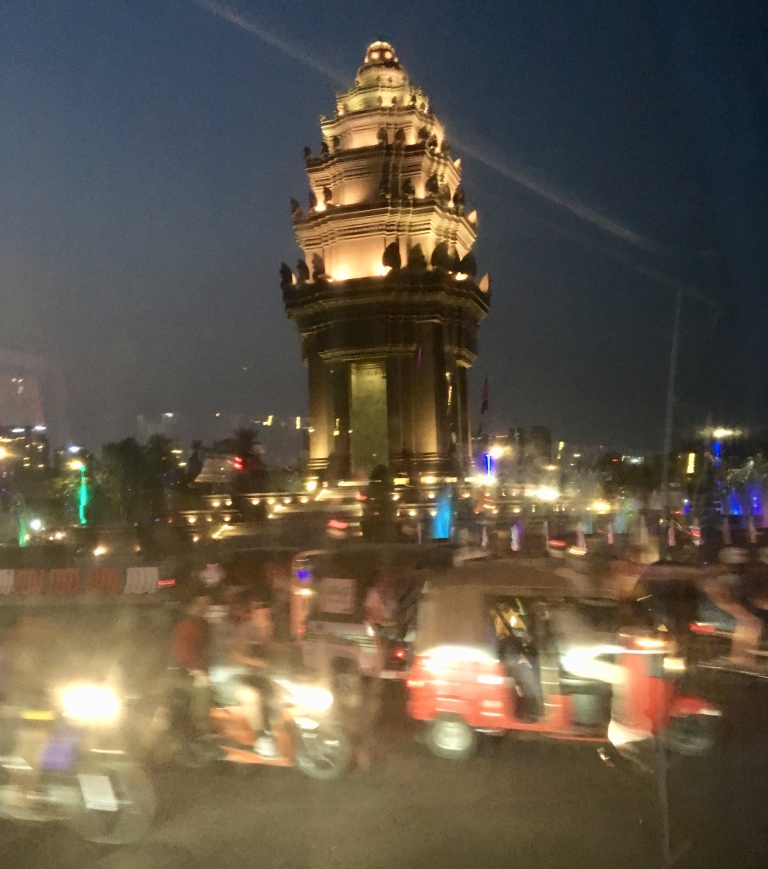 The most amazing are all the Buddhist temples! I was passing Wat Ounalom and could hear music and chanting. I was welcome to come in and watch as the monks proceeded past the visitors to collect offerings. 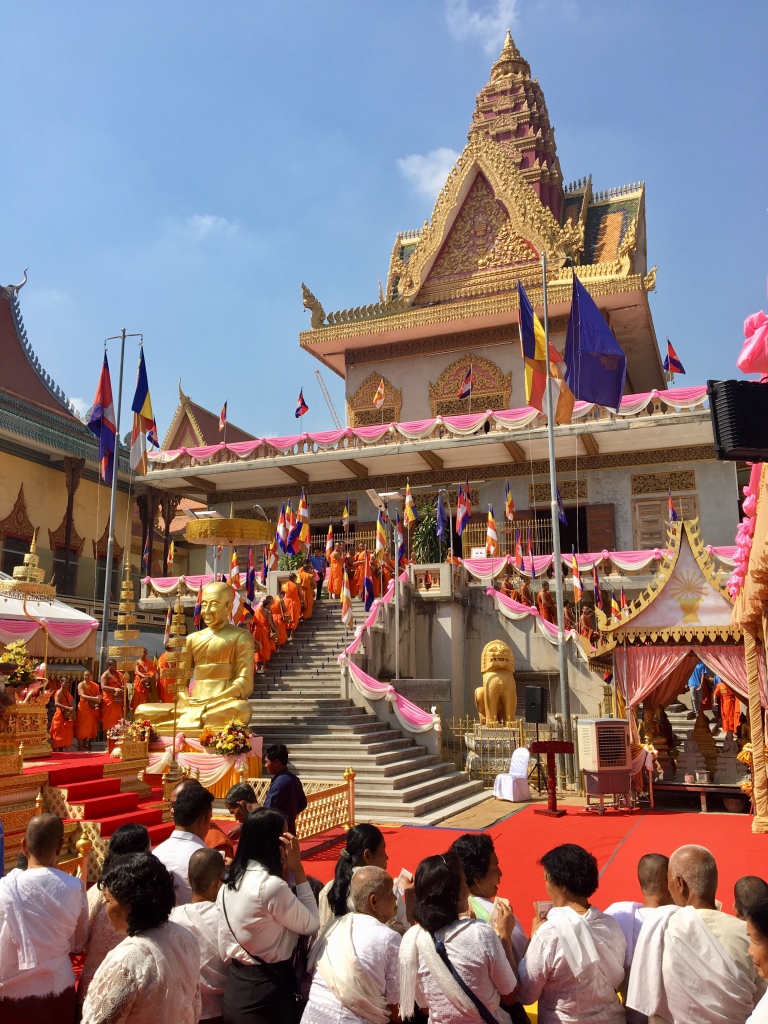 I was on my way back from the Royal Palace, a huge collection of amazing buildings. 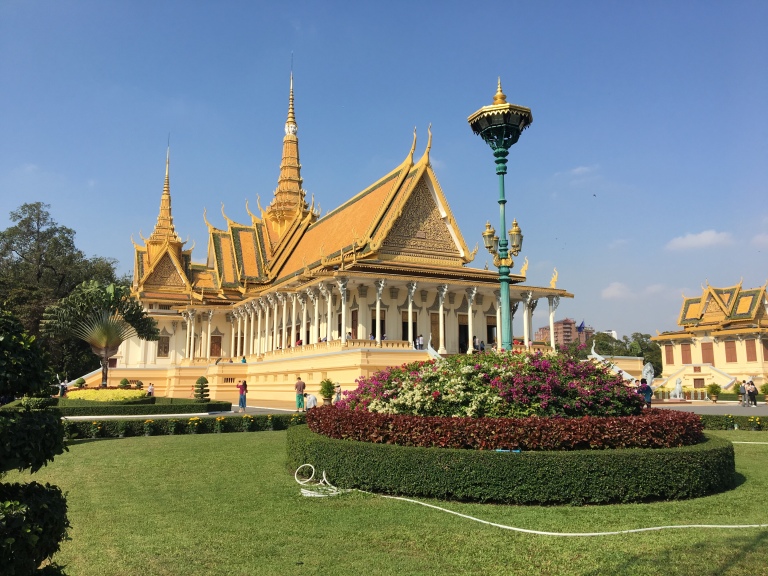 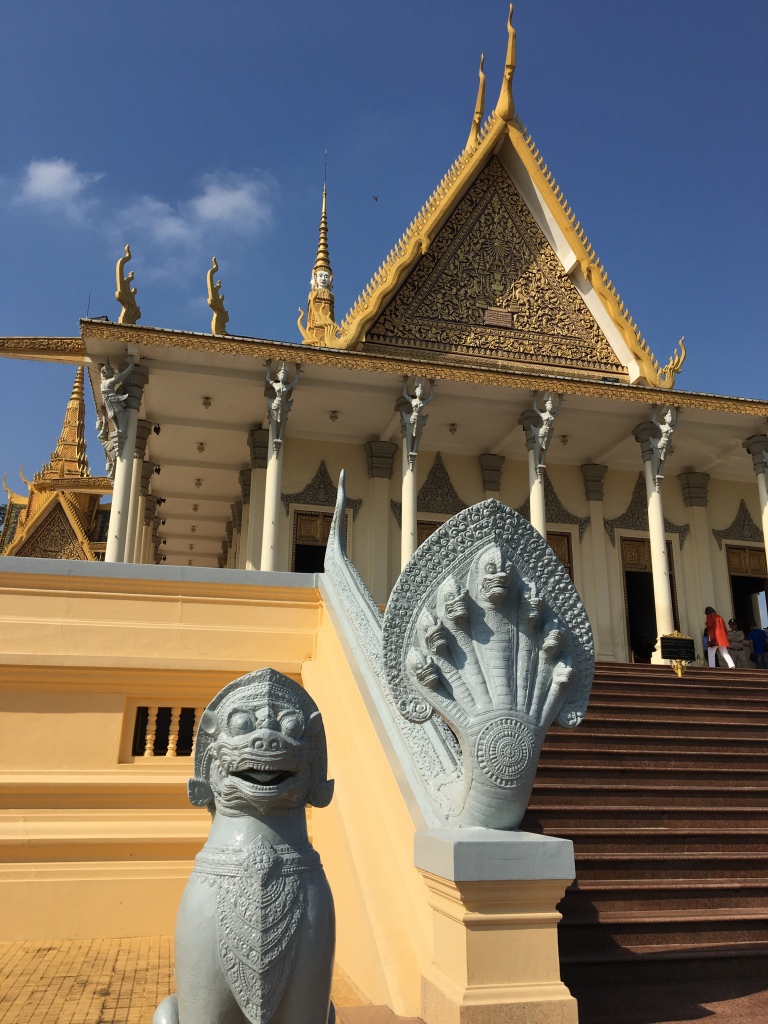 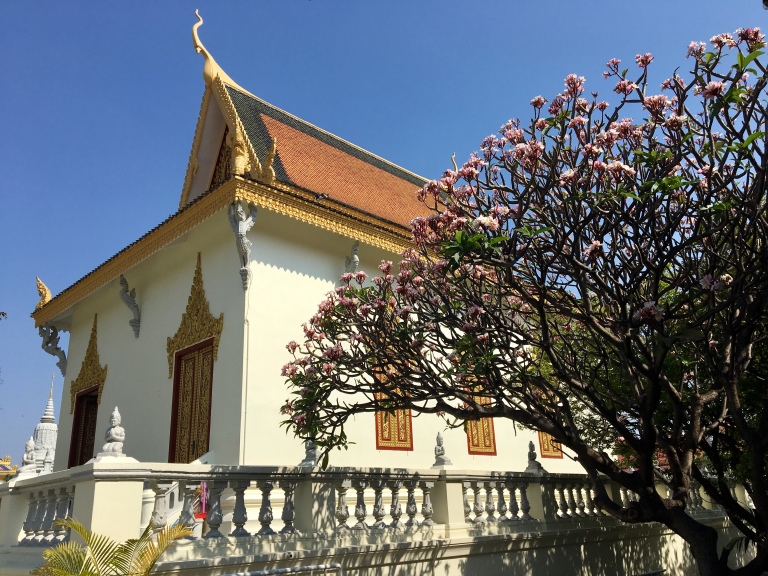 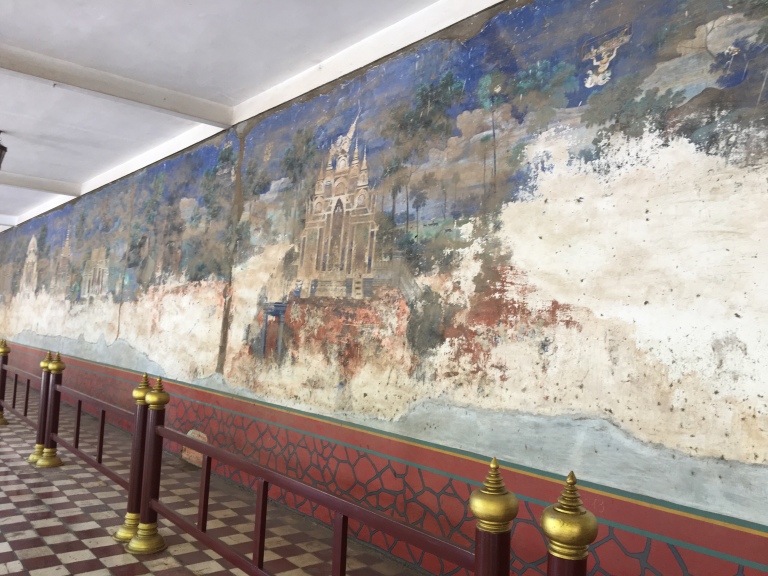 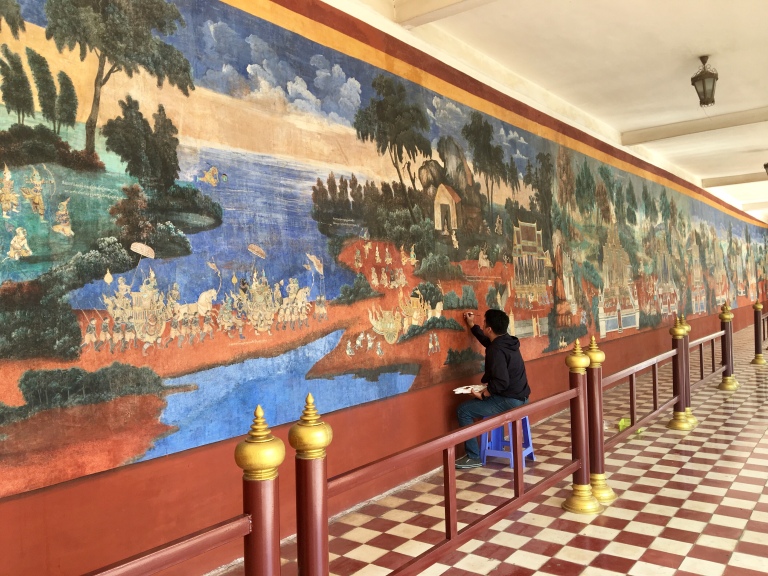 Wat Phnom is another large temple. 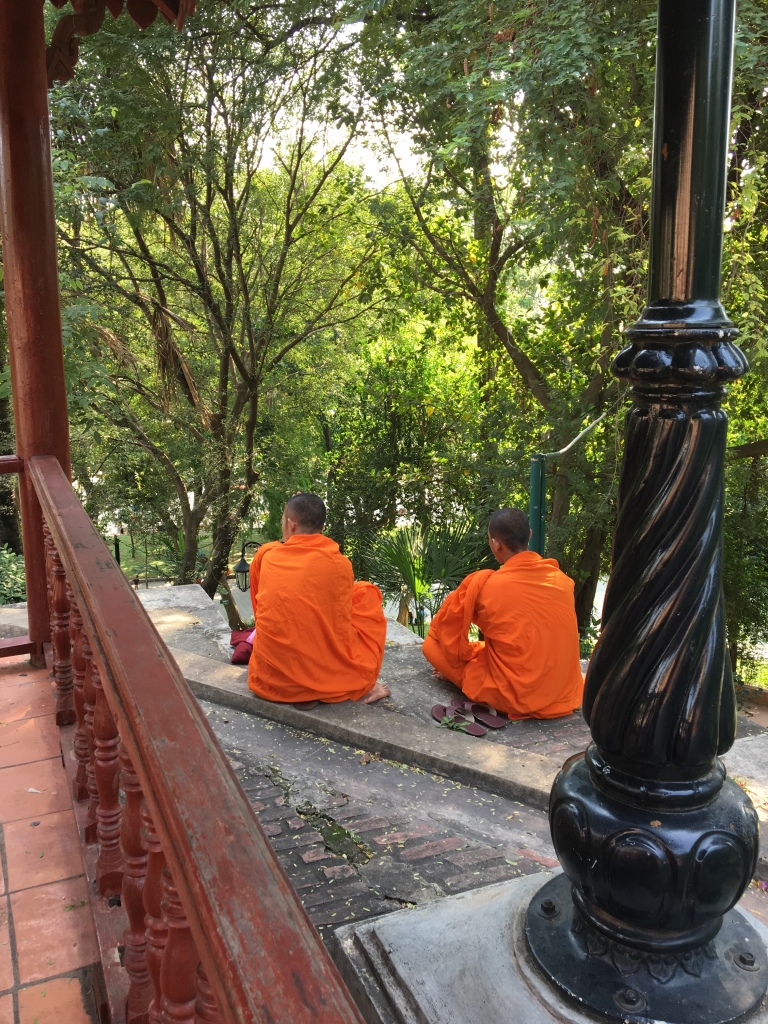 Every day the monks go around and wait to be offered food and money.

There are all the usual motorbikes, but also a large number of new full size pickup trucks and SUVs. 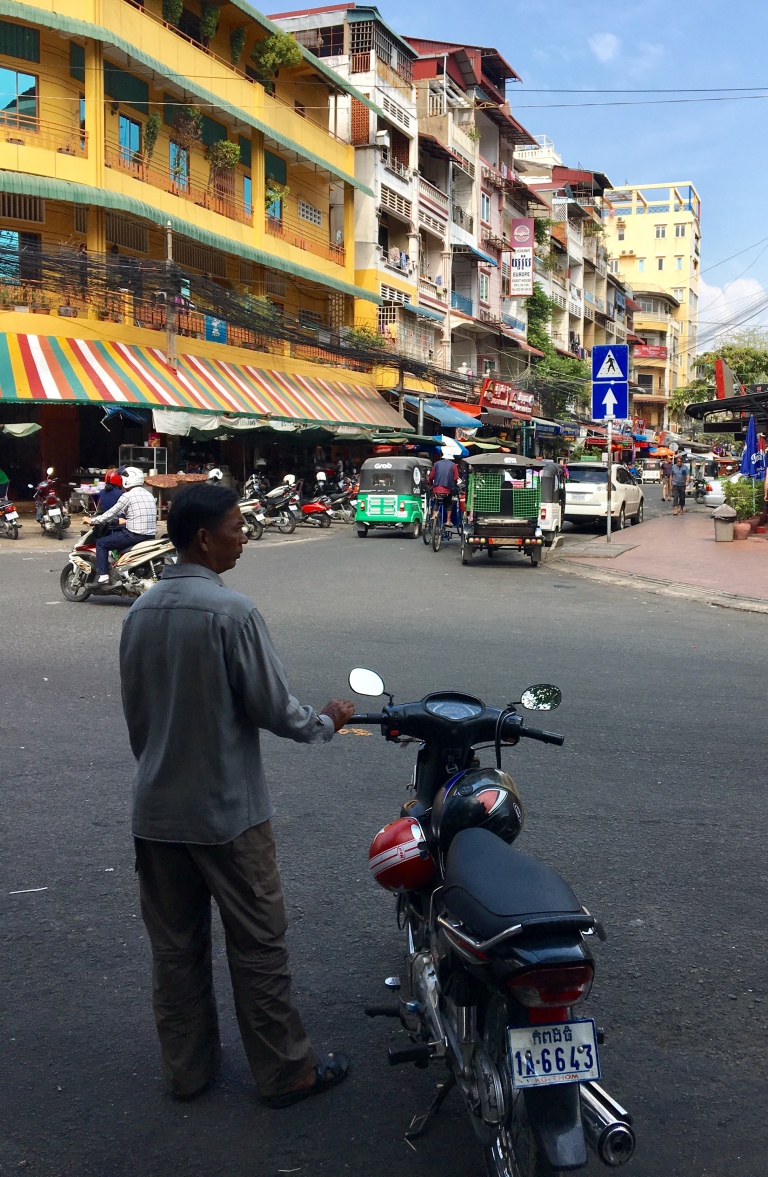 The Khmer people of Cambodia have been to hell and back. For eight years, starting in 1965 the USA bombed suspected supply chains in Cambodia. An estimated 500,000 people died from the bombing and thousands more from displacement, disease and starvation.

This misery opened the door for the Khmer Rouge, a communist party led by Pol Pot, to come into power. He quickly took control and imposed a brutal regime where another two million died in four years.

Have you seen ‘First They Killed My Father’? It is an excellent movie that explains it well.

First he forced people out the cities on to collective farms where people died from starvation and exhaustion.

Anyone who may question him were killed – those who had been part of the previous government, were educated, spoke another language.

Today I went to Tuol Sleng Genocide Museum. It is in the former Security Prison 21 (S-21) where people were detained and tortured. They estimate of the 17,000 people that were here, only twelve survived.

When the Vietnamese pushed Pol Pot out of Phnom Penh, they found fourteen bodies in the interrogation rooms. These fourteen graves are symbolic.

Photos of what they found. 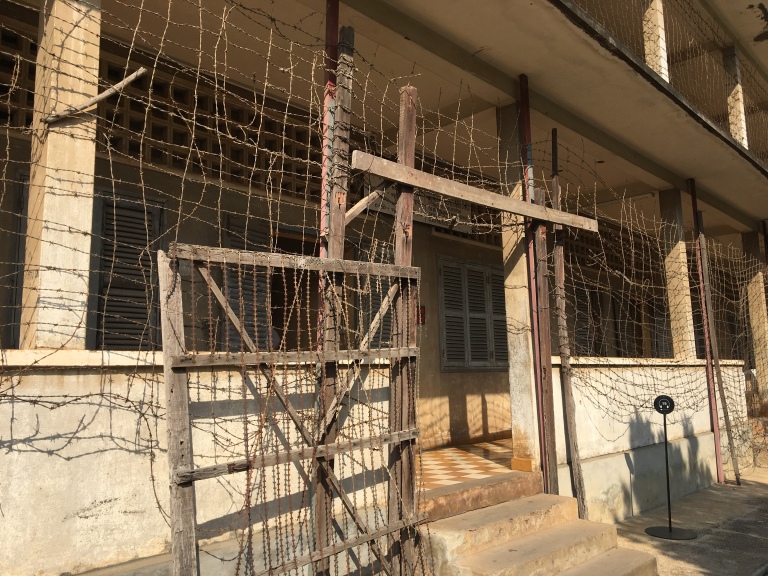 The prisoners were not usually murdered at this site, but were taken out to Choeung Ek, which is the most well known of the over 300 ‘killing fields’.

Just bought ‘The Killing Fields’ movie to watch tonight. It was released in 1984 so only five years after the defeat of Pol Pot. I remember seeing it then and knowing nothing about Cambodia.

8985 bodies were exhumed here in 43 of the 129 communal graves in this former orchard.

My friendly tuk tuk driver waited patiently for me at each stop and drove me past some monuments on the huge boulevards. 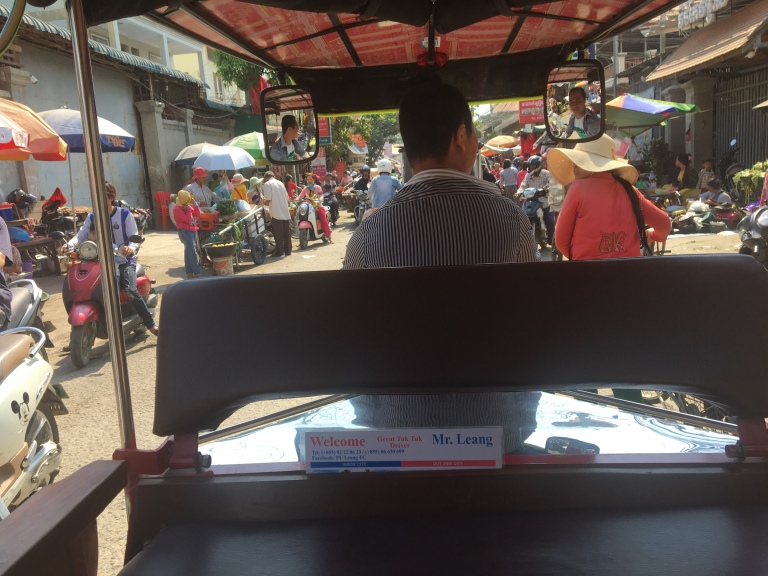 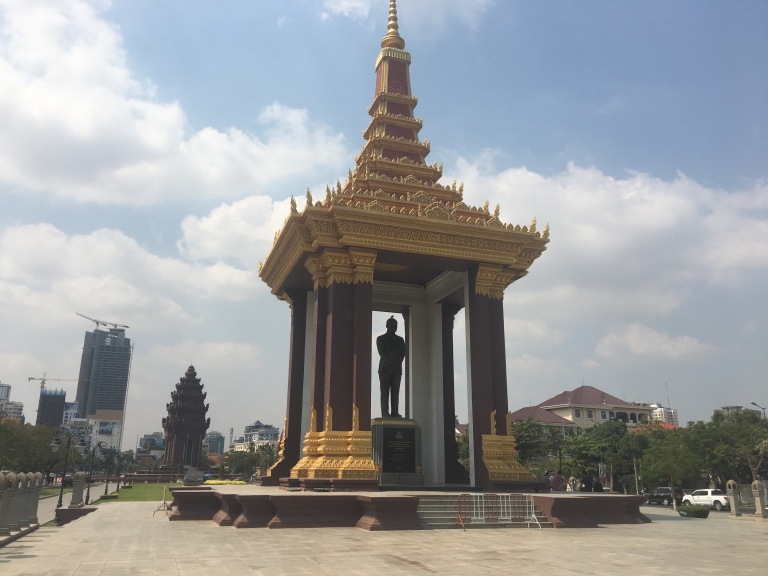 There are dozens of markets. In fact, you could say the whole town is a market!

But one big one is Phsar Thmey. Very interesting building with four wings from the central dome but just full of jewellery and regular clothing and souvenirs. 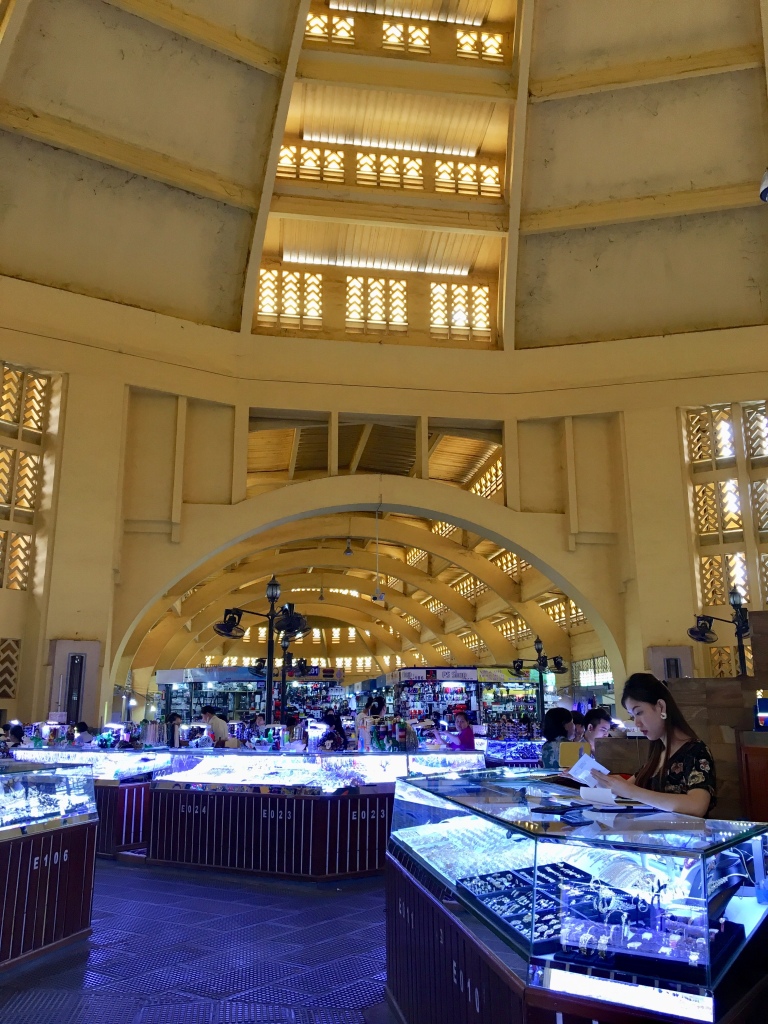 Not a lot of exciting food this week. My appetite is off with +34 oC and 75% humidity, though I did see some interesting things today as we were zipping past in the tuk tuk…

Veg curry with naan, for a change after a month of SE Asian food. $5.25 with a beer. 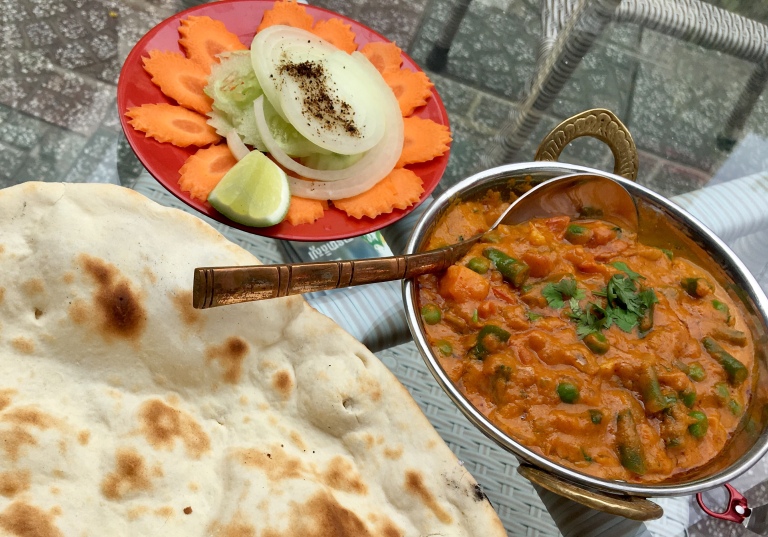 Tomorrow it is back on the bus headed to Battambang. Supposed to be six hours….