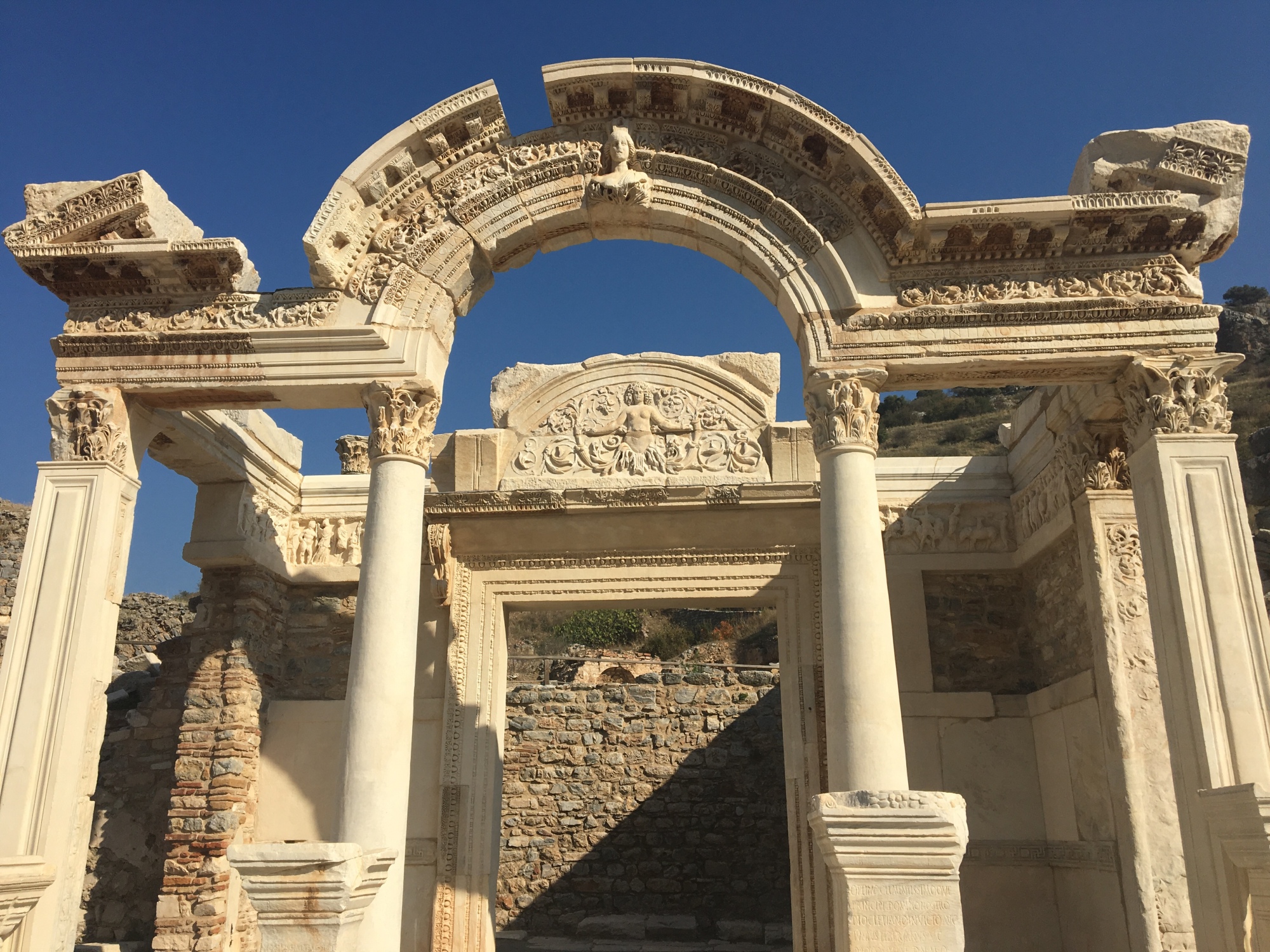 It’s a sunny 22oC on the Aegean coast today, and I can see why this part of the world was popular!

Ephesus was once considered the most important Greek city and the most important trading center in the Mediterranean region. Throughout history, it survived multiple attacks and changed hands many times between conquerors – Greek, Lydian, Persian, Roman.

It was originally a port city but overtime silt buildup and earthquakes caused so much deterioration that the port was lost. Today it is almost ten kilometres inland.

It is amazing to walk down the streets and imagine what it would be like to be transported back in time.

The first major building is the Odeon (2nd century AD) a dual purpose concert and senate hall. Could seat 1500. 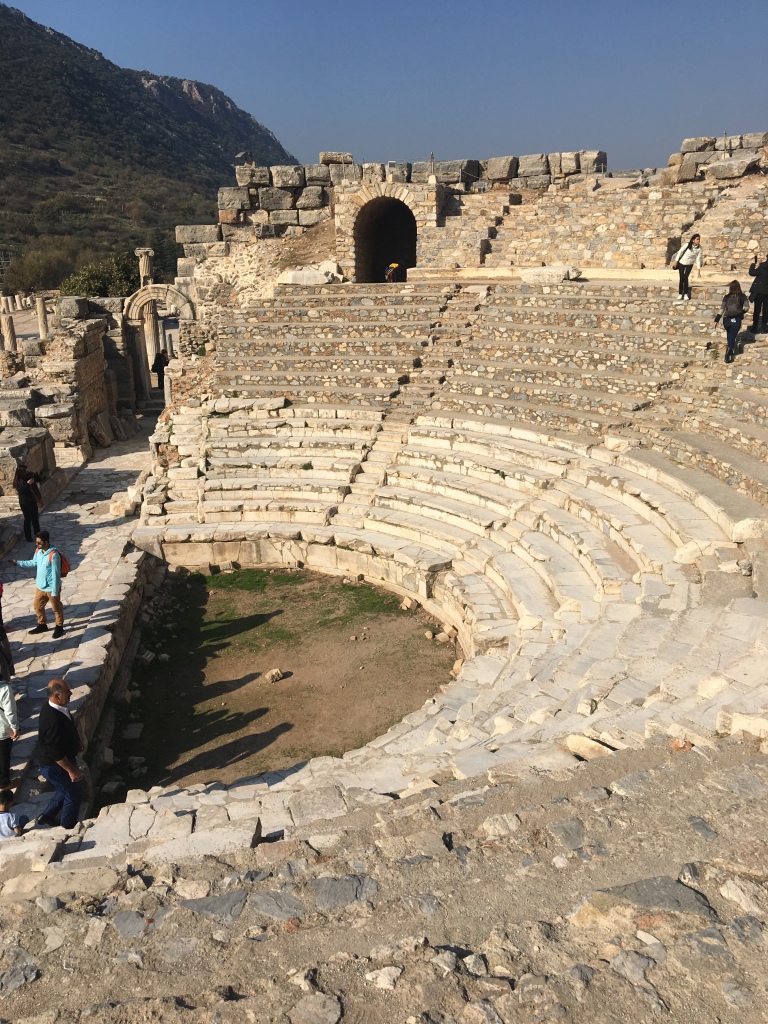 Curates Way was the Main Street

Along Curates Way there was the Temple of Hadrian (138AD) 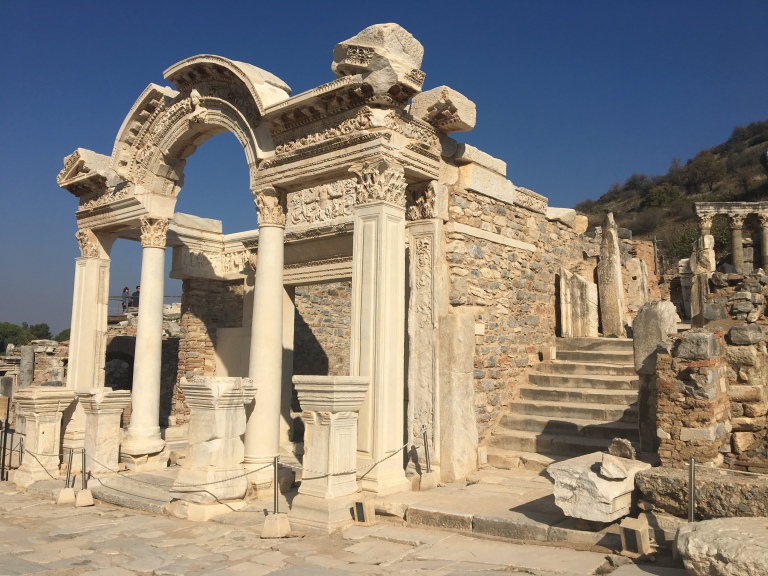 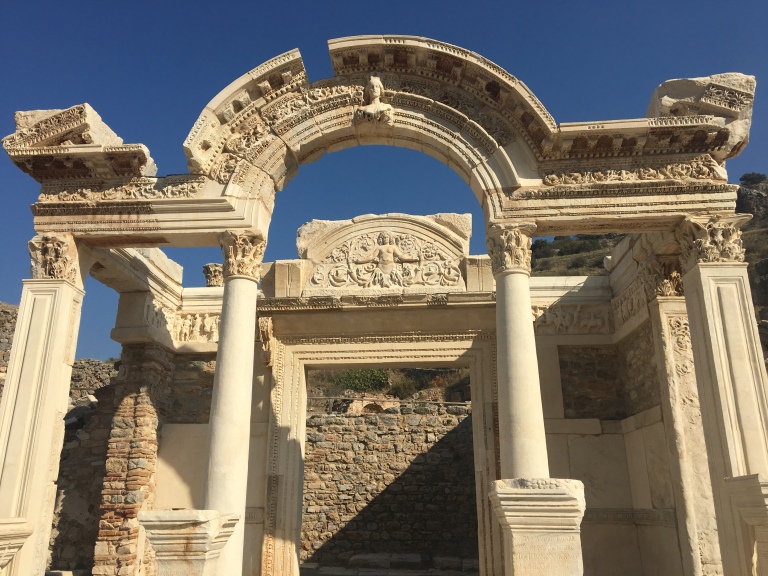 Looking through to the Agora market area

Then a turn to the right to Marble Street (the whole town is marble, so not sure why this street was singled out) to The Grand Theatre (41 to 117 AD) that could seat 25,000! 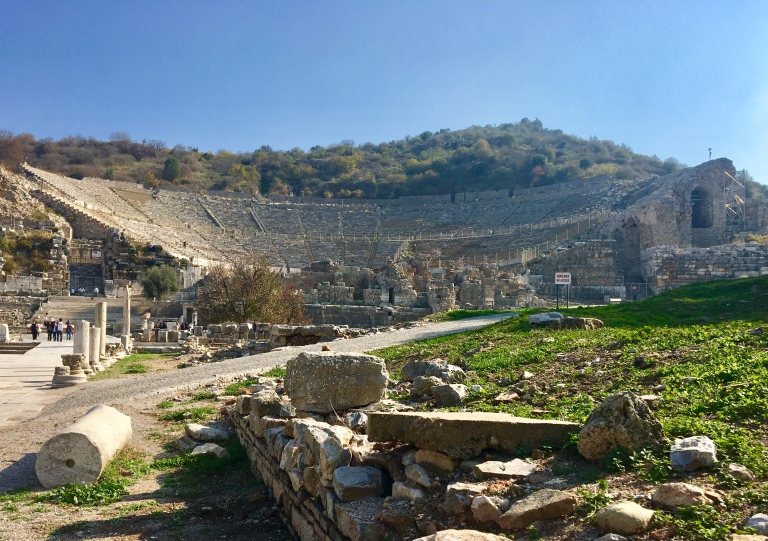 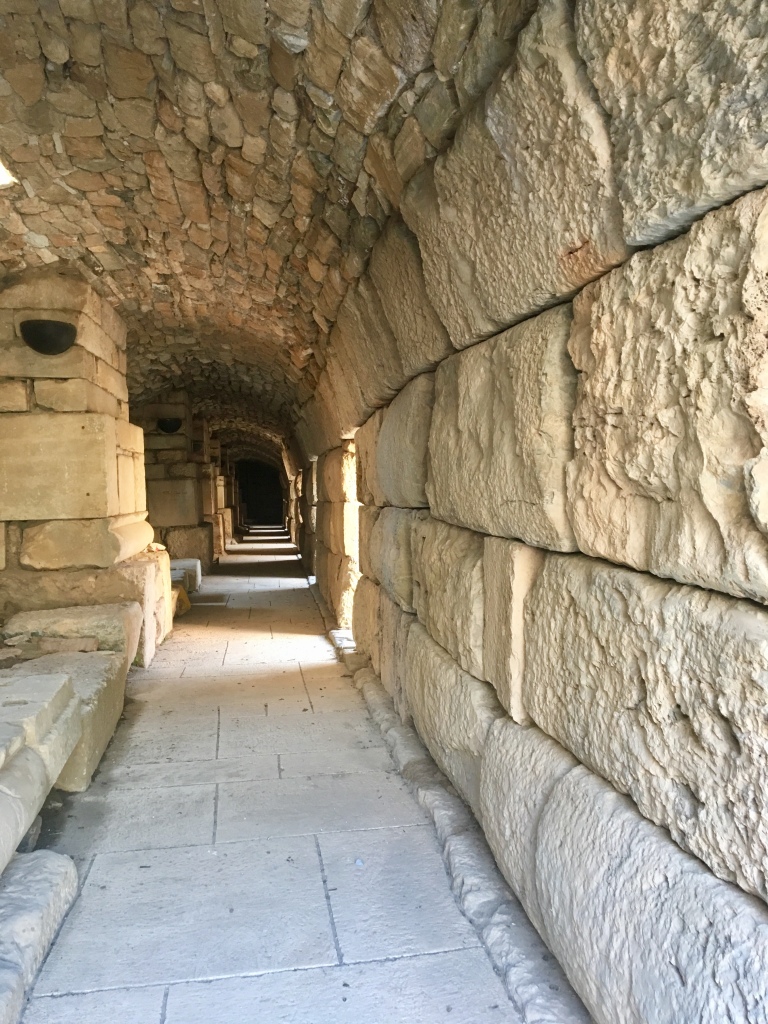 Looking down Port street to the now extinct port

And on to the vendors. I’m sorry to report I hadn’t had Turkish ice cream or raki yet. The ice cream is unique as it’s chewy and resists melting in the heat, and I’ve heard it is excellent. Raki is firewater! 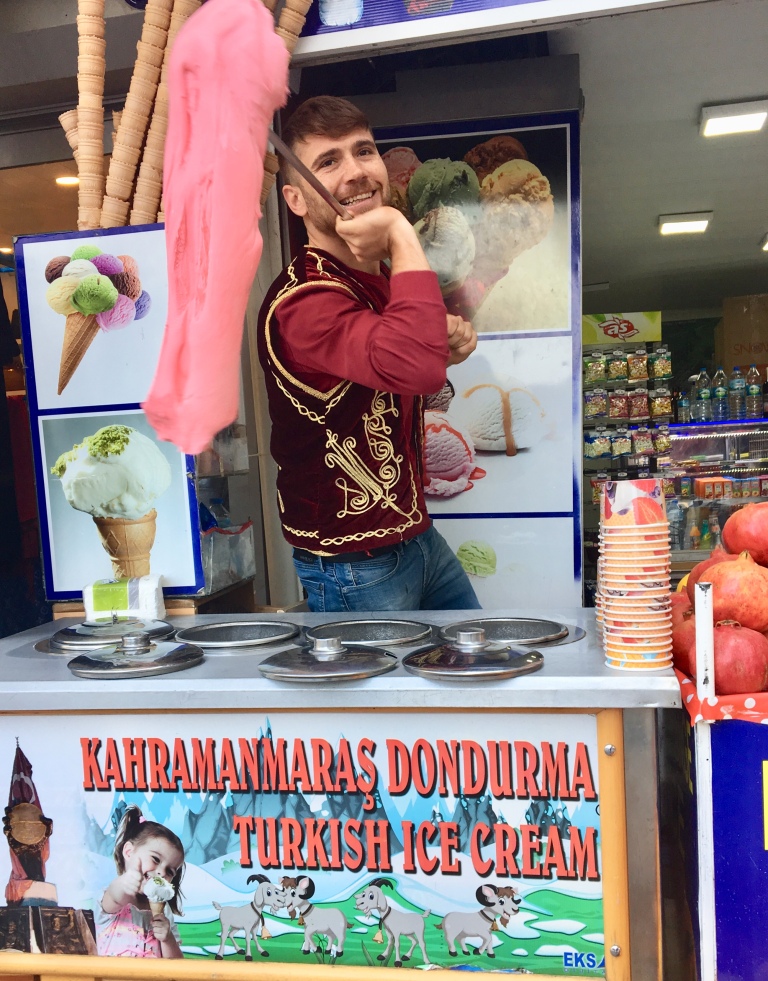 Many of the treasures from Ephesus are in the museum in Selçuk.

Pamukkale was a three hour drive inland from Kuşadası, where I’m staying on the coast.

It is a naturally occurring wonder of white travertine terraces created from the calcium chloride thermal waters that flow down the hill.

I thought the sign was rather funny as it obviously wet, and people are walking (barefoot only allowed) down the slope. It was extremely slippery though! Water was only lukewarm but it was a very unique experience! 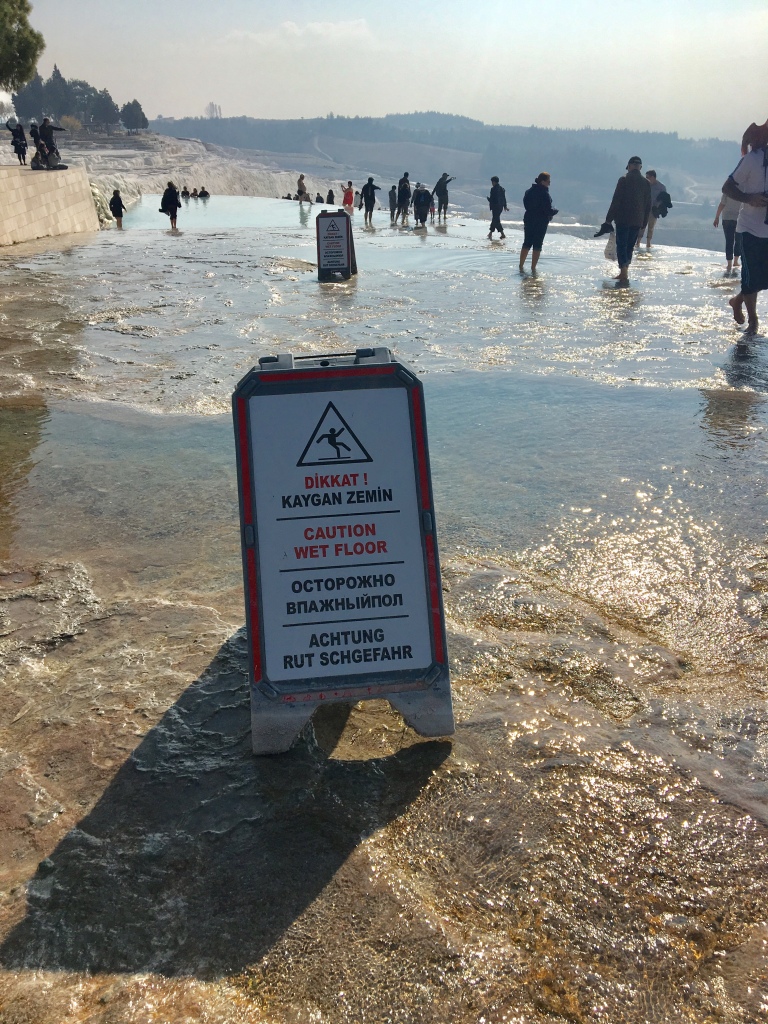 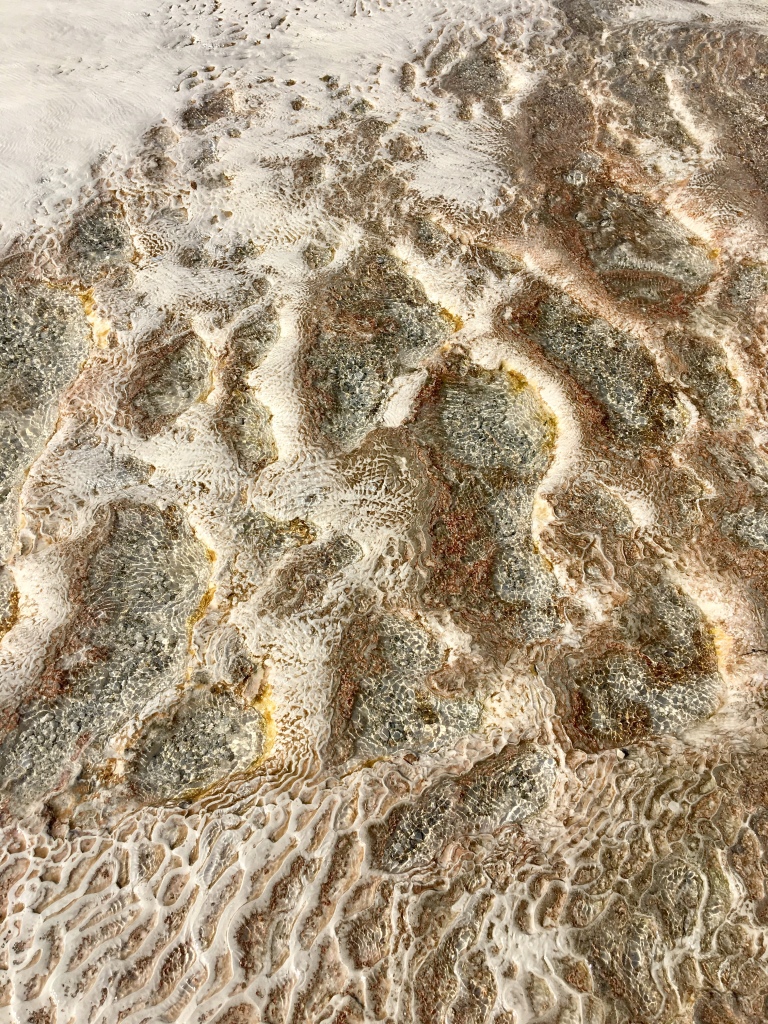 There is also the ancient spa city of Hierapolis (190 BC) beside it. 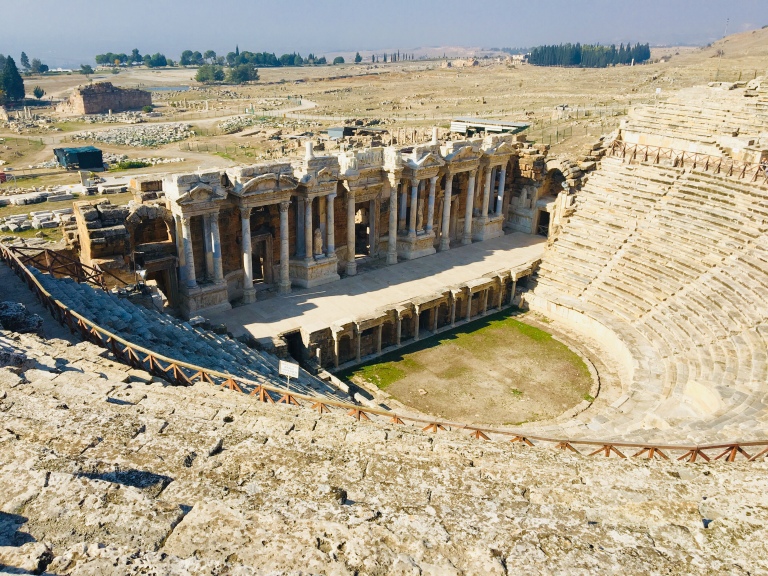 Kuşadası itself is pleasant and pretty with a nice seaside promenade. 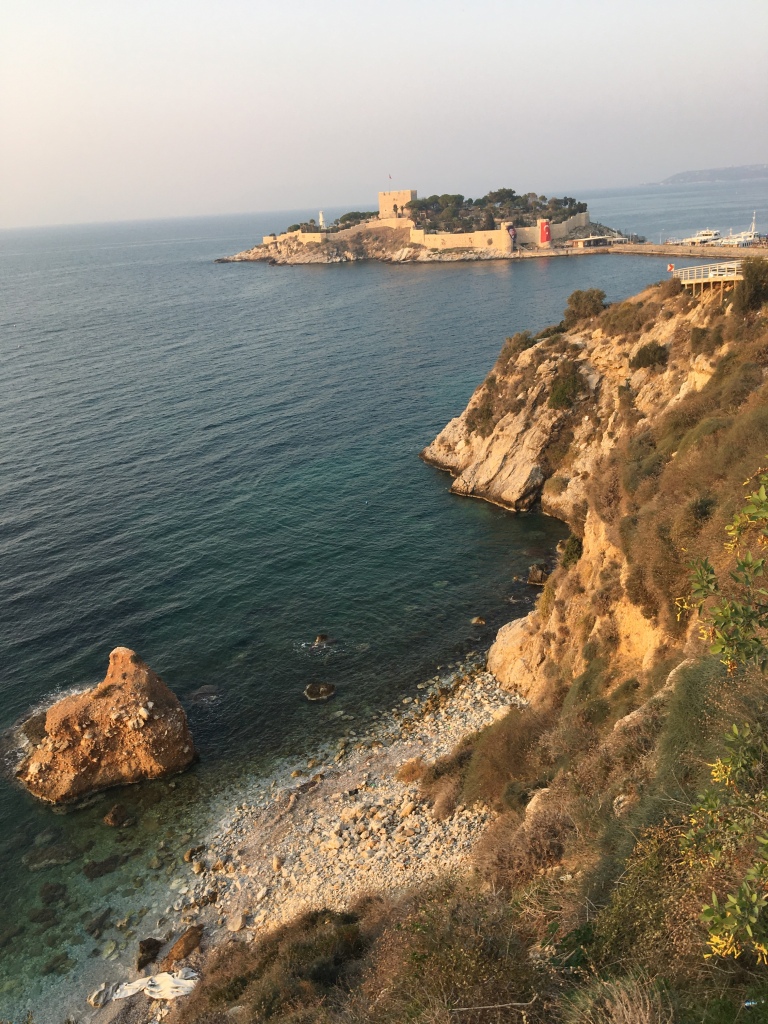 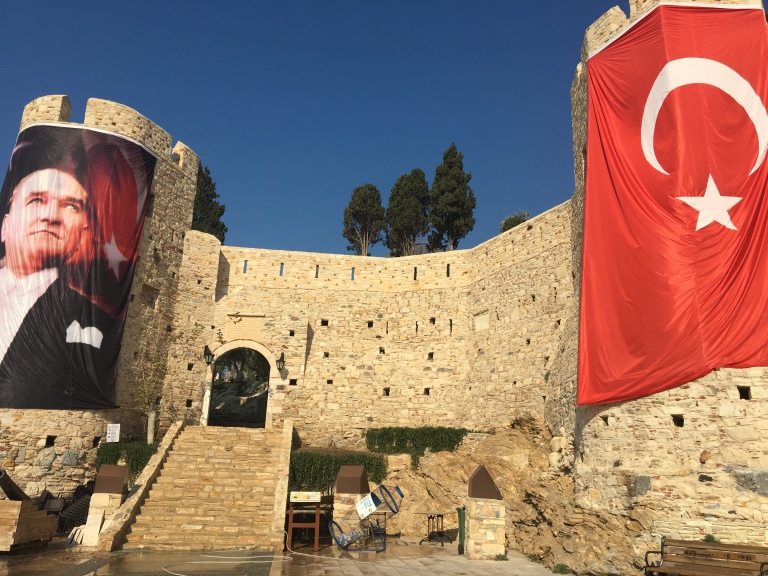 On the weekend I was walking around town and kept seeing people eating little donuts from numerous stands. I found out they were free and part of the day to commemorate the 80th anniversary of Mustafa Kemal Atatürk’s death. 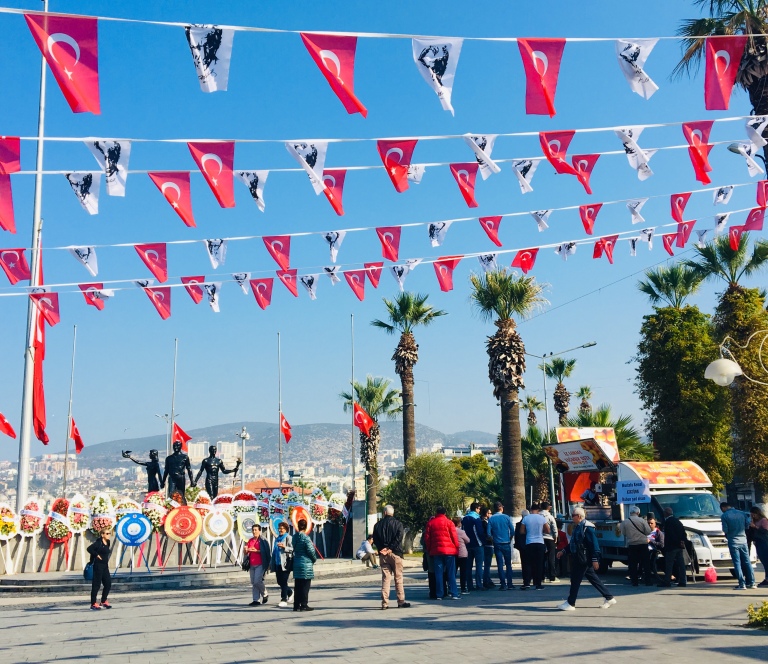 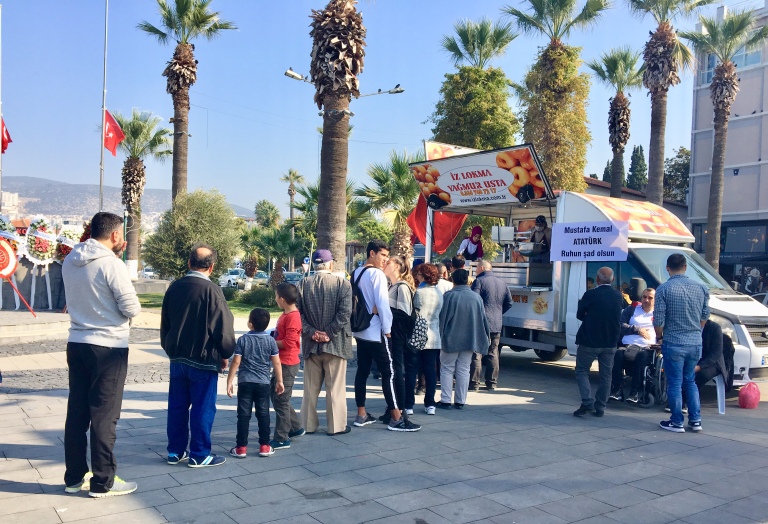 He was the first president when Turkey became a Republic in 1923, and it is so touching to see how revered he is.

He made huge changes to modernize Turkey, but one I appreciate every day, after Bulgaria and going to Greece, is the change to Latin alphabet!!

Gozleme was a very thinly rolled dough with spinach and cheese, then grilled. Yum!! 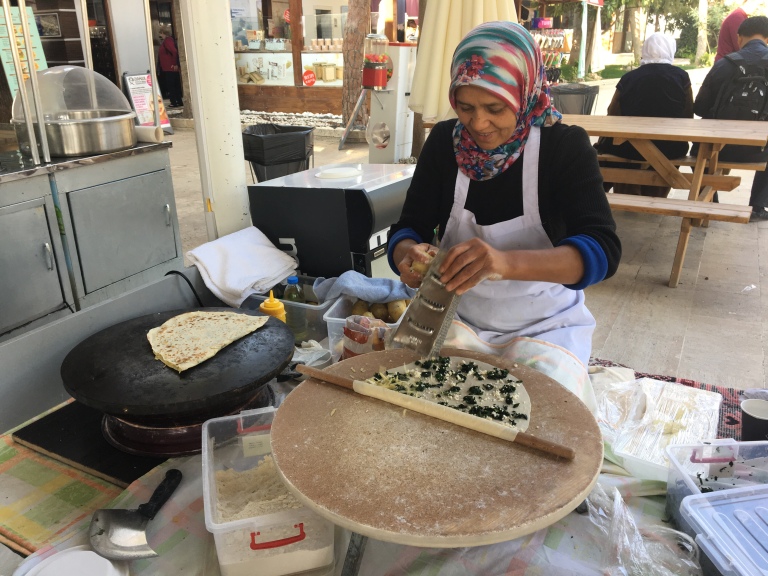 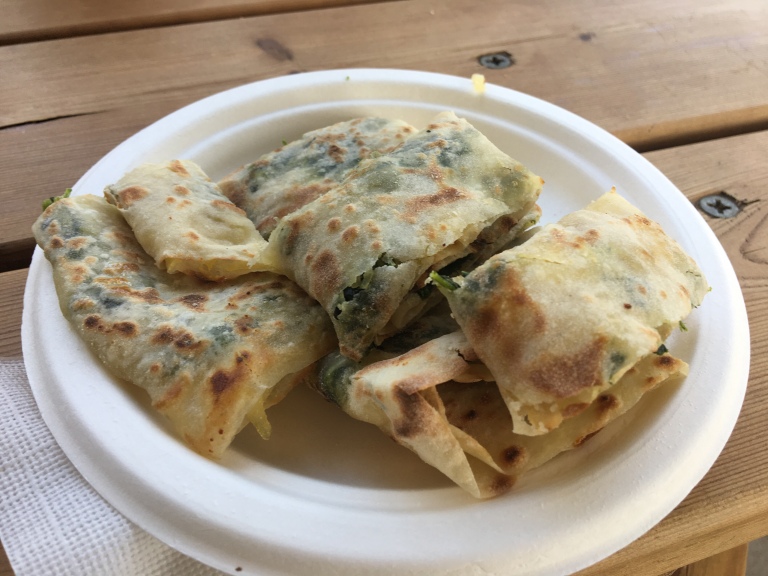 And my favourite, ‘point and eat’ meals that I have no clue what they are called! 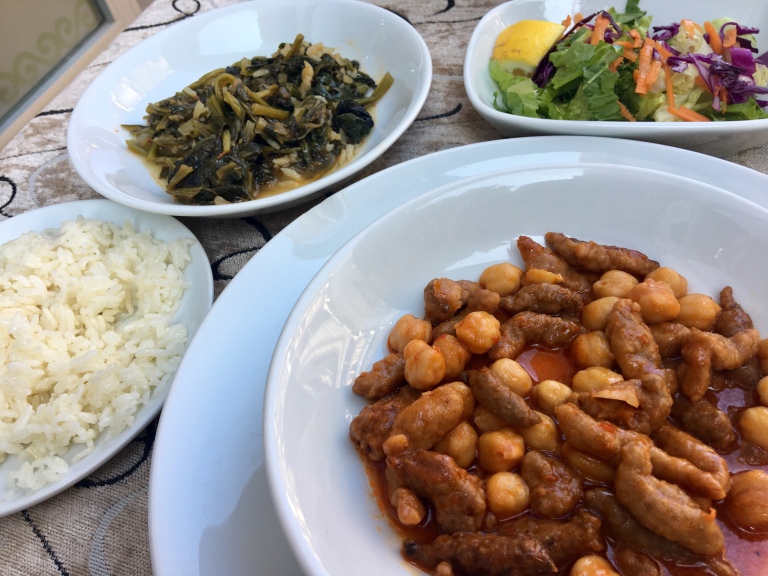 But I’ve also had lovely dining at my hotel on an outside sea view patio, being taken care of by the very kind Necati.

There are a batch of extremely cute kittens born at the hotel that scamper about, and he took this photo of one.

So it’s my last night in Turkey, for this visit! I definitely want to return. So many more beautiful places and such lovely people. Tourism has dropped with the coup and Syria, but I have felt extremely safe here. Come visit.

As Nike, the goddess of victory said, just ‘do it’!!

5 thoughts on “Kuşadası to Ephesus and Pamukkale”