1. Fascinating mix of old and new

2. Exotic mosques (after hundreds of churches)

4. Very friendly people (even the ones not trying to sell you a carpet)

6. They feed stray cats and dogs

I decided to stay in the Sultanahmet area as it has many of the ‘must see’ sites for a newcomer to Istanbul, but next time I would pick another area for a change. And there will be a ‘next’ time!!

The Sultanahmet Mosque, or Blue Mosque as it is usually called because of the blue tiles inside, was built from 1609 to 1616. There are major renovations going on inside and out, so it was difficult to really appreciate it’s beauty.

It is a active mosque, so it is closed to visitors six times a day during prayers. And it’s not hard to miss the ‘ezan ‘ or call to prayer, as it is broadcast on loudspeakers starting at two hours before dawn. I was out the other day between two mosques, so it was a live duet!

Blue Mosque from my hotel terrace

Hagia Sofia Mosque is almost beside the Blue Mosque, and is a former Greek Orthodox cathedral. There were two previous churches on this spot from 360 and 415 AD but they were destroyed by fire during riots. 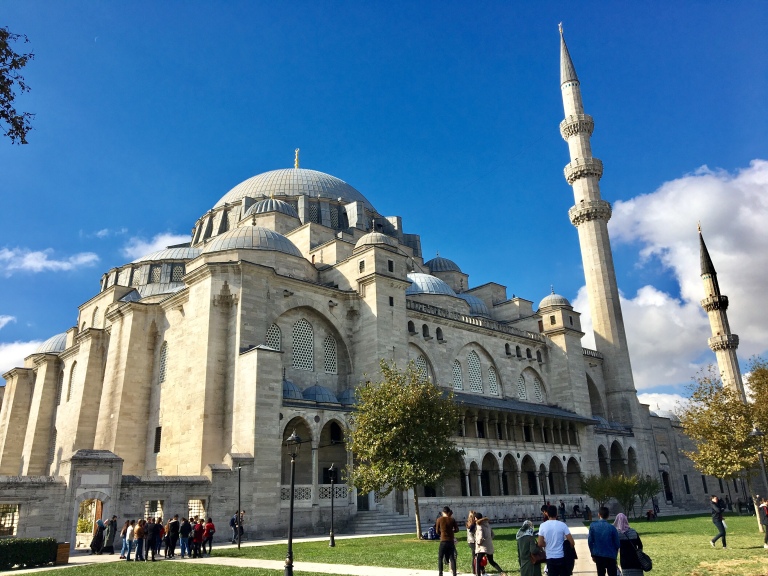 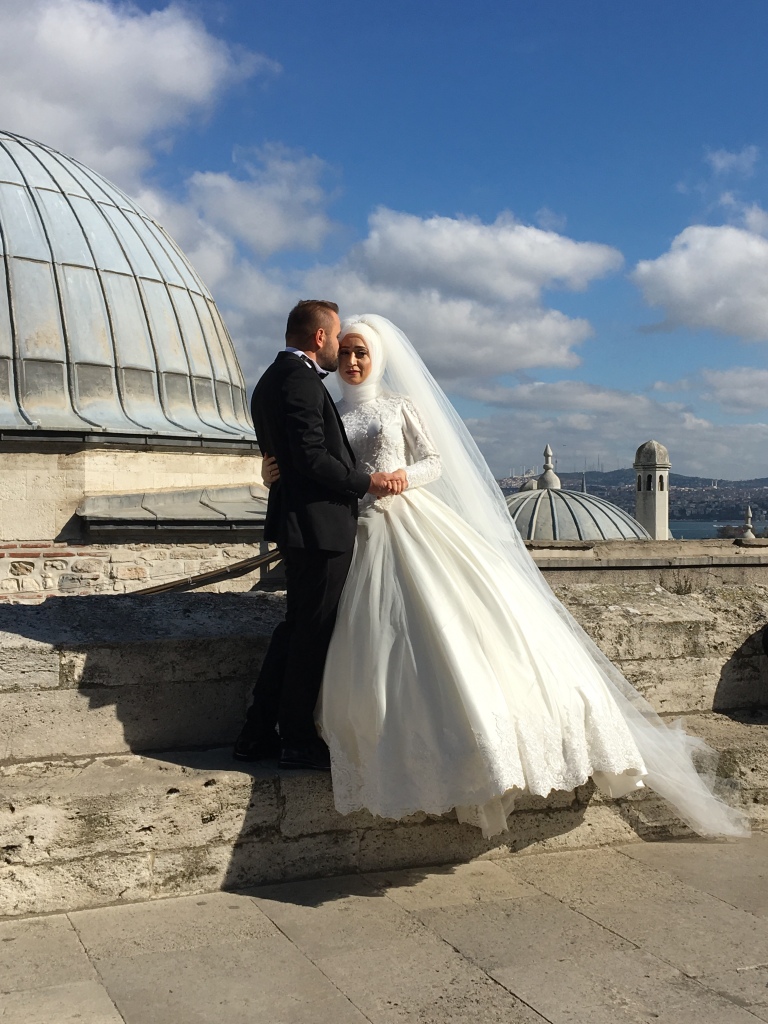 Topkapi Palace (15th century) was the main residence and administrative buildings for the Ottoman sultans. It’s a huge sprawling complex of private quarters for the sultan and his harem, pavilions overlooking the gardens and Bosphorus strait. 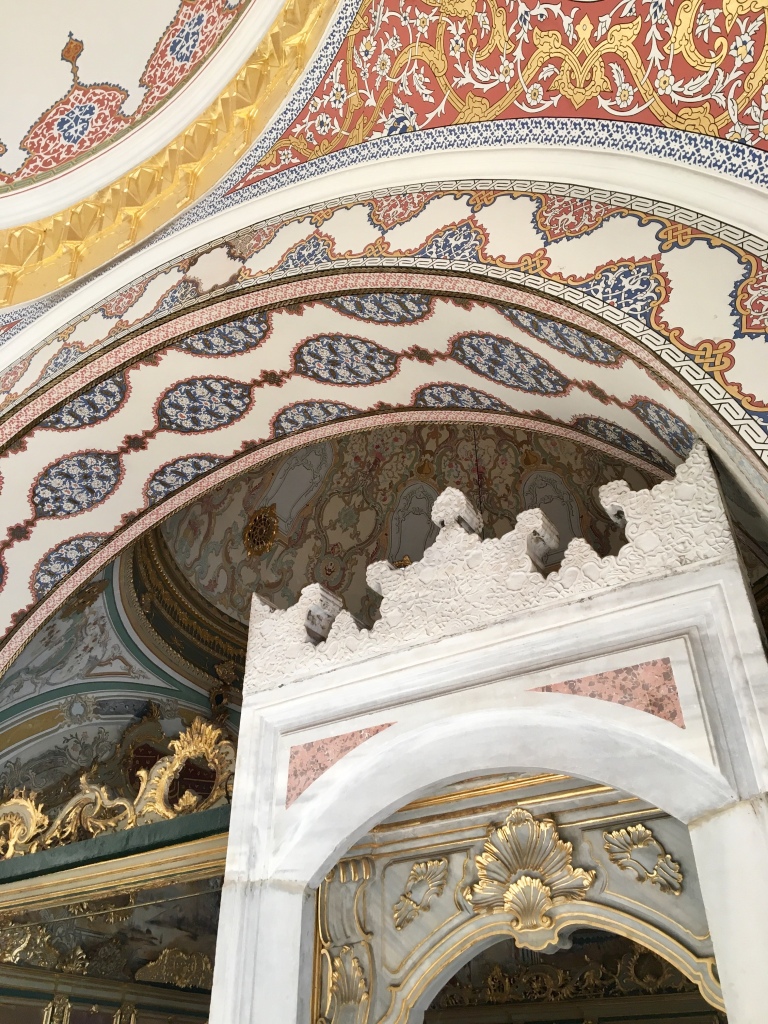 Grand Bazaar started in 1461 and is a huge market covered with vaulted ceilings, but just keeps going into the streets. There are sections for everything, and this continues outside as well. Today I went through the ‘Fabric’ area, then got lost in ‘Shoes’. 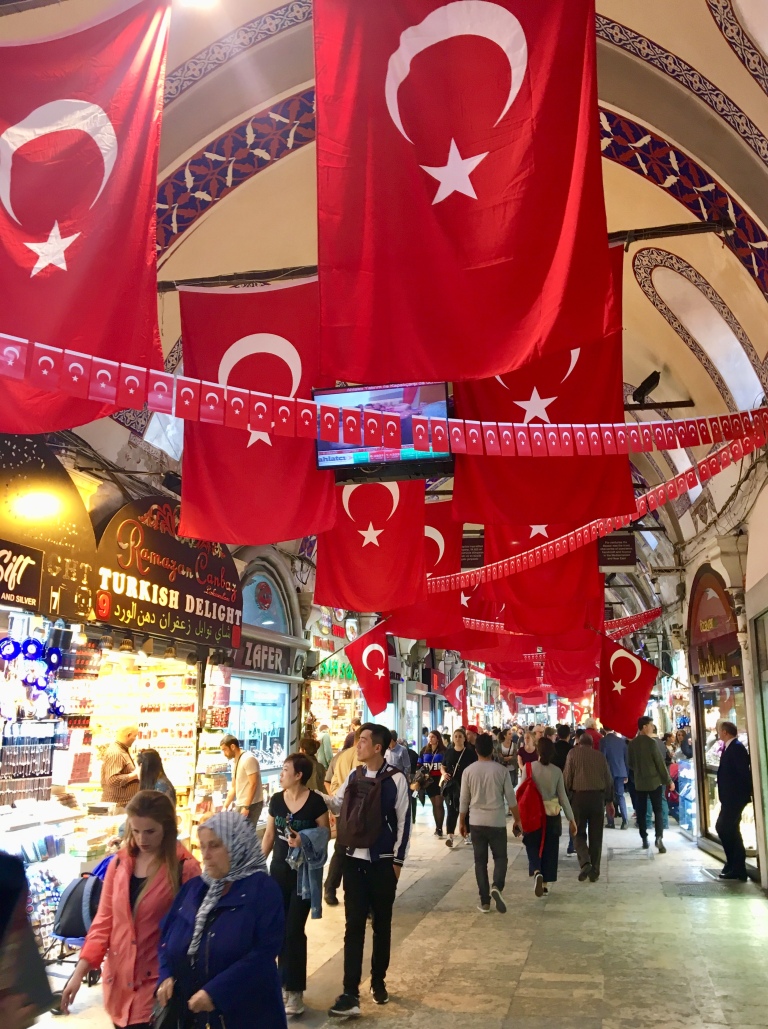 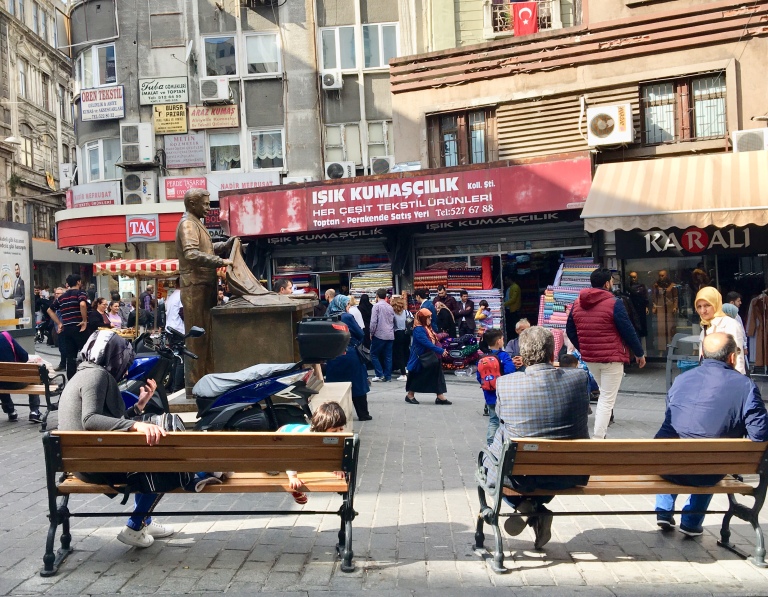 The Basilica Cistern (550 AD) was for underground water storage. There are 336 columns, and it would have been more special but the water is removed for renovations. There are two huge Medusa heads acting as bases. 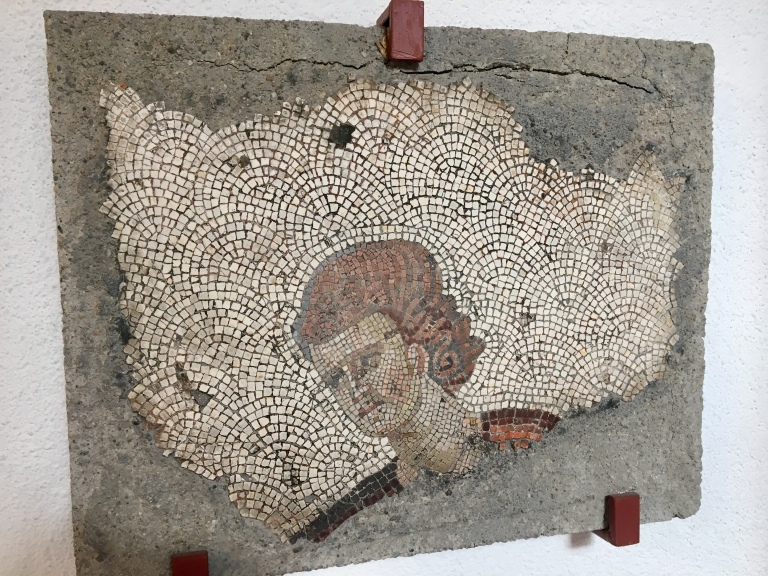 Galata Bridge joins Sultanahmet to Beyoğlu. On top are all the fishermen, while the bottom is lined with fish restaurants for the rest of us!

The bridge crosses the Golden Horn, which flows into the Bosphorus strait. I took a 90 minute boat trip (for less than $4) down the Bosphorus which separates Istanbul on the Europe side to the Asian side! I also took the Metro which goes under the strait to visit the Asian side.

Galata Tower is the most visible landmark in Beyoğlu.

Building a new mosque at Taksim Square in Beyoğlu.

They also had a ‘Tourist Police’ spot that looked a little bit serious! 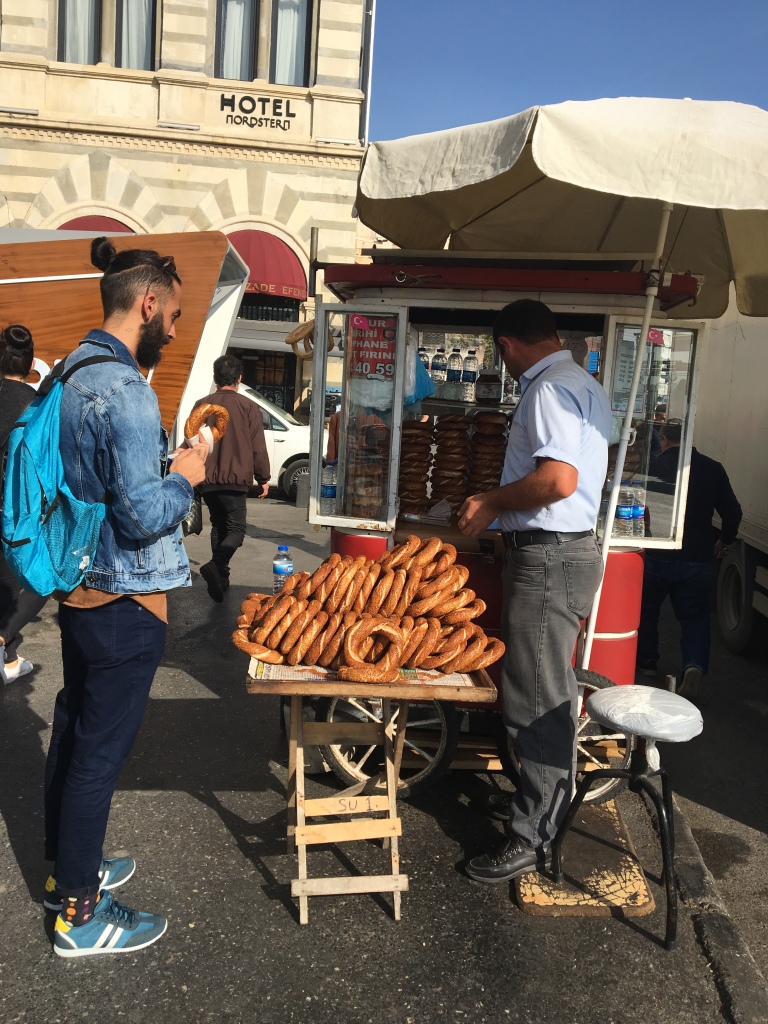 Turkish delight, and discovered I love it here! 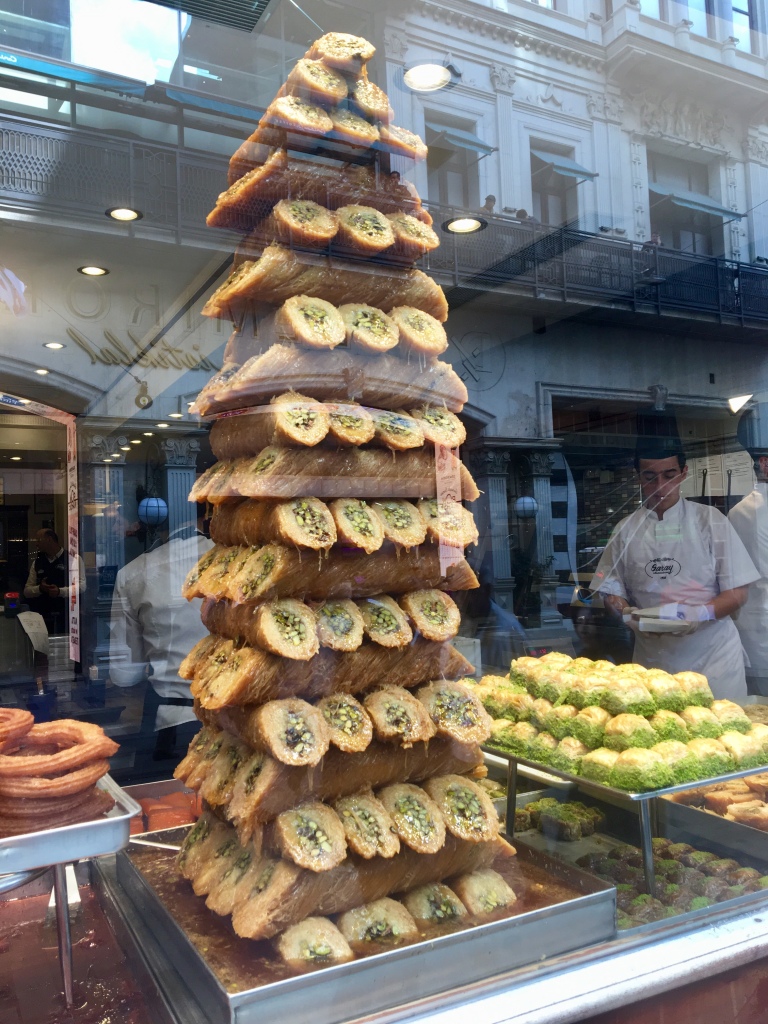 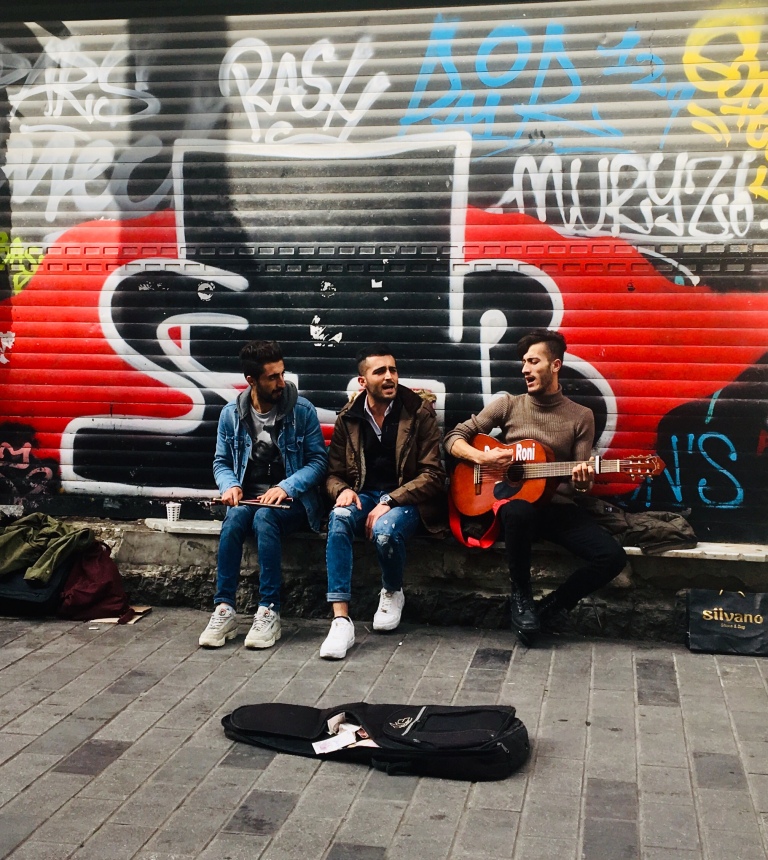 I’m not done with Turkey yet!

Tomorrow I have an early bus trip to Gallipoli, then Troy the next day. I’m back in Istanbul for a day, then flying to see Cappadocia, and flying back to see Ephesus before I head to Greece.