Not ‘bedless’, just without my own home. I’ve rented many hotels, apartments, houses for a day or week or month.  And I’ve had ‘gypsy’ beds from family and friends that also came with a good visit!

One year ago I handed in the keys to the apartment I had rented for a few months after selling my house.  Everything I wanted to keep was in a 8×8 foot storage locker. My last day of work was October 28. On November 2nd, I was on the plane to Spain.

I spent the first month in an apartment in Seville, recovering from the whirlwind while I explored the city at my leisure. It was a such a luxury after years of 2-3 week vacations.  Then I had to decide what I wanted to do for my next two months!  That ended up being a wonderful trip through southern Spain and into Portugal.

I returned to Canada for a few days, and then went to Merida, Mexico, where I had rented a house for six weeks. It was a fantastic time, and enjoyed having three friends come for a week each to enjoy the pool after a hot day in the city!

Back in Canada I started my move from Alberta to Vancouver Island, British Columbia. A good friend had offered me a place to stay when I was in town and that critical legal address everyone needs!  She also invited me to her summer home in Nova Scotia, and I used it as a base to explore Nova Scotia, Prince Edward Island and New Brunswick for a month. Of course I was thrilled too, as she had adopted my cat, Mac. He did well from the divorce and was very happy!  Between all this, I spent much time with my father in Saskatchewan, until he passed away in July.

So it has been quite the year. On this anniversary day, I’m past halfway through my four months in Europe, and am sitting in a beautiful apartment in San Sebastián, Spain.

But this travel lust has not come out of the blue. At age 20, I took a year off from school to figure out what I wanted to do. This letter to my parents was written 40 years ago from my six-month trip backpacking around Europe, solo except for a wonderful time with Heidi who I met on a train.

I have to wait until tomorrow morning to check the post office – hope there’s something there! We just got in today, Sunday. I feel good just having the time to write this – it’s been one of those weeks. I don’t know where to start! Guess I’ll begin with where I left off in Florence. That city has a lot to see! I must have worn an inch off my feet trying to see it all. Its a very nice city in that you can feel at home and find your way around. ‘Pretty’ describes Venice with all it’s canals. Next along the line was Rome, where we arrived on Tuesday. We went to Saint Peter’s in Vatican City, and the Vatican Museum (an enormous place). But most of Rome’s sights are building and outside things – like the Coliseum. There are hundreds of ruins and churches too – but they tend to get monotonous. Heidi and I are relieved to have finished with museums – unless we feel like it. In Italy there was so much we felt we had to see – it’s just too much to absorb at once. The two are now three! Heidi and I have a new partner – Carmen. We met her a week ago in our pension. We’ve been having a great time, but I don’t think she’ll be with us much longer because her rail pass is running out. She’s another Canadian from Vancouver.

But I should explain how we got to Spain – because it quite a train ride! Friday we were in Rome – not knowing if we were leaving because of the train strikes . Finally, about midnight, we left. The train was packed too – when it pulled in people were fighting like animals to get in. I managed to get a seat but Heidi and Carmen had to sit in the aisle most of the night. European trains are built with compartments that sit 6-8 people – these are along one side the car, while the aisle runs down the other side. The aisle is only a yard wide, so it’s not the most comfortable place to be for the night.

To break up the train ride we got off in Monte Carlo where we spent the afternoon. Didn’t go to the casino – but we looked at it from the outside. Not quite my league! It’s a beautiful town though, and we saw the Monaco Palace where Grace Kelly lives. Then we got another train to Barcelona – another night train. We sure saved money on a hotel! Here we stay in pensions – usually $2-3 a night. The one we got today is great – our own bathroom with shower, and breakfast served to us here if we want – all for $3.50. It’s a nice place too with an elevator! Last place we were in was on the sixth floor – with no elevator!

I was sorry to leave Italy – I was just beginning to meet people – and there is so much food I still wanted to try. We’re going to go out for a good meal tonight. Everyone is sleeping now – we haven’t had much lately. But I want to wash clothes – I had to. And I wanted to write this letter because it’s difficult to find a time and place. We met a nice guy on the train – he’s from Mexico – travels a lot and is great fun. He speaks Spanish to – made getting around today so easy! We’ll even know that the menu says tonight!

Well, we did it a little differently than planned- we went bar-hopping and eating as we went. The seafood here is great – had squid last night. But it’s not the fish that gave us our hangovers today! The wine is just as good. The back streets are lined with small bars – we  just stopped in here and there for a glass of wine and moved on. We even stopped to check out a ‘gay’ bar. They gave us a strange look!

I checked at the post office, but there wasn’t any mail. Maybe I’m too early.

Today is Hallowe’en. We were going to buy ourselves candy to eat, but I’m not sure our stomachs can handle it today! We certainly have our masks on!

Heidi booked her flight home when we were in Rome. It’s really crazy about the price too. It was cheaper to book Rome-Munich-Paris-Los Angeles, and not use the Rome-Munich part than to buy the ticket in Germany. She had checked before she left her grandparents and saved $150 – and it’s the same flight. It’s all because of the exchange rate.

Also in Rome we all got our hair cut. Mine feels so much neater. I’ve been having a riot shopping for gifts. I’m scared to come home too early before Christmas because I’ll want to show what I bought! Then I won’t have any Christmas presents for you.

Tomorrow we’re heading down the coast to Valencia (orange, anyone?). So far I love it here. I know we’re going to have a good time.

Must go now – love to all. Les 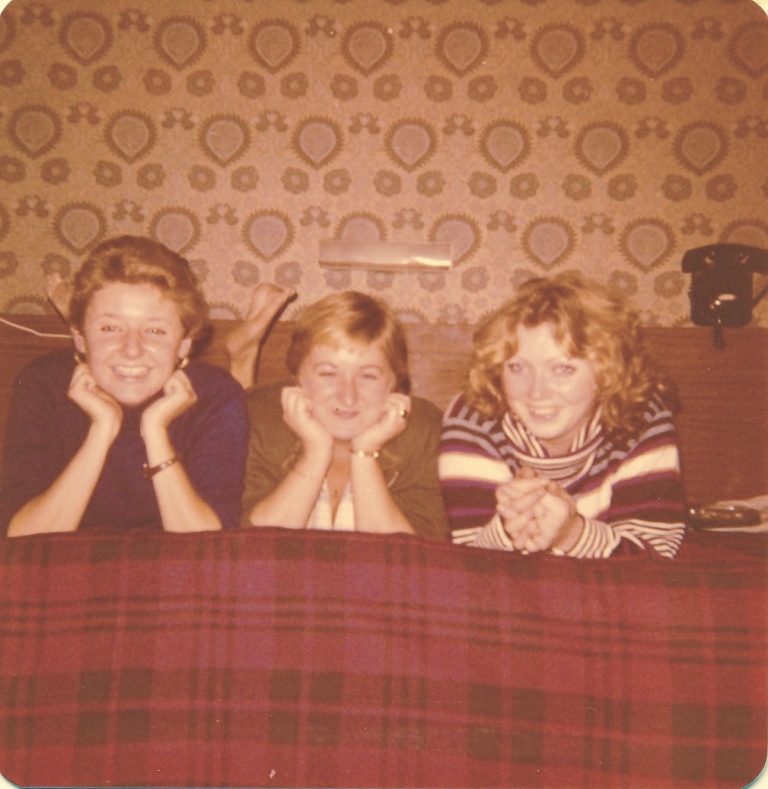 Flash forward to 2017. I’m done with hostels and pensions, though still travelling light with a small bag!

I’m grateful to my family and friends that keep in touch and make the world a smaller place. I’ll keep posting as long as you want to know what I’m up too!

And looking forward to what adventure the next year brings!

2 thoughts on “A Year of Being Homeless”