When I walked out of the train station in Split early Friday afternoon, I was overwhelmed! It was incrediblely sunny and a hot 26oC, after leaving rain and 11 in Zagreb.  The short street in front of the train station also included the bus station and dock full of ferries trying to load/unload cars and people.  Horns were blaring.  One sidewalk was jammed with souvenir and food stands, purveyors of tour groups and rental cars.  The other sidewalk along the water was full of sunburnt or pasty white people trying to fight their way.

It was better when I made it around the corner on a long wide promenade called ‘Riva’.  Still lots of people but it was amazingly ‘Mediterranean’!! I love palm trees and ocean!! Split is a natural harbour protected by mountains. 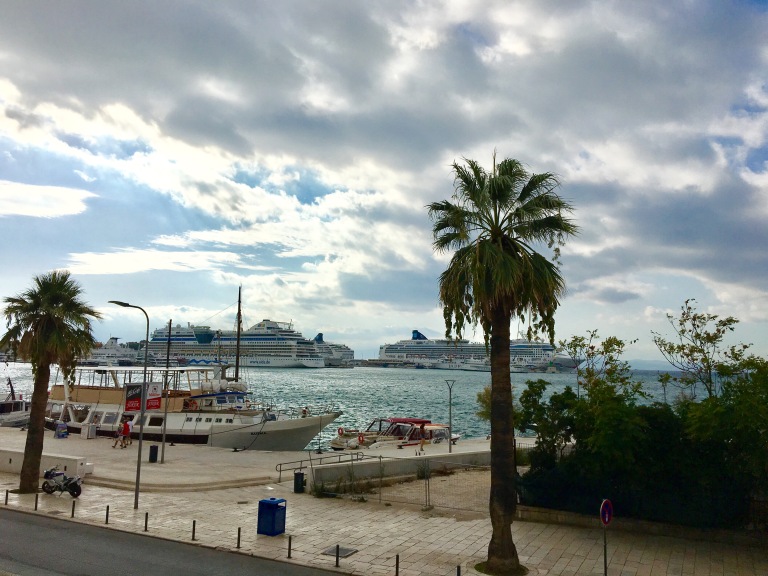 I passed the front of the Diocletian Palace, built 1700 years ago for a Roman Emperor,  from which the city of Split developed from.

The cathedral inside the palace walls is a great landmark for knowing where you are. 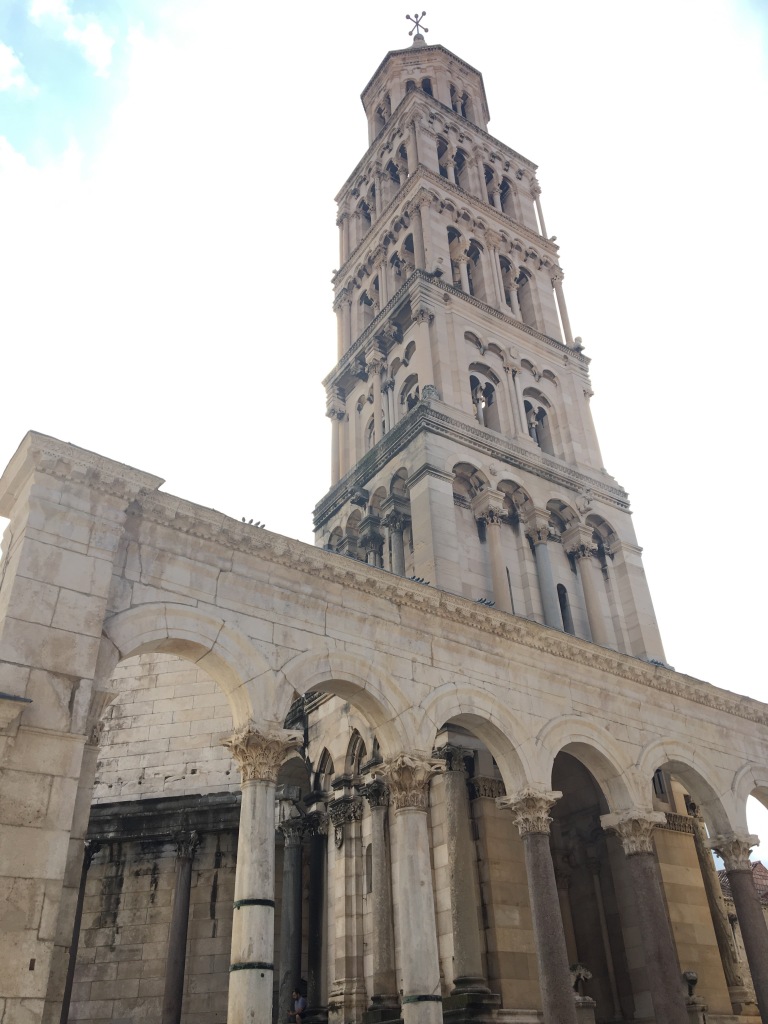 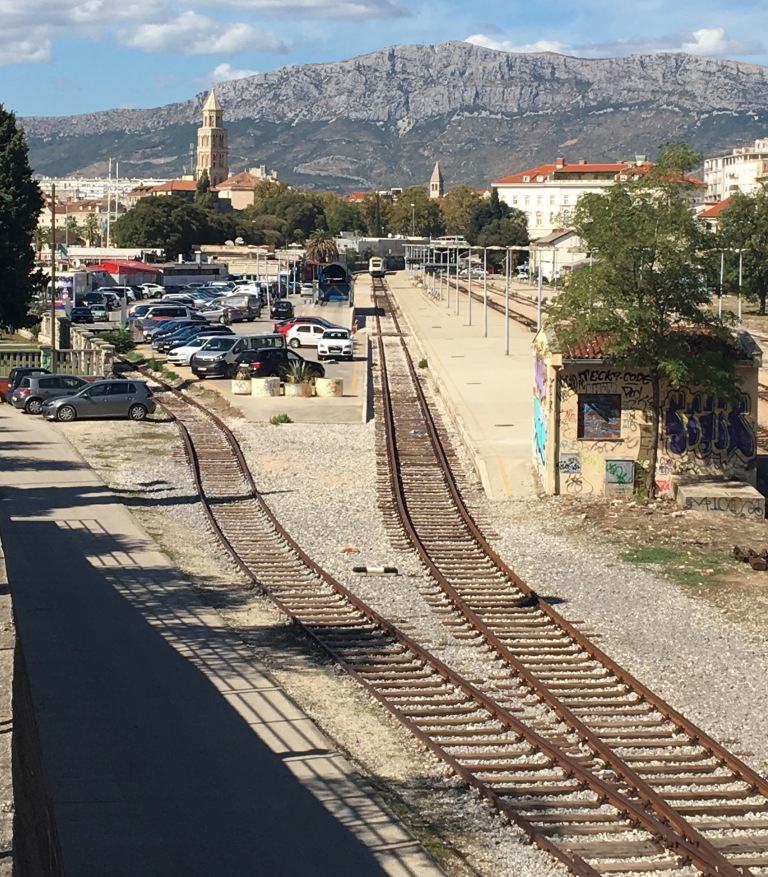 Within the palace there are the ‘Golden Gates’ which the Emperor walked through in 305 AD.  Now it is just tour groups and shoppers… 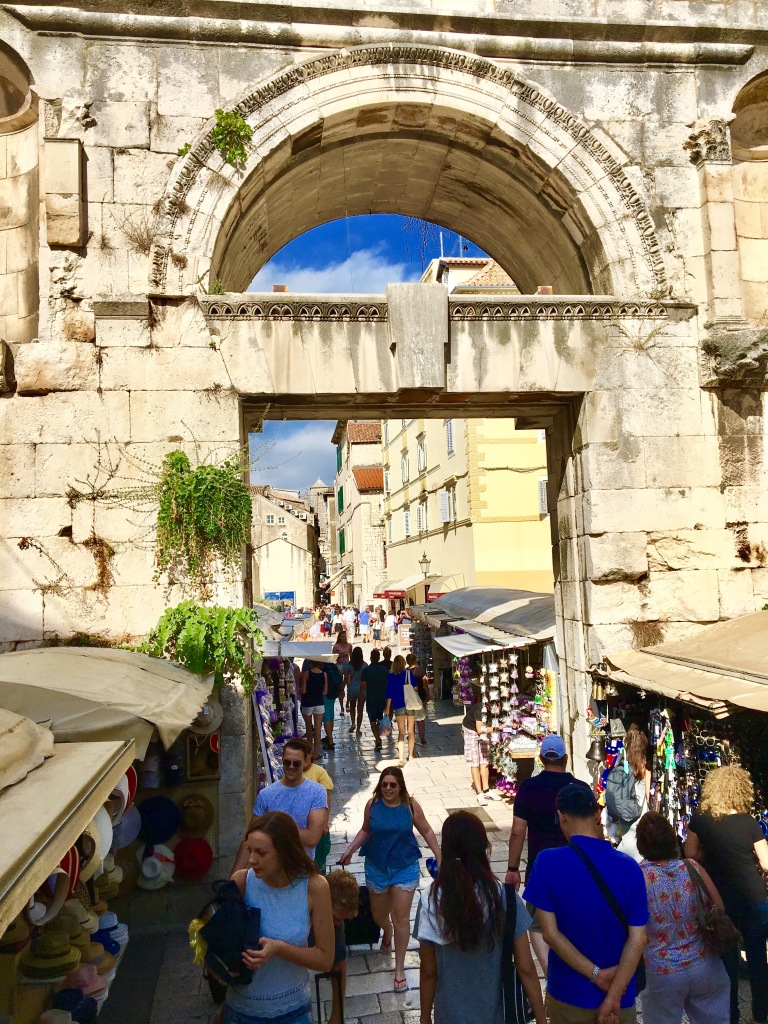 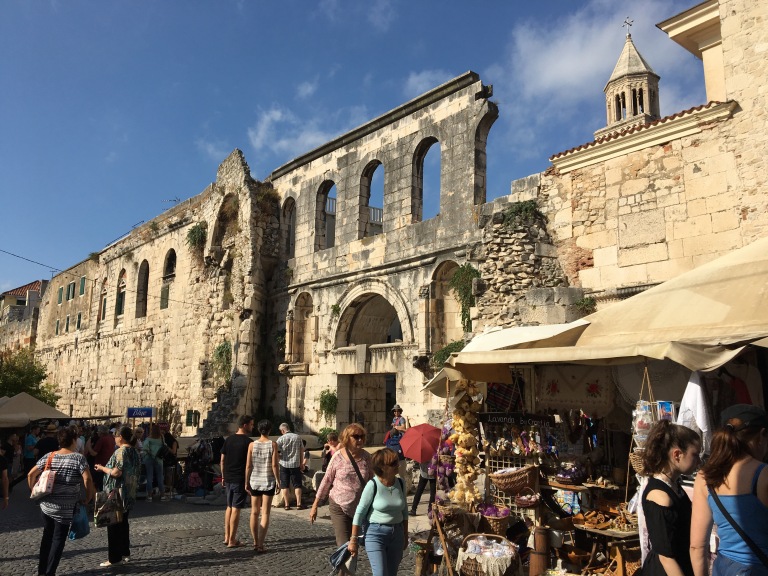 There is a very cool clock with 24 hours. 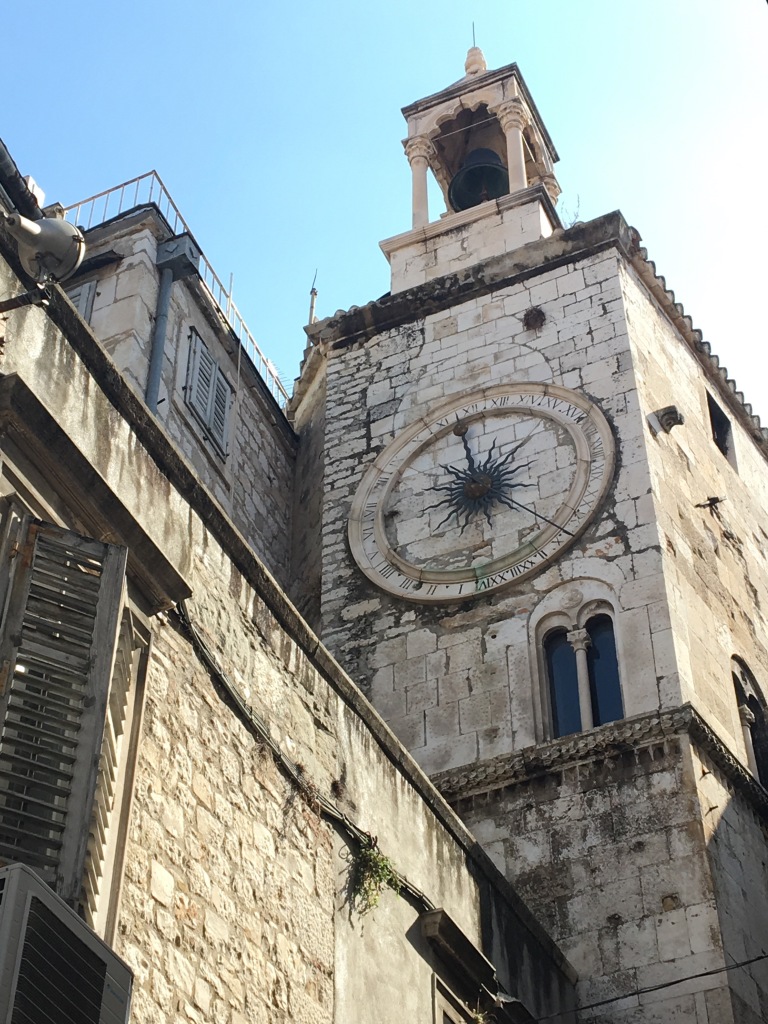 Running down to the Riva is Marmont street, which I like because of the ocean view at the end! It’s also the only straight shopping street!

I walked up to a viewpoint in Marjan, but the park extends all the way west. 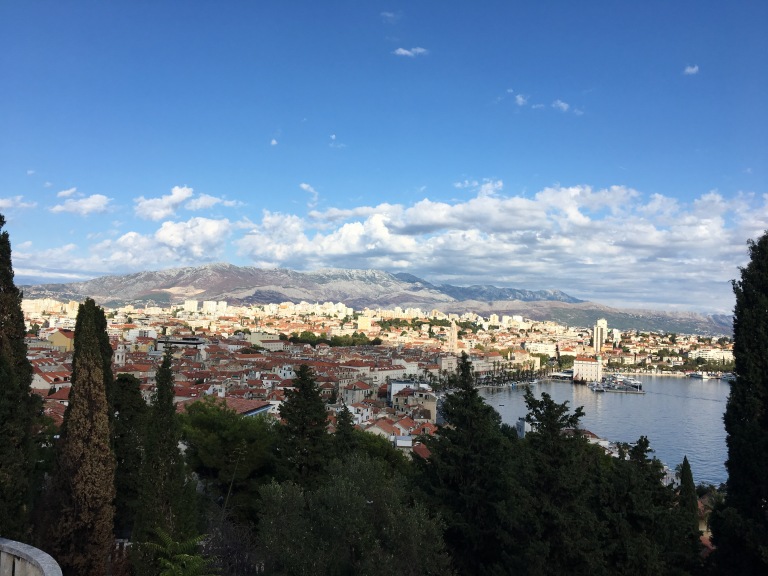 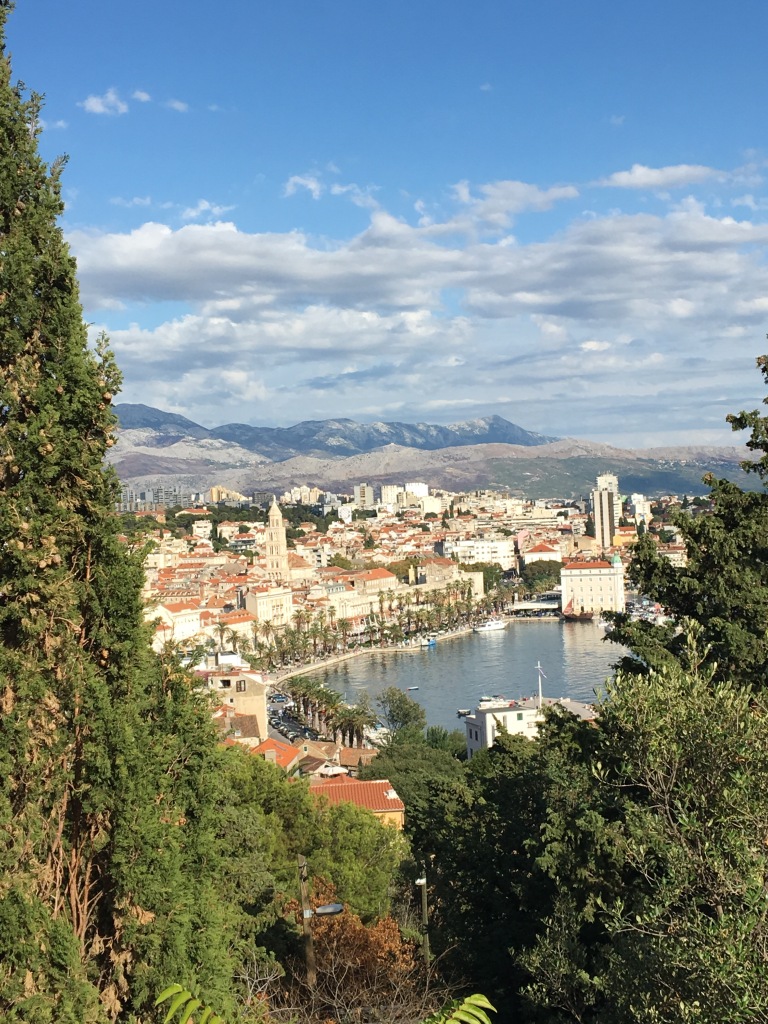 The harbour is very busy with ferries, cruise ships (Cunard’s Queen Elizabeth was in port yesterday), private yachts, and dozens of small boats.

I did walk around the point, though, to see the swimming beach. Split is full of young backpackers, but also tourists of all ages.  One of sounds I constantly hear is the ‘click click’ of wheeled suitcases on the cobble streets. 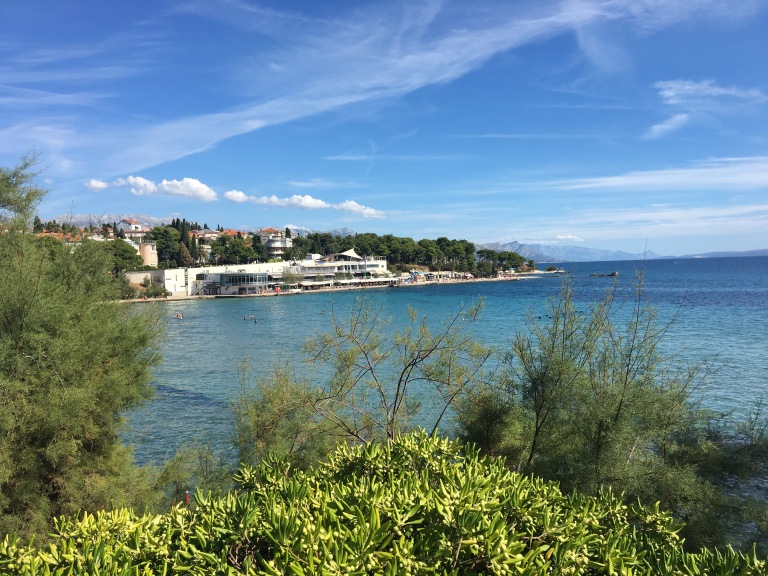 I woke up Sunday morning to the sound of church bells, and then heard singing from the church close to my apartment. I went out, but quickly found shelter as there was cracking thunder and lightning storm with torrential rain and hail – at 1030 in the morning! 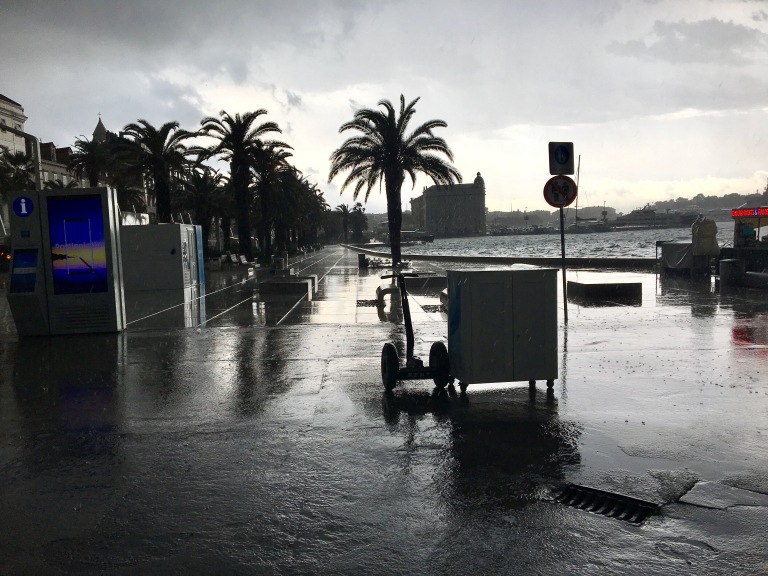 Then as quickly as it started, it ended. Five minutes later the sun and people came back out.  And shop owners were busy sweeping up the damage. 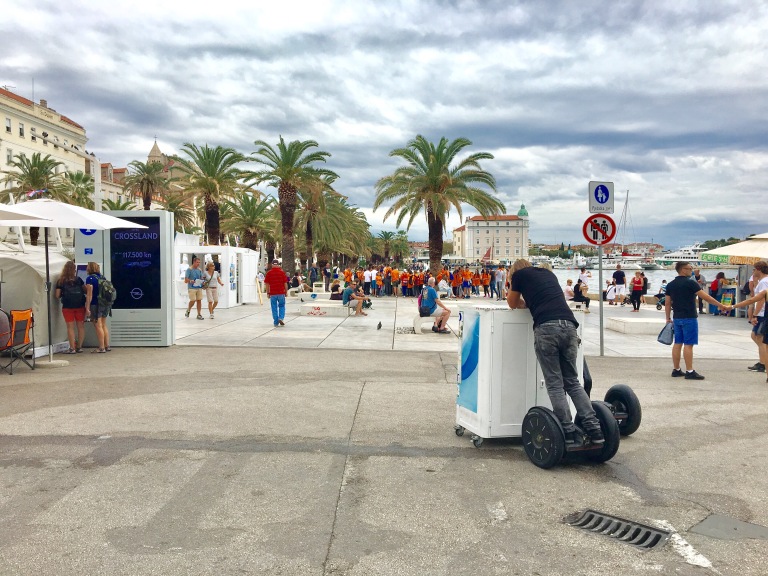 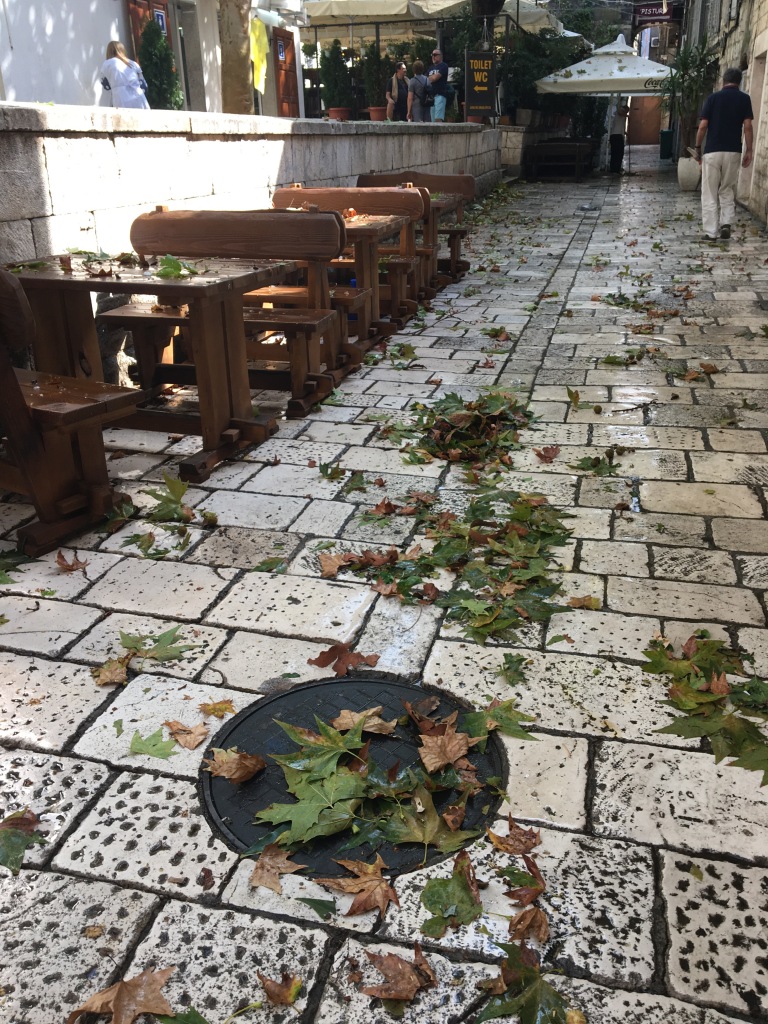 This morning I could see men in uniforms carrying instruments down the street, so I had to check it out.  It took a while for it to finally happen, but the navy was celebrating 26 years and they had a big show of ships and standing at attention. 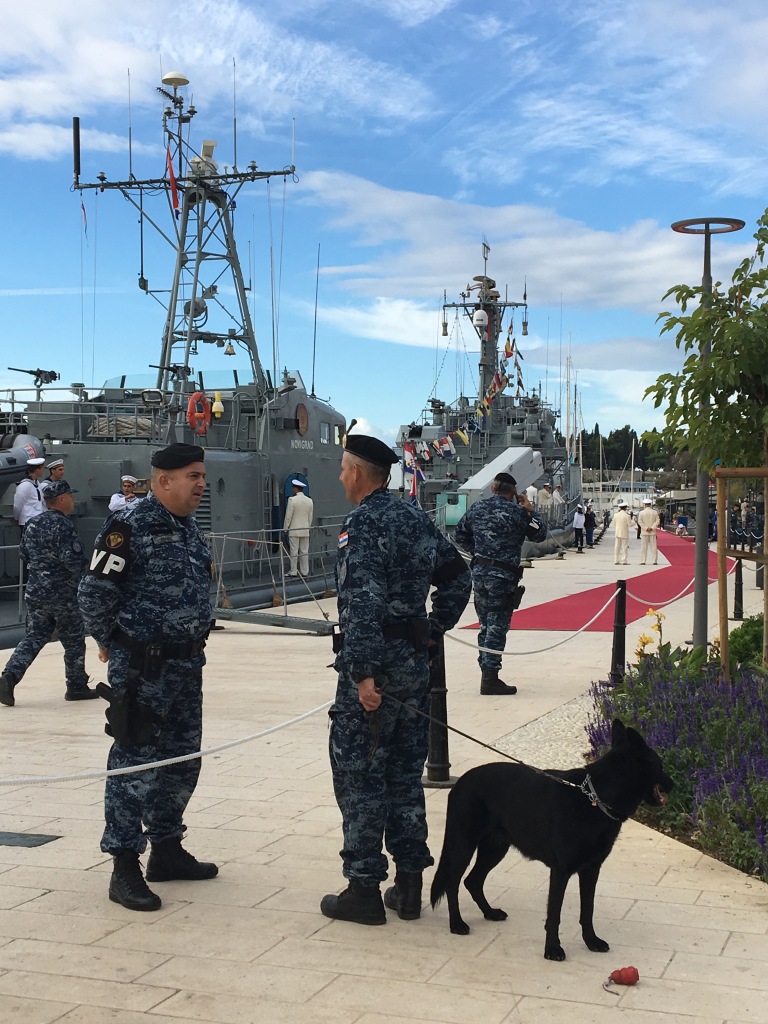 I was originally booked into an apartment for four nights, but decided to change part way through.  I had not been careful in checking the details when I booked, and had a ‘room’, rather than an apartment. I just can not spend four days without something besides a bed to sit at on!

Anyway, I’m still right in the old town, on the end of Riva. Old, old buildings! I’m the top left green shutters. And that’s my yacht parked at the end of the street 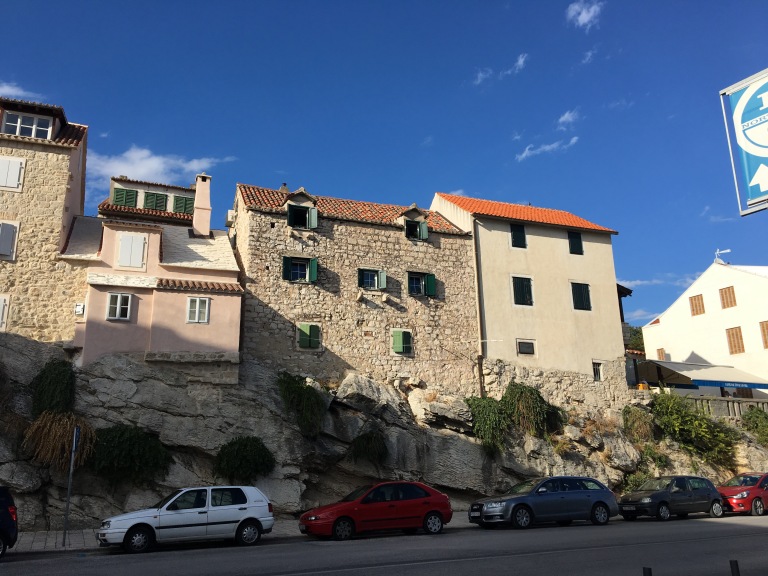 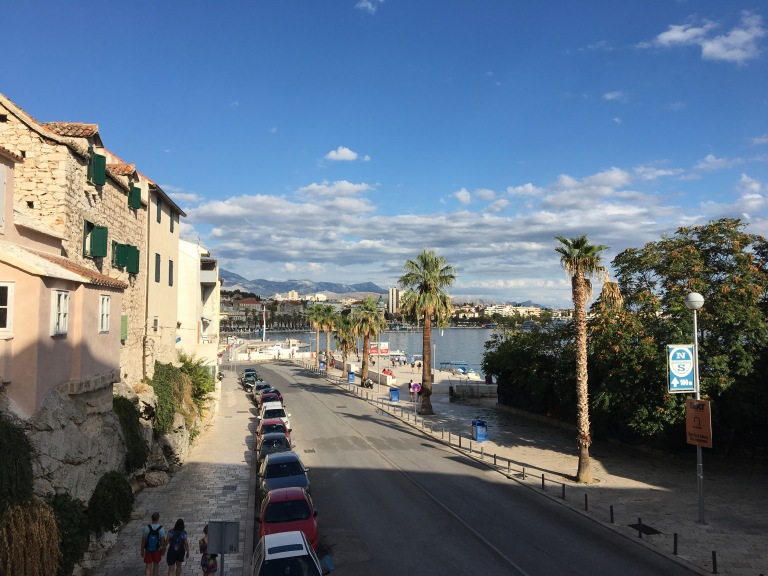 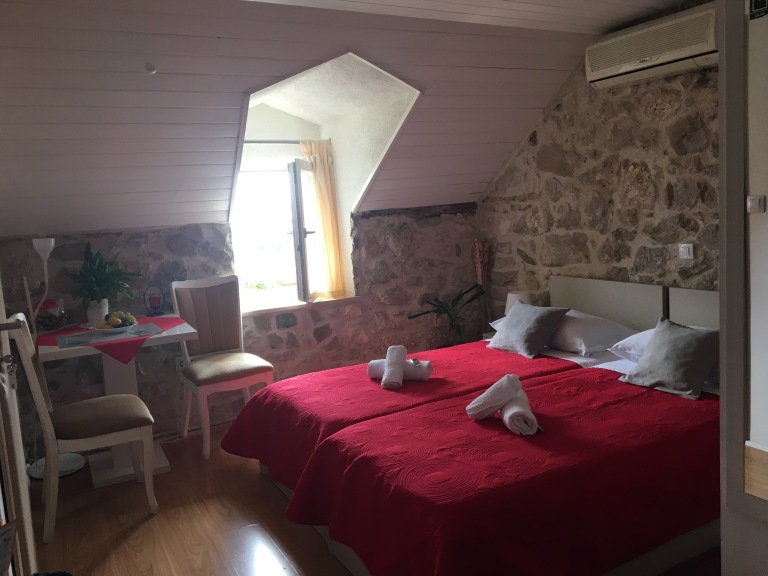 And I found markets and restaurants!  They have their prosciutto too. Very Italian feel to the food but not surprising given they are just a hop across the Adriatic Sea… gelato, espresso, pizza, sea bass, sea bream, gnocchi.  There was one new food for me, and that is cevapvici.  Delicious!  I’ve included the local website definition! 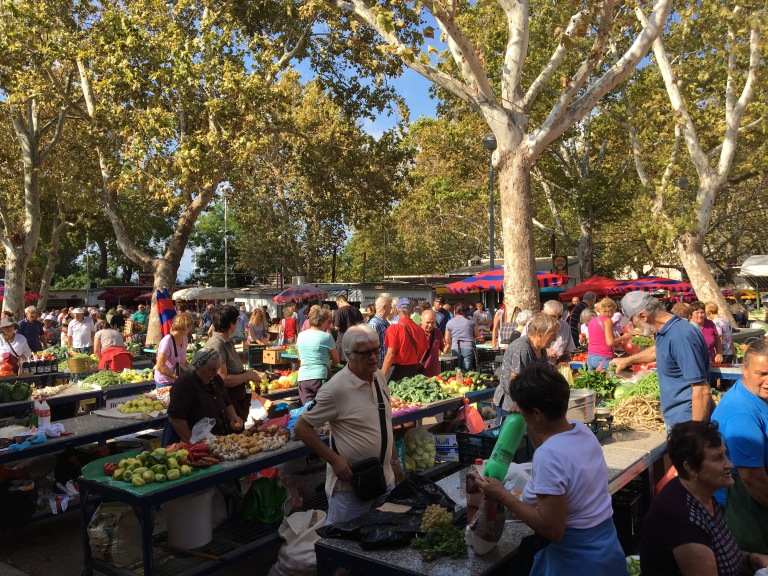 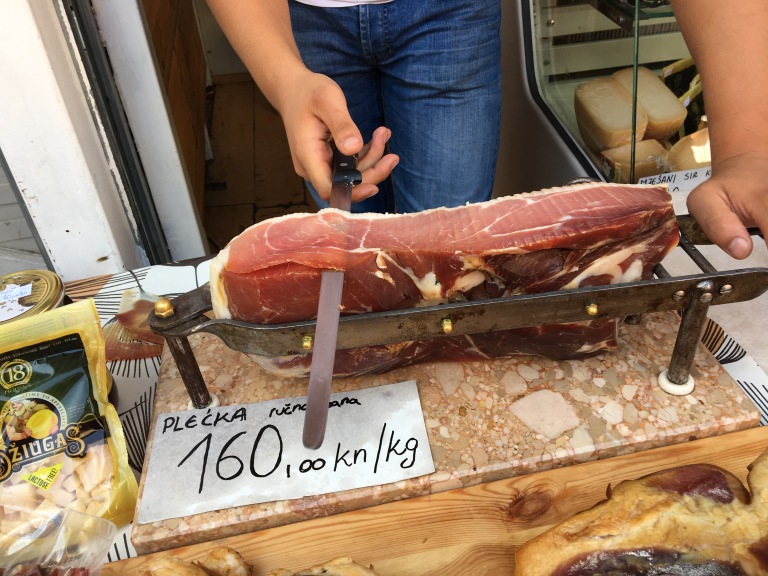 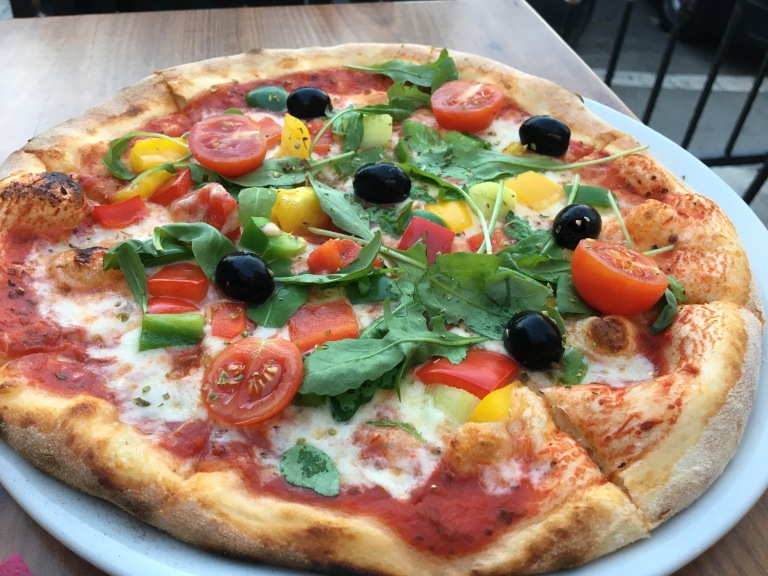 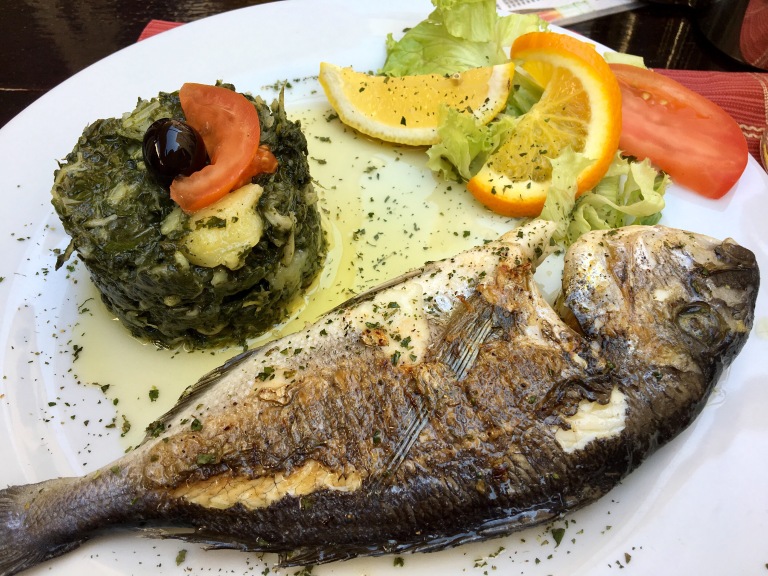 Tomorrow I’m off to the Croatian island of Korcula.  I have a ticket on the 1045 car ferry.  I was speaking to a nice Swedish man, who just bought a house there with his Croatian girlfriend, and was back to supervise renovations. He said the fast catamaran ferry can have rough crossings, and even be canceled.   He said the route is very scenic, but unfortunately more thunderstorms are forecast for tomorrow, so we will see…

2 thoughts on “Sights and Sounds of Split”